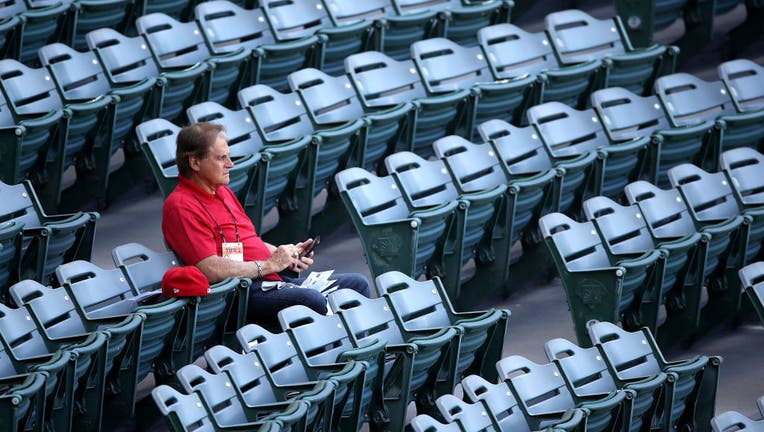 Special Advisor Tony La Russa of the Los Angeles Angels looks on during their summer workout at Angel Stadium of Anaheim on July 08, 2020 in Anaheim, California. (Photo by Sean M. Haffey/Getty Images)

PHOENIX - White Sox manager Tony La Russa says he doesn’t have a drinking problem. He also says he has to prove that with his behavior.

The 76-year-old La Russa pleaded guilty Monday to a lesser charge to resolve misdemeanor drunken driving charges stemming from his arrest nearly 10 months ago on a freeway in metro Phoenix.

La Russa also pleaded guilty to driving under the influence in Florida in 2007 after police found him asleep inside his running SUV at a stop light and smelling of alcohol. After the 2007 case was resolved, La Russa accepted responsibility and said it would never happen again.

La Russa’s Arizona arrest occurred Feb. 24, but the charges were filed Oct. 28 — one day before he was hired to manage the Chicago White Sox. He pleaded guilty to reckless driving in Maricopa County Justice Court and was sentenced to one day of home detention, a fine of nearly $1,400 and 20 hours of community service.

Authorities say La Russa, who won a World Series with Oakland and two more with St. Louis, blew out a tire on the grey Lexus he was driving. The Hall of Fame manager smashed into a curb, leaving the vehicle smoking. Tests taken the night of his arrest showed his blood alcohol concentration was .095 — above the legal limit of .08.

La Russa said he feels "deep remorse and regret" about what happened. He underwent 20 hours of alcohol counseling after his arrest, which he described as "very helpful."

"It’s impossible to explain how daily and deeply this gets at you and has bothered me for a long time," he said. "Obviously I displayed bad judgment that night in February."

La Russa, the oldest manager in the majors, was hired by Chicago in a surprise move after Rick Renteria was let go in what the team said was a mutual decision. He is friends with White Sox owner Jerry Reinsdorf and started his managing career with the team during the 1979 season.

He is returning to the dugout for the first time since 2011, when he led St. Louis past Texas in the World Series.

La Russa said he let the White Sox know about his arrest when they expressed interest in him for the manager job.

"Before the conversations got serious at all, I made sure that I informed them that there was this mistake situation in February that was now getting close to coming to some kind of conclusion," he said, "and their decision was that it is a mistake, they know how serious it is, but they decided to support me and I appreciate them for that."

Coming off their first playoff appearance since 2008, the White Sox are regarded as one of baseball’s up-and-coming clubs heading into next season. But skepticism about the hiring of La Russa was compounded by his arrest, making a dent in the positive picture surrounding the franchise.

The team said Monday in a statement that it understands "the anger and concern expressed by some about hiring Tony under these circumstances." It also said La Russa knows "there is no safety net below him."

"Tony has a proud and productive history with the White Sox and Major League Baseball, which is why we are standing by him," the team said. "He has done his job exceptionally well in the past. He has always shown an ability to inspire his players and to bring his teams to a championship level. We are confident that Tony will improve our team, while improving himself."