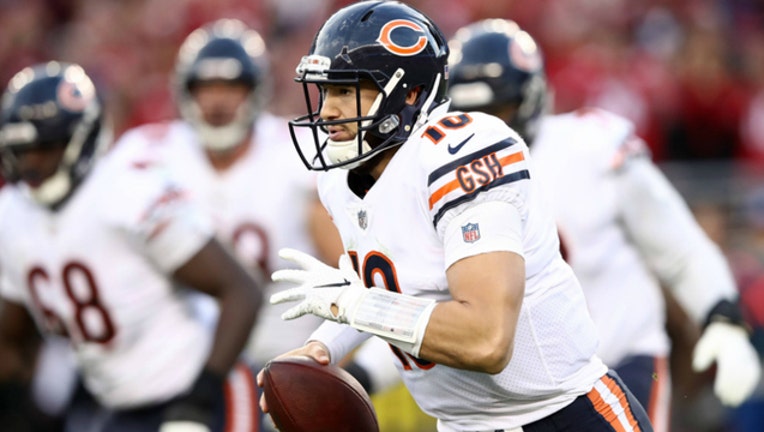 BOURBONNAIS, Ill. (AP) - The Chicago Bears' offense hasn't progressed to a point where it can consistently beat the defense at practice. Then again, few teams could.

"I mean, I don't think a defense has existed like this," offensive coordinator Mark Helfrich said Friday after practice.

Players and coaches look ahead to when they're game-planning opponents instead of going against their own first-team defense, all while downplaying an early lack of rhythm in their passing game between receivers and quarterback Mitchell Trubisky.

"He's not where we want him to be yet," second-year coach Matt Nagy said about Trubisky. "He knows that. I think right now, the best part for us is we're getting a lot of different looks (from the defense), and we're moving people around in different spots.

"And we're just watching him grow. He's leaps and bounds further than he was last year."

"I'm looking at mistakes and I'm looking at areas I've grown in, and then when we have a mistake on the field, make sure I'm talking to my guys and make sure we're fixing it," Trubisky said earlier in the week.

Trubisky said he is realistic as he tries to lead the Bears back from a 21st ranking both in offense and passing offense.

"Just continue to criticize myself and try to be a perfectionist, but I see the growth as well," Trubisky said. "It's practice. You're going to make mistakes. They're meant to be made, but you've got to come back and correct them and get better each day."

Trubisky's deep passing has been spotty, in particular.

"Deep ball right now ... they're probably not (completing) as much as last year, just because right now we feel pretty good with knowing we can do that," Nagy said. "We'll keep it going. And that stuff is going to come. He knows how we do things. He knows our mentality of touchdown-to-checkdown. So I'm not really concerned with that."

"You're never going to have great practices all the time," Nagy said. "If there really was a practice that was just OK, when it's kind of choppy, what I'm looking for is how does he handle that situation? Does he mope? Does he put his head down? Or does he freaking get ready for the next play and get ready to roll?"

Frustration hasn't set in yet, according to second-year wide receiver Anthony Miller.

"You've gotta remember, Mitch, he's young just like us," Miller said. "He came into this brand-new offense just like us and I know it's gotta be very different for a quarterback. That's the hardest position on the field, in my opinion, because you have to know the play each and everybody is doing.

"We're just following Mitch with whatever his plan is, we're following."

The Bears anticipate the offense can take shape when all components have been worked through at camp, but the running attack is still being blended with the pass.

Rookie running back David Montgomery and veteran Mike Davis on Friday got their first real rushes against live tackling for an extended period. The same problem afflicted the rushing attack as the passing game - inconsistency.

Montgomery broke several tackles on one hard-charging run late in practice, but earlier the first-team offense was beaten by the second-team defense for a safety on a running play.

Pressure from the first-team defense has been as rough overall on run blocking, but Helfrich called it understandable considering the opponent.

"Sometimes when you draw up the play and you have the "O'' blocking the "X," and the "X'' is Khalil Mack, that's a bad matchup for a lot of Os," Helfrich said.

Rookie guard Alex Bars from Notre Dame suffered a knee contusion and left practice on a cart, but Nagy doubted the injury was serious. ... Tight end Adam Shaheen worked extensively with the offense a second day after missing several days with back pain. ... Rookie receiver Riley Ridley remains out after suffering a hamstring injury in the first practice July 26.