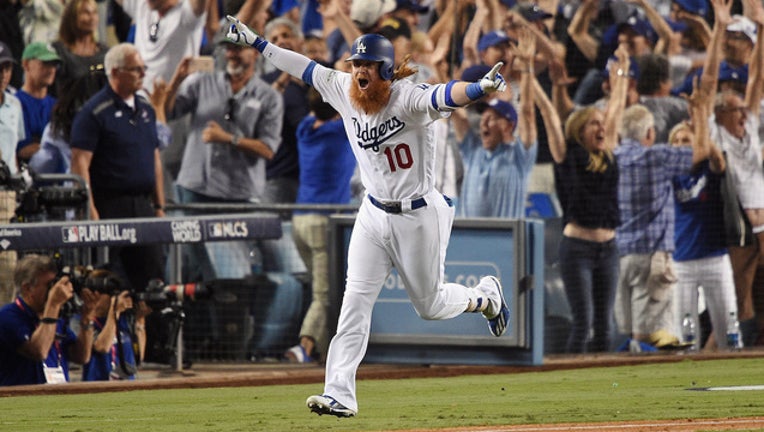 Justin Turner of the Los Angeles Dodgers celebrates after hitting a walk off three-run home run in the ninth inning to defeat the Chicago Cubs 4-1 in game two of the NLCS at Dodger Stadium. (Kevork Djansezian/Getty Images)

LOS ANGELES (AP) - Justin Turner hit a three-run homer with two outs in the bottom of the ninth inning, and the Los Angeles Dodgers beat the Chicago Cubs 4-1 on Sunday to take a 2-0 lead in the NL Championship Series.

Turner drove in every run for Los Angeles, going the other way for a tying single in the fifth before sending a long shot to center field off John Lackey in the ninth. A fan wearing a blue Dodgers jersey reached over a railing to catch the ball on the fly.

Turner's second homer of the postseason ended another dramatic night for the Dodgers, who remained unbeaten in these playoffs and moved within two wins of their first World Series appearance since 1988.

And the red-bearded slugger even did it on the 29th anniversary of Kirk Gibson's pinch-hit, walk-off homer to beat Oakland in the opening game of the Dodgers' last World Series victory.

"It's very cool, and J.T., we were talking about it in there after the game," Dodgers manager Dave Roberts said. "Twenty-nine years to the day. It was special. Our guys feel it."

Game 3 in the best-of-seven series is Tuesday night at Wrigley Field in Chicago. Midseason acquisition Yu Darvish starts for the Dodgers against Kyle Hendricks.

Yasiel Puig drew his third walk of the game leading off the ninth, and Charlie Culberson bunted him to second. After Brian Duensing struck out pinch-hitter Kyle Farmer, Chicago manager Joe Maddon went to the bullpen for the 38-year-old Lackey, who pitched on consecutive days for the first time in his 15-year career.

Lackey got the call over All-Star closer Wade Davis, and the veteran starter walked Chris Taylor on six tense pitches.

Turner stepped up and ended it with his long drive - the fourth playoff homer of his career and the Dodgers' first walk-off homer in the postseason since Gibson's famous shot.

"We've been doing it all year long," Turner said. "We're never out of a game. As long as we have outs left, we're going to keep fighting."

Completing the poetry of the moment, a fan in a Chase Utley jersey in the center-field bleachers caught the ball in his glove.

Turner has been at his best in October, batting .377 with four home runs and 22 RBIs in his postseason career.

Addison Russell homered in the fifth for the Cubs, who are down early in this rematch of the 2016 NLCS. Chicago won that series in six games and went on to its first World Series championship since 1908, while the Dodgers have been absent from the Fall Classic since 1988.

Dodgers closer Kenley Jansen got the victory with a hitless ninth despite hitting Anthony Rizzo on the hand with a one-out pitch. That ended the Los Angeles bullpen's impressive streak of 22 straight Cubs retired to begin the NLCS, but the Dodgers have thrown eight hitless and scoreless innings of relief in the NLCS.

After a collective offensive effort drove the Dodgers to a 5-2 win in Game 1, Turner did it all in Game 2. He has 10 RBIs in the Dodgers' five postseason games, getting five in the playoff opener against Arizona.

Jon Lester yielded three hits and five walks while failing to get out of the fifth inning in the shortest start of his long postseason career, but the Dodgers couldn't take advantage of a rare shaky night by the Cubs' star left-hander.

Rich Hill struck out eight in five more impressive innings for the Dodgers, but he was pulled for pinch-hitter Curtis Granderson in the fifth in a debatable decision by Roberts.

Russell was off to a 4-for-22 start in the postseason with nine strikeouts before the slugging shortstop put a leadoff homer into the short porch in left field.

Turner evened it moments later by poking a single to right after a leadoff double by Culberson, the Dodgers' improbably successful replacement for injured All-Star shortstop Corey Seager.

The Dodgers chased Lester with two outs in the fifth, but reliever Carl Edwards Jr. came through after several recent postseason struggles, striking out pinch-hitter Chase Utley and then pitching a strong sixth.

Lester was the co-MVP of last season's NLCS, winning Game 5 at Dodger Stadium and yielding two runs over 13 innings in the series. He had nothing near the same success against the Dodgers' revamped lineup in this one, issuing four walks in the first four innings and repeatedly escaping jams.

Dodgers third base coach Chris Woodward held up Turner in the third when it appeared he could have scored from first on Cody Bellinger's double to the gap.

Javier Baez, the other co-MVP of last season's NLCS for Chicago, got to third base in the third with one out, but also was stranded.

Cubs: Hendricks dominated Chicago's playoff opener with seven scoreless innings against the Nationals, but yielded four runs in four innings during the team's wild Game 5 victory in Washington. He is starting on normal rest.

Dodgers: Darvish was outstanding in Game 3 against the Diamondbacks, earning his first career postseason victory with seven strikeouts over five innings of two-hit ball. He was acquired from Texas precisely for these moments, and he starts on seven days of rest.