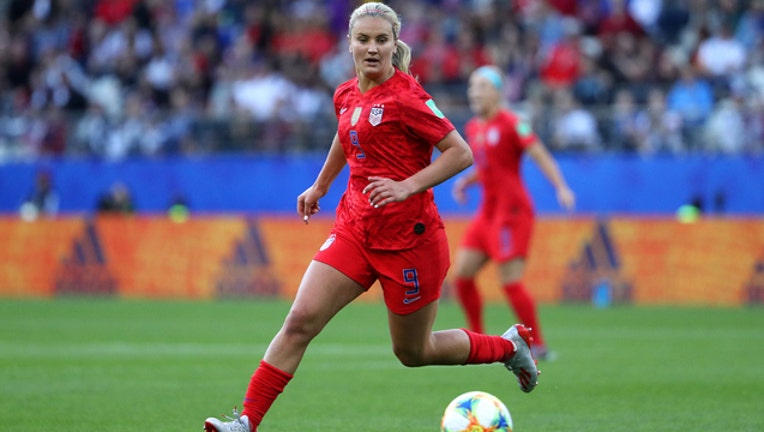 PARIS (AP) - The United States gets back on the field at the Women's World Cup on Sunday, just as the uproar following its opening 13-0 win is quieting down.

Criticized for both running up the score against Thailand and celebrating each of its record-breaking 13 goals, the Americans have dismissed the scrutiny and focused only on their bid to win a fourth World Cup title. The next challenge is against Chile in a Group F match at Parc des Princes.

A win for the U.S. would move the squad into the round of 16, and Chile understands the challenge it is facing against the top team in the world.

"We don't go on to the pitch thinking of losing by a small margin," Chile forward Yanara Aedo said. "We go out to get something, at least a point. It's not a victory to lose by a small margin against the USA. A victory for us is to play well, to the best of our capabilities, and playing the way we know to play."

Chile lost to Sweden 2-0 in its opener and coach Jose Letelier is not looking back at that match, or the United States' game against Thailand.

"Even if the results had gone another way, we're not going to compare any other way. We're not going to be focusing on a match that's gone by, someone else's match. We're going to focus on our own match," he said. "I think for our national team, it's an experience in itself even to play at this elite level.

"We're very clear what we're up against and we're going to take all the necessary precautions and we're just going to basically try to show what we can do on the pitch."

The United States is on cruise control and coach Jill Ellis has the ability to make tweaks to her lineup if she wants to rest some of her players. There are only three days of rest between matches for the rest of the tournament, and the Americans have a deep and talented bench of some of the best players in the world.

SWEDEN-THAILAND: The World Cup opener could not have gone worse for Thailand, which was humiliated 13-0 by the United States in the game that has received the most attention so far in this tournament.

Next up for Thailand is a Group F match against Sweden at Stade de Nice, and the Swedes can advance into last 16 with a win. But the Scandinavians may also try to run up the score in an attempt to level the goal differential with the Americans. If Sweden and the United States both finish with the same amount of points in the group, the team with the better goal difference would finish first.

"We don't know how important it will be to score a lot of goals, and you can't go out to a match and decide to score a lot of goals," Sweden coach Peter Gerhardsson said. "We have to focus on our performance and how we want the match to go. We have a plan for this match. We are going to do everything in our power to win this game, and what the result is? That remains to be seen afterwards."

Thailand coach Nuengrutai Srathongvian believes even though her squad lost by the largest margin in World Cup history, the encouragement from supporters has lifted their spirits and prepared them for another match.

"We have to admit that we were really disappointed by the opening game," Srathongvian said. "But after the match we received support from many stakeholders, and the players have been through this, many times. Now everybody is mentally ready to play."

Sweden is ranked ninth in the world, won the silver medal at the 2016 Rio de Janeiro Olympics and has high expectations for the World Cup.

RECAPPING SATURDAY: Jessie Fleming and Nichelle Prince each had second-half goals and Canada advanced to the knockout round at the Women's World Cup with a 2-0 victory over New Zealand. Fleming, who made her debut with the senior national team at 15, currently plays for UCLA. The Canadians had never advanced from the group stage when playing outside of North America. ... The Netherlands earn a spot in the second round with a 3-1 win over Cameroon in Valenciennes. Vivianne Miedema scored a goal in each half, and Dominique Bloodworth also scored for the Netherlands. Gabrielle Onguéné got Cameroon's goal in the 43rd. Cameroon is in last place in the group, with no points and a minus-3 goal difference, and it is all but eliminated. Cameroon plays New Zealand on Thursday, and the Netherlands meets Canada in a match that kicks off at the same time.