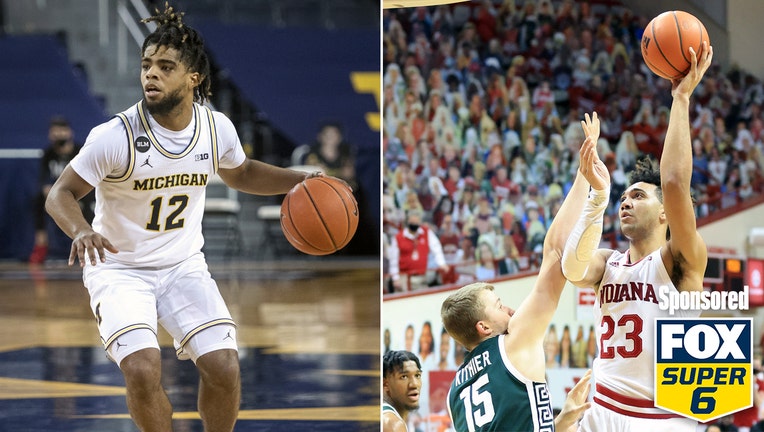 Everyone knew that the Big Ten was going to be the best conference in America when this college basketball season began. Nobody could have expected Michigan, however, to become the hottest team in America’s best conference.

Thursday night’s win over 79-57 win over No. 8 Iowa in Ann Arbor - fresh on the heels of an impressive 92-87 win at Ohio State on Sunday - leaves little doubt who the best team in the conference is right now. And now, Michigan has its fate for a top seed in the NCAA Tournament in its hands as it heads to 12-11 Indiana on Saturday (12 noon, FOX) for a showcase contest.

And you could win $1,000 with FOX Super 6. Just pick the correct answer to the following six questions and you could take home the grand prize. It’s easy, fun and free to play. Just download the Super 6 app on your phone or tablet device.

Here are the questions and how to look at it:

Which team will have the most bench points?

Michigan has been really good in all aspects of the game and is averaging 25 points a game coming off its bench this season. Indiana, on the other hand, is averaging about 13 points a contest off the bench.

What will Michigan’s Field Goal percentage be for the game?

What will Indiana’s Field Goal percentage be for the game?

How many points will Michigan score in the game?

Michigan’s average is 79 points a game- which includes the 79 point performance against Iowa on Thursday night. Indiana is averaging yielding 69.9 points per game.

How many points will Indiana score in the game?

The Hoosiers are not as explosive as the Wolverines, but they can still score. Indiana is averaging 72.1 points per game. However, they have been struggling in recent weeks, losing three out of four including losses to Ohio State, Michigan State and at Rutgers on Wednesday night – an ugly 74-63 loss at the RAC.

Pick the team to win and by how many points.

Right now, Michigan is playing at a different level than almost anyone else in the country not named Gonzaga or Baylor. They are making good teams look awfully bad at some times. While Indiana is teetering on the bubble, going against Michigan to solidify its spot is not ideal. But in this Big Ten season, nothing can be ruled out.