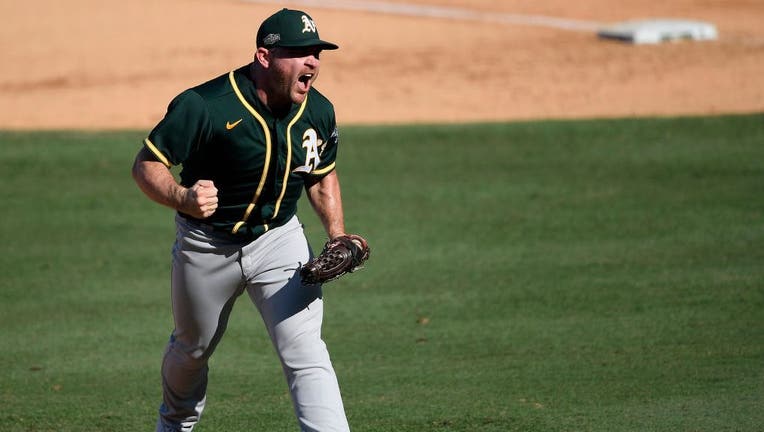 CHICAGO - The Chicago White Sox have finalized a $54 million, three-year deal with Oakland Athletics closer Liam Hendriks, another big move as they set their sights on a championship run.

A 10-year veteran, Hendricks spent the past five seasons with Oakland.

The 31-year-old right-hander from Perth, Australia, took over as the Athletics’ closer during the 2019 season and finished with 25 saves and a 1.80 ERA. He dominated again last year, finishing second in the majors with 14 saves while posting a 1.78 ERA and averaging 96.5 mph with his fastball. He earned $1,962,963 in prorated pay from a $5.3 million salary.

Oakland won the AL West and advanced to the playoffs for the third straight season.

"With the acquisition of Liam, we are adding another premium talent to our core group of players," general manager Rick Hahn said in a statement. "Liam is someone of outstanding character and makeup who will be an asset both on the field and in the clubhouse."

Hendriks was on the mound when Oakland eliminated Chicago in Game 3 of their wild-card series.

He retired Nomar Mazara on a called third strike and let out a howl and pumped his arms before receiving hugs. Hendriks figures to take over for free agent Alex Colomé, who saved 42 games over the past two years.

The White Sox made the playoffs for the first time since 2008 and ended a string of seven losing seasons. They tied Cleveland for second place in the AL Central behind Minnesota at 35-25.

With AL MVP José Abreu in the middle of the lineup and young stars such as 2019 major league batting champion Tim Anderson and ace Lucas Giolito, the rising White Sox are one of baseball’s most promising teams.

They’ve been busy since the final out, trying to push themselves closer to their first World Series championship since 2005.

The White Sox hired Tony La Russa, the Hall of Famer who won a title with the Oakland Athletics and two more with the St. Louis Cardinals, 34 years after they fired him. He replaced Rick Renteria, who was let go in what the team said was a mutual decision.

Chicago also acquired Lance Lynn from Texas, adding a durable frontline starter to go with Giolito and Dallas Keuchel. And the White Sox signed outfielder Adam Eaton, who helped Washington win the World Series in 2019, for a second stint.