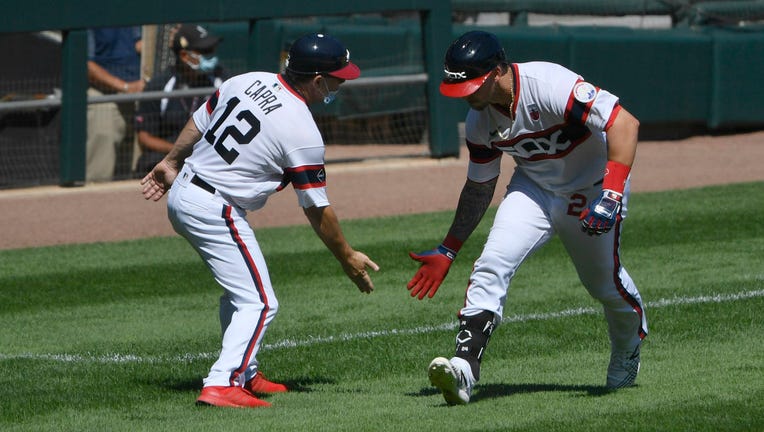 Yasmani Grandal of the Chicago White Sox celebrates after his home run in the fifth inning against the St. Louis Cardinals at Guaranteed Rate Field on August 16, 2020 in Chicago, Illinois. (Quinn Harris/Getty Images / Getty Images)

CHICAGO - St. Louis Cardinals reliever Roel Ramirez set a record in his debut — just not the kind any pitcher wants.

The Chicago White Sox tied a major league mark with four consecutive home runs, all against Ramirez, and went on to beat the Cardinals 7-2 on Sunday.

“Clearly, it gets you on your heels,” Cardinals manager Mike Shildt said. “One of the reasons we liked Roel in spring training ... was the fact that he was not afraid to go after guys. He’d get after it.”

Ramirez took the mound in the fifth with Chicago leading 1-0. He struck out Luis Robert to start, but things went south quickly. After two singles, a caught stealing and a walk, Moncada smacked a three-run homer to right.

Grandal followed with another drive into the right-field seats, and then Abreu and Jimenez each homered to left.

“It feels good every time that you hit a home run,” Moncada said through an interpreter. “But it feels better when you’re a part of history. ... It’s definitely something special for all of us. I am very happy for it.”

Shildt replaced Ramirez with the debuting Seth Elledge, and he struck out Edwin Encarnacion on three straight pitches to end the inning.

Ramirez is among the players promoted by the Cardinals following a COVID-19 outbreak that stalled St. Louis’ season for 2 1/2 weeks. The club returned to action Saturday with a doubleheader sweep over Chicago.

“He got his first punchout today in the big leagues, which is pretty cool,” Shildt said. “I have every confidence he’s gonna go out and be aggressive when he gets an opportunity again.”

It was the 10th time in major league history a team hit four straight homers. The only other time the White Sox did it was on Aug. 14, 2008 against Kansas City, when Jim Thome, Paul Konerko, Alexei Ramirez and Juan Uribe connected.

For Chicago, it was a big improvement after combining for just six hits in the doubleheader.

“It was a big inning, a huge inning,” White Sox manager Rick Renteria said. “We needed something like that to kind of spark us. Albeit just one game, but certainly signs of the things that are capable of being done.”

The White Sox got another solid start from Dallas Keuchel (3-2) and won for just the third time in 11 home games.

St. Louis’ Dakota Hudson (0-2) held the White Sox to a run and two hits over four innings in his first start since July 26. But the Cardinals fell to 4-4. Every other team had played at least 14 games coming into the day.

Cardinals: LHP Austin Gomber could rejoin the club Monday and start the second game of a doubleheader against the Chicago Cubs at Wrigley Field, Shildt said. He was placed on the injured list because he came up as a potential concern in contact tracing, though he did not test positive for COVID-19.

White Sox: Keuchel said his back tightened but wasn’t worried about it. ... RHP Reynaldo López (shoulder soreness), who threw Friday, is scheduled for another session Monday.

Cardinals: The Cardinals head to the North Side for five games in three days against the Cubs, starting with a doubleheader on Monday. St. Louis will go with LHP Kwang Hyun Kim (0-0, 9.00 ERA) in the opener and a bullpen start in the nightcap. RHP Kyle Hendricks (3-1, 3.08) starts the opener for Chicago. The Cubs have not said who will start the second game.

White Sox: LHP Gio González (0-1, 6.61) gets another shot at the Tigers and his first Chicago win. The veteran, who was drafted by the White Sox in 2004 and signed with them in the offseason, wasn’t thrilled when he got pulled one out shy of the victory Tuesday after holding Detroit to two runs in 4 2/3 innings. LHP Matthew Boyd (0-2, 10.24) starts for the Tigers.