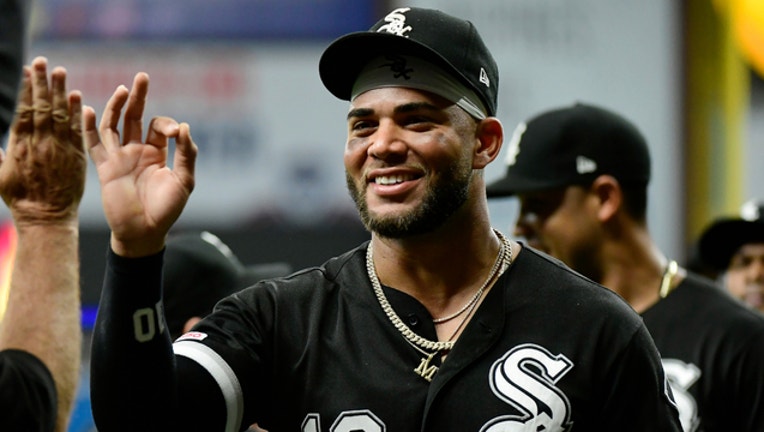 ST. PETERSBURG, Fla. (AP) - Yoán Moncada scored from first base on a single in the 11th inning and the Chicago White Sox beat the Tampa Bay Rays 2-1 on Saturday night.

Moncada drew a walk off Adam Kolarek (3-3) to lead off the 11th, and sprinted around the bases when José Abreu punched a single into right field off Chaz Roe.

The loss was Tampa Bay's season-high fifth straight and dropped the Rays 10 games behind the AL East-leading New York Yankees.

James McCann's home run off Emilio Pagán had tied the game with two outs in the top of the ninth.

Avisaíl García led off the Tampa Bay seventh with a long home run off Lucas Giolito to break a scoreless tie. His first homer since June 29 struck a banner over the upper deck above left field at Tropicana Field. It was his 13th of the season.

Rays outfielder Kevin Kiermaier, who entered the game as a defensive replacement in the eighth, left after injuring his left hand while beating out an infield single with a head-first slide. The Rays called the injury a left thumb sprain and will re-evaluate the injury on Sunday.

Kiermaier missed much of last season with torn ligaments in his right hand, and broke his left wrist in 2016.

Rays starter Ryan Yarbrough, who pitched six perfect innings of relief Sunday at Baltimore before giving up a ninth-inning single, was perfect through the first four innings again Saturday. McCann, who entered the game on a 1-for-20 stretch, led off the fifth with a clean single, Chicago's first hit and one of only two off Yarbrough in six innings.

Giolito had one of his his best starts since making the AL All-Star team by winning eight straight starts in May and early June. He struck out nine in 6 2/3 innings while giving up seven hits and one walk.

The Rays are 2 for 32 with runners in scoring position during their skid.

Rays manager Kevin Cash tweaked his lineup by having 1B Ji-Man Choi hit leadoff for the first time in his major league career, and García made his first regular-season start in center field since 2013. "We're trying to get something to spark us," Cash said. Through a translator, Choi said he was "surprised," while García had "1,000 percent" confidence in playing center.

White Sox: RHP Kelvin Herrera was placed on the 10-day injured list retroactive to Thursday with a right oblique strain. ... SS Tim Anderson (right ankle sprain) will be evaluated in Chicago on Monday before going on a rehab assignment. ... OF Eloy Jimenez (right ulnar nerve contusion) is waiting for the inflammation to go down before resuming baseball activities.

Rays: RHP Ryne Stanek was placed on the 10-day injured list due to nagging right hip soreness. Cash is hopeful that the reliever-opener will have a short stint on the IL. ... Roe (right flexor strain) was reinstated from the 10-day IL.

RHP Dylan Chase (1-1) will make his third career start for the White Sox on Sunday against LHP Blake Snell (5-7) in the series finale.