History of the World Cup

How the World Cup became the world's most popular sporting event.

Because they're young and millennial and fraternal, the United States players would rather go without specifically defined positions of hierarchy.

But rules are rules, and the World Cup regulations are there to be followed.

And so, a few days before the tournament began, a ballot took place in the USA's hotel, the opulent Marsa Malaz Kempinski in Doha's swanky Pearl district. The vote was cast in a team room specifically set up with ping-pong and pool tables, comfy couches and mood lighting, and a big backdrop that reads: "One Nation. One Team."

On Nov. 17, FOXSports.com broke the news that Adams had been overwhelmingly voted in as captain by his fellow players.

Exactly two Saturdays later, virtually to the minute, the 23-year-old from Poughkeepsie, N.Y. — and now of the English Premier League's Leeds United — will tug on the armband and lead his team out against the Netherlands in the Round of 16 at Khalifa International Stadium (10 a.m. ET on FOX and the FOX Sports app).

This squad will try to pull off what would arguably be the USA's most important World Cup win … ever.

Everything Adams has done in the fortnight between those moments has added up to an unshakable conclusion.

His teammates knew what they were doing.

"Tyler fits a very specific role," Berhalter said, after Tuesday's advancement-sealing 1-0 victory over Iran. "He is the general. He is the strategist. He's the guy that goes out there and leads by example. When he talks, people listen." 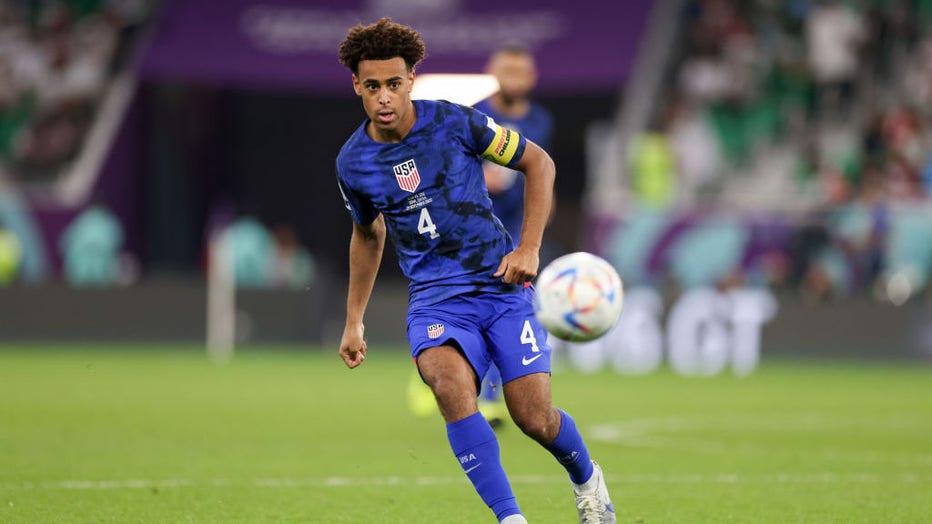 Tyler Adams #4 of the United States passes off the ball during a FIFA World Cup Qatar 2022 Group B match between Iran and USMNT at Al Thumama Stadium on Nov. 29, 2022, in Doha, Qatar. (Photo by John Dorton/ISI Photos/Getty Images)

For whatever inferiority complexes American soccer fans occasionally harbor, it is not an exaggeration to say Adams would be a contender to be named in a "team of the tournament" if one was to be selected right now.

Berhalter's squad was resolute in emerging from Group B alongside England and has yet to concede a goal from open play.

Spend a little time around this American group, and you start to see the extent of what Adams brings.

He attacks and he defends. He sees the macro and embraces the minutiae. He hypes possibility and he tempers overconfidence. He talks, and he stays silent. Sometimes calm, when order must be held. Sometimes ferocious, when an emotional lift is needed.

Sometimes fair, because he's an honest competitor. Sometimes foul, like when Iran was breaking late in the first half, and he pulled down Ehsan Hajisafi by tugging his shoulder. A yellow card, but a chance for his team to breathe and regroup. He knew what he was doing.

Yet for everything he has offered on the field, perhaps Adams' most composed display came a day before that contest, sat at a dais in Doha's expansive World Cup media center, with an earpiece positioned for translation.

With unavoidable political undertones surrounding the matchup, Iranian journalists peppered Adams and Berhalter with pointed questions about American foreign policy and social issues. One of them rebuked Adams for pronouncing his country incorrectly.

Adams' response was unflustered and measured.

"My apologies on the mispronunciation of your country," Adams said. "One thing I have learned especially from living abroad in the past years … is that in the U.S. we are continuing to make progress every single day."

"Obviously, it takes (time) to understand and through education, I think, is super important," he continued. "Like you just educated me now. I think as long as you see progress, that's the most important thing."

It feels trite to compare such things to the field of play, or does it? It is not a natural association to assume someone able to handle such a thorny subject so smoothly might also be well-positioned to deal with the inherent anxiety of a huge World Cup battle Saturday? We will see.

Game time is approaching, and American fans, as always, are obsessed with Berhalter's formations and selections. The coach himself prefers to nerd out on man-management techniques.

An underrated part of Berhalter's approach is how much time he spends thinking about team unity. Part of his circle includes Sam Walker, author of the highly-regarded 2016 book "The Captain Class: The Hidden Force That Creates The World's Greatest Teams."

Walker now works with teams such as Michigan football and the Super Bowl champion Los Angeles Rams, as well as blue-chip companies and other organizations. Most of them want to know how to build leadership structures that actually work.

Walker met Berhalter at a U.S. Soccer coaching clinic last year. They became friends, and Walker is now a trusted advisor to the head coach.

They don't always agree, but Berhalter counts on Walker's opinion as his own ideas on leadership evolve. Walker has spent time with the squad, conducts Zoom sessions with the team's "leadership group," and was in Qatar through the 0-0 tie with England before returning to his California home.

In his book, Walker outlined key elements to successful captaincy, traits that were shared by the skipper of teams such as a Bill Russell's Boston Celtics, the 1970s Pittsburgh Steelers, the New Zealand All Blacks rugby squad and the 1990s Cuban women's volleyball team that was untouchable for a decade.

"Tyler has most of those elements," Walker told me, via telephone. "He has a relentlessness, a pacing of high effort and toughness. His emotional control and composure are a huge part of what he does.

"He is not afraid to 'carry the water', to do the dirty work, to really grind. His communication style is not all big speeches, it's very one-to-one. He listens as much as he talks. And he can communicate non-verbally, because people pick up on that better."

Walker didn't instantly concur with the method Berhalter chose in allowing his players to pick the World Cup captain but says the coach "wore me down." He made the point that such a democratic way of choosing a leader only works if the culture of your group is strong. The longer this tournament progresses, the more united this USA squad appears.

"Tyler is the perfect captain for this group," Walker added. "He is one of them. It is remarkable to think, he's the same age as (Jacksonville Jaguars quarterback) Trevor Lawrence. He's younger than (current Steelers QB) Kenny Pickett. He's younger than the Michigan punter. This could be an NCAA team by age, and their main leader reflects that."

Christian Pulisic is the best-known U.S. player and has the nickname "Captain America" at Chelsea, but Adams' role and spot on the field are better suited to the captaincy.

He is part of one of the most impressive midfield trios of this tournament, an "MMA" collective where he is flanked by Yunus Musah and Weston McKennie and they've provided enough of a blanket that the Americans have not conceded from open play, and just once in total.

French newspaper L'Equipe, which loves to get analytical about such things and does so forensically, called the trio the secret midfield force of the tournament, bringing an energy that will be needed again Saturday.

Barcelona visionary Frenkie de Jong will martial the center of the field for the Netherlands. Adams especially will have a role in reducing the comfort level of big forward Cody Gakpo, who has scored in each game so far, and fit-again Memphis Depay, an explosive striker also at Barça.

"You're going to have to suffer a lot in these games," Adams said Wednesday. "How you cope with the pressure is obviously stressful. This is a huge opportunity for us. It is going to be an amazing game, I think. The Netherlands could be another favorite to win the World Cup."

Rubbing shoulders with such esteemed company is the latest step in what has been quite a journey. A FOX Sports featured this week by Tom Rinaldi detailed Adams' ride, from a braces-wearing 16-year-old, scoring for the New York Red Bulls against Chelsea, to the German Bundesliga's RB Leipzig, where he reached the Champions League semifinal in 2020.

And then to Leeds, under American coach Jesse Marsch, where the locals love him even more.

If part of what makes Adams work well as captain is character, that's because he came from an upbringing that prioritized that trait above all others.

"My mom worked extremely hard, early mornings, late nights, whatever she could do to earn a little extra money," Adams said of Melissa Russo, who initially raised him as a single mother. Adams describes when he met the man he calls his father, Darryl Sullivan, as the "best day of my life," a change that made him part of a blended family with three new brothers.

"I was very fortunate that I had a role model in my mother," he said. "Whatever I do, I will never be able to repay her for everything she did for me."

Russo joked that as her son's first soccer coach she would watch him "run the entire time and exhaust himself, which was a win-win for everyone."

If that was the impetus behind his rise, here is a new level to the adventure.

For this is it, the moment of moments, the only one that matters until, hopefully, there is another. The Netherlands will be a sizable favorite, but this is not one of those knockout-round games seen as automatic — neither by the Dutch nor the international soccer community.

The Americans have made their mark here and are sticking around as half the competitors, some with far bigger reputations, pack their bags.

It will be a time for breathless anticipation back home and wizened calm on Doha's western edge, where Adams must read and adjust the excitement level of his comrades like a DJ on a mixing board.

This is elimination soccer, where one burst of magic can make dreams come true, and one mistake can evaporate them.

Yet for all the accomplishments of the team to date and all the ways in which the lineup will be compared against the one the Dutch have to offer, there is one factor in which the Americans are a match for anyone.

The USA team didn't want a captain, but it has one. And he's the right one.

Get updates to this story on FOXSports.com.