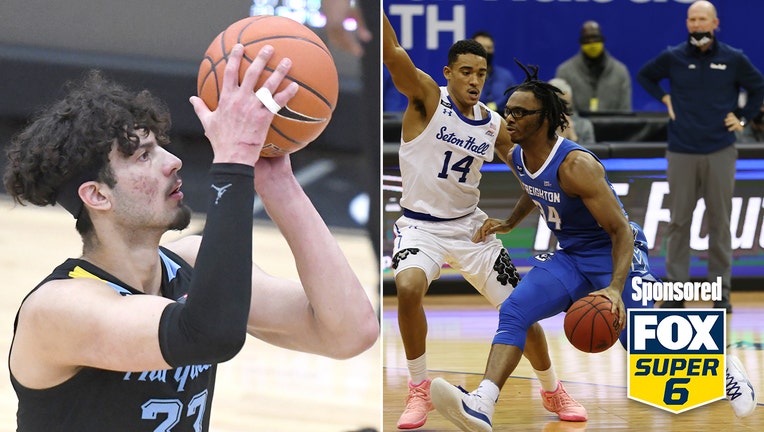 LEFT: Dawson Garcia #33 of the Marquette Golden Eagles takes a foul shot during a college basketball game against the Providence Friars. RIGHT: Denzel Mahoney #34 of the Creighton Bluejays in action against Jared Rhoden #14 of the Seton Hall Pirates. (Mitchell Layton/Rich Schultz/Getty Images)

In this year that feels endless, a meeting back in mid-December feels like it was forever ago.

On Dec. 14, Marquette went into Omaha and stunned Creighton by an 89-84 margin thanks to a stellar performance from D.J. Carton, who scored 20 points and dished off five assists.

Since that night, Creighton has gone 9-3 and rose to No. 15 in the country- a ranking that has them easily in the early projections for the NCAA Tournament. On the other hand, Marquette has gone 4-7 with two postponed games and a daunting five game road trip looming before the Big East tournament.

That’s why Saturday is a must-win game for Marquette when Creighton arrives at Fiserv Forum in Milwaukee (5 p.m. ET, FOX). And that game could win you $1,000 when you play the FOX Super 6 on Saturday’s game. Just download the Super 6 app on your smart phone or tablet, predict the right answers to the six questions on this game and you could win $1,000. It’s that simple and best of all, it’s free.

Who wins: Creighton or Marquette
Creighton has a sense of urgency after losing a home game to Georgetown earlier in the week that puts their Top 25 spot in jeopardy. The problem, however, is Marquette has been so poor since that win in Omaha that they need to make a serious move just to be in tournament consideration.