Chicago - Have you bought the bread and milk yet? A major winter storm is heading our way, and it will probably produce blizzard conditions at times starting late Thursday and during the day on Friday.

There are many components to this storm that will combine to make it very hazardous. I will try to break them down and give a sense of the timing when this travel nightmare will impact us.

We have a natural inclination to fixate on snowfall first with a storm like this. The wind and Arctic cold are just as important to consider but let me start with some forecast snowfall amounts.

Per usual, models have been fluctuating on the amount of flakes that will fly. Earlier in the week some of them were suggesting a foot or two of snow could be coming. The amounts in more recent model runs seem more reasonable. 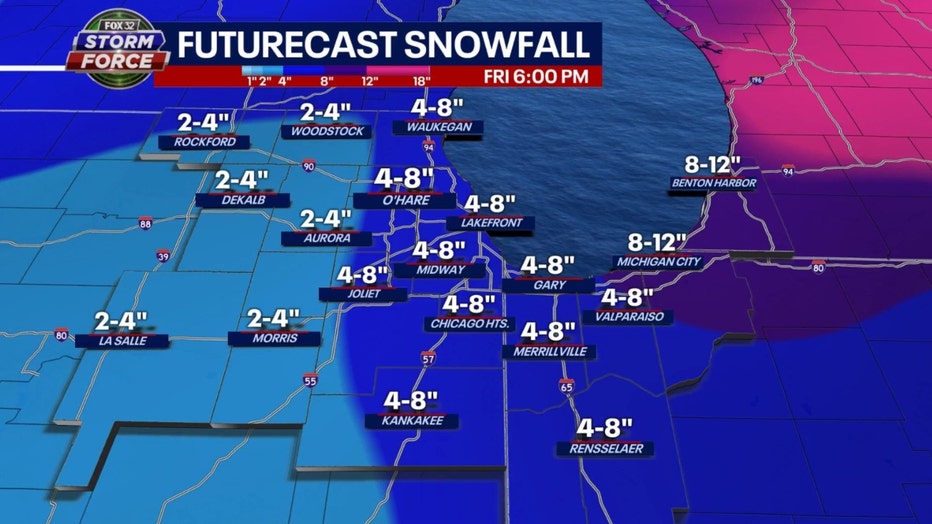 The GFS model (or American model) is squeezing out around 4 to 8 inches for most of us. It lays down about half that amount well west of the city.

The ECMWF (or European model) numbers aren't as robust. It is suggesting about 3 to 4 inches for the area. 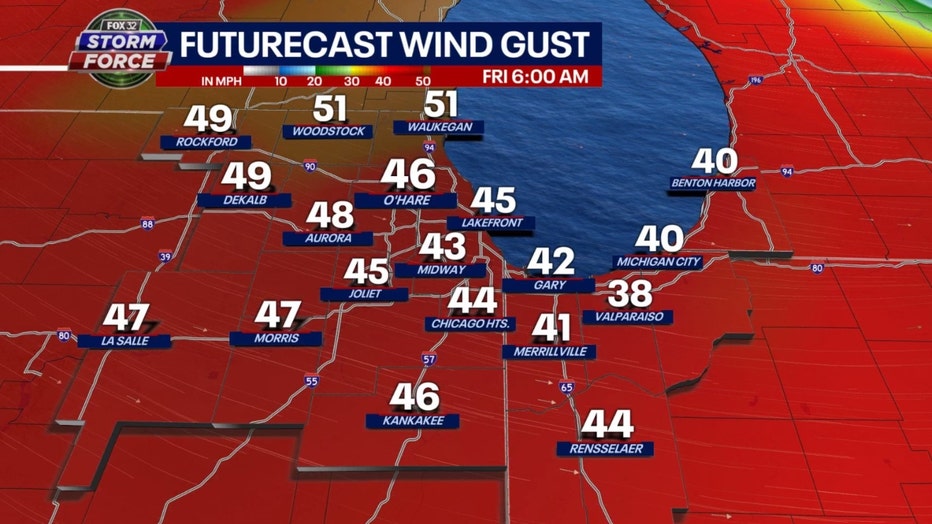 So will this won't be Snowmageddon, but the snow will play a part in making travel tricky at best but more likely very dangerous. The snow will be of the lighter and fluffier variety which will make it easy to be whipped up by the very strong winds that are coming.

Winds will ramp up towards late Thursday afternoon and peak during the first part of Friday. The model above is suggesting gusts between 45 to just over 50 mph. This will reduce visibilities to near zero and bring on blizzard conditions at times. 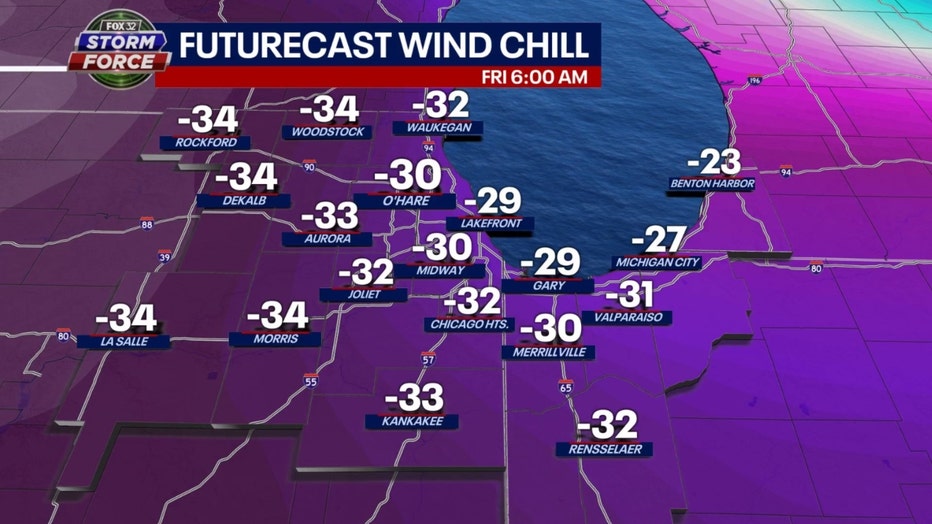 The reason we will see fluffier flakes is the snow will be forming in some frigid air. Arctic high pressure will sweep over the area during the day Thursday and send temperatures tumbling. Wind chills will dip below zero during the afternoon and by Friday morning they will fall to around 30 degrees below zero.

So here is a quick timeline of when these various storm components will come into play:

Snow develops late morning west of the city and then in Chicago around midday. Heaviest snow will fall between the middle of the afternoon through the early morning hours of Friday. Biggest accumulations coming between 2 pm Thursday and 6 am Friday. Snow will taper off by Friday afternoon.

Winds will ramp up by early Thursday afternoon and then peak early Friday morning but remain strong (sustained 25-35 mph with gusts to 50 mph) through much of Friday and then slowly subside Saturday.

Temperature drop sharply Thursday afternoon. We start the day with temperatures near 30 degrees but fall into the single digits by early in the evening. Temps for many of us could dip below zero early Friday morning and then hover near zero during the day Friday. A frigid Friday night with lows near or a bit below zero and then highs climb to near 10 degrees on Saturday.

All these elements combine to make Thursday afternoon through Friday night the worst part of our timeline. Snow and blowing snow in the bitter cold will bring visibilities down to near zero at times. 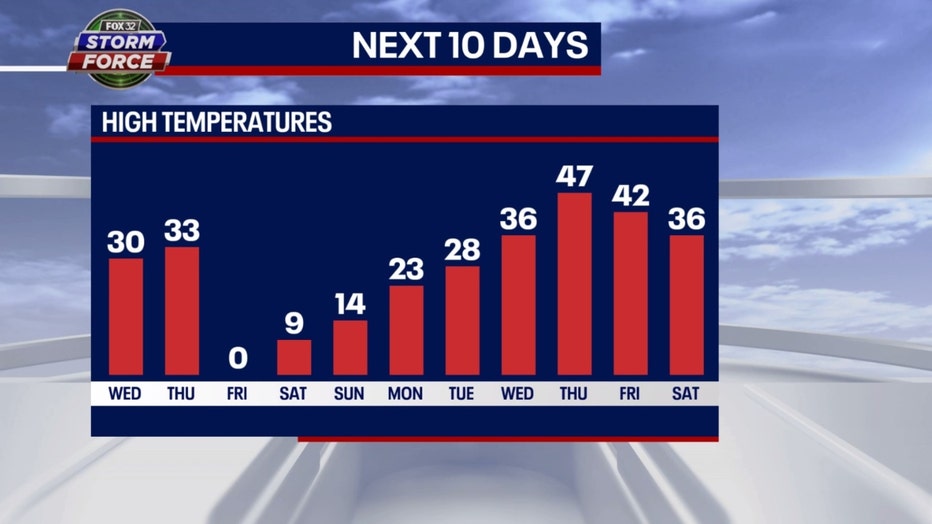 This brutal weather will be brief. We warm up next week quickly. Highs could jump above average by next Wednesday and flirt with 50 possibly by the following Thursday. The long-term forecasts from the Climate Prediction Center suggest this milder pattern might be with us into the start of 2023. 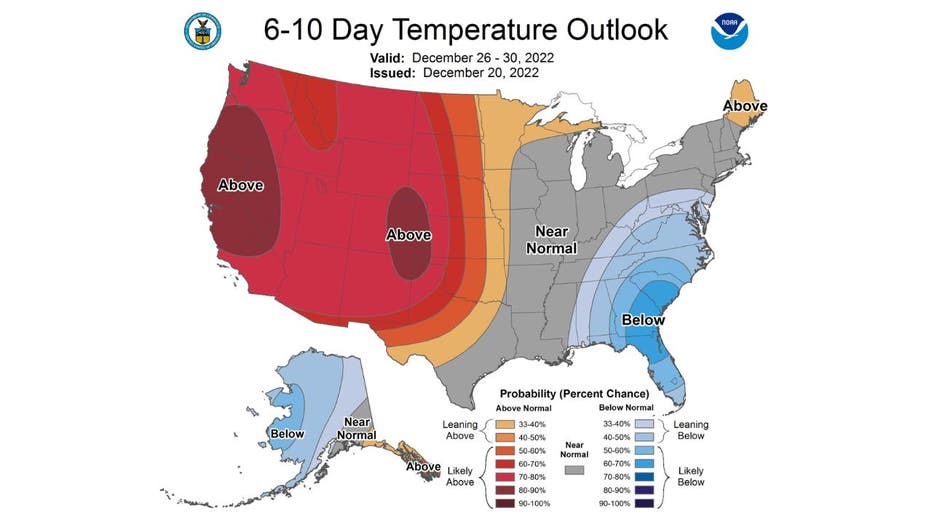 The 6-10 day temperature outlook has us forecast to be near normal overall from Monday through the following Friday. This could be the start of a transition to a very mild pattern for the end of 2022 through the start of 2023. 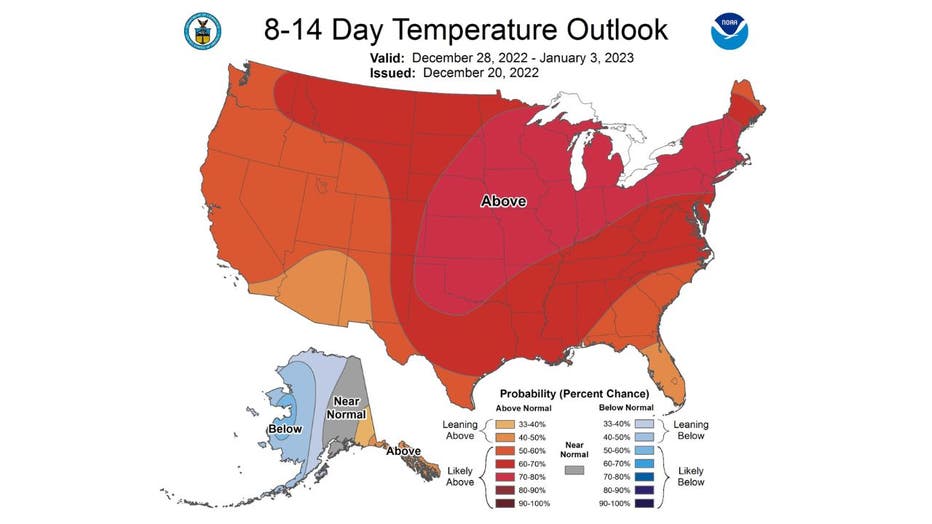 The 8-14 day temperature outlook shows a strong signal for a warmer pattern. It has us "likely above" average overall from next Wednesday through the following Tuesday.

So if you are a snow lover, you will have a few days to enjoy it before it all could melt off quickly by the end of next week.