Chicago - You might not know what they are but growing degree days are on the rise as our world continues to warm. Their increase has impacts for all of us.

Growing degree days (GDD), sometimes called heat units, "are used to estimate the growth and development of certain crops and pests during the growing season". The rates at which plants and insects develop has a lot to do with the amount of heat they are exposed to over a growing season. The way this heat accumulation is measured from planting to harvest is expressed in growing degree days.

In agriculture, the running sum of daily GDD over the growing season, or accumulated GDD, can be used to track crop (and pest) growth stages and predict when they will be ready for harvest. For example, corn typically reaches maturity around 3,000 accumulated GDD.

There are concerns about a jump in GDD beyond agriculture. It changes the timing and length of our pollen seasons which causes allergies and other health effects. It also has an effect on the pollination process of plants and the growth of pests. 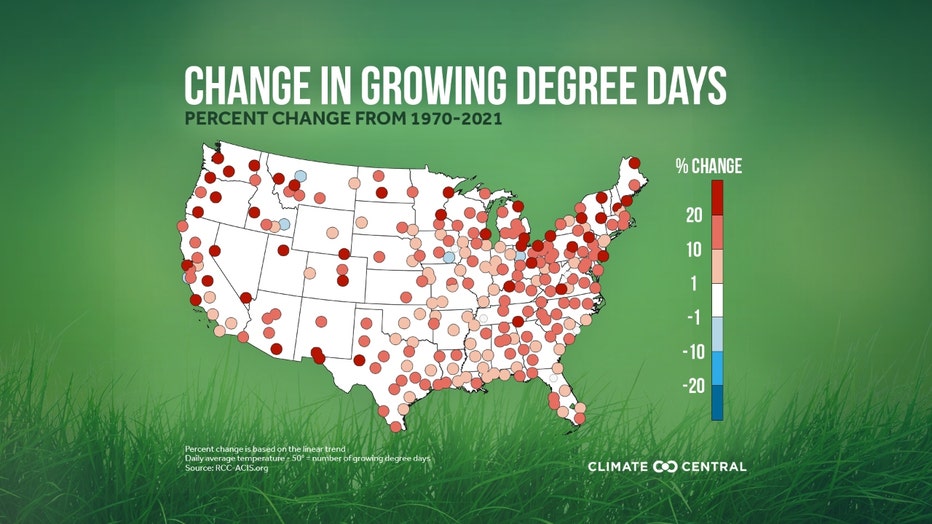 Climate change has meant more growing degree days now compared to fifty years ago. Climate Central studied nearly 250 stations across the country and found that 97% of the locations they analyzed saw an increase in GDD between 1970 and 2021. 25% of the largest increases were located in the west, southwest and southern regions of the U.S. 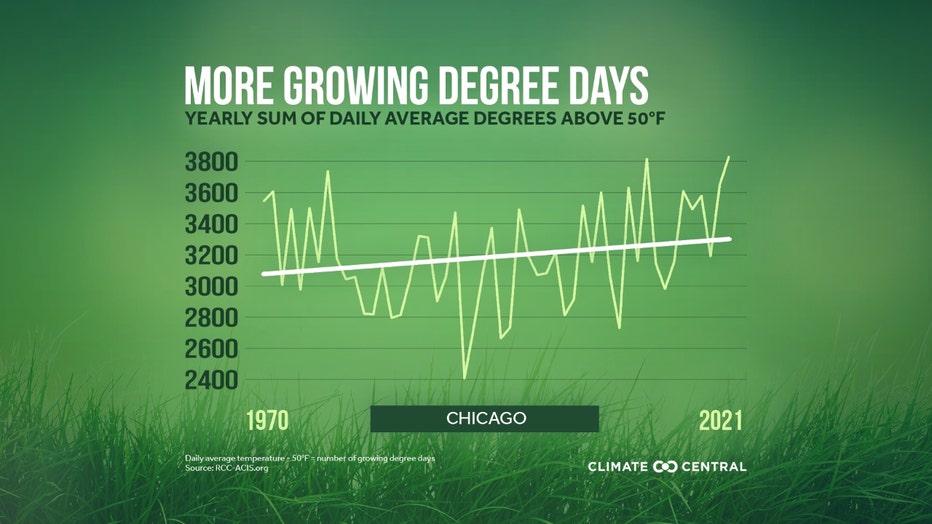 Chicago was no exception. We have seen a significant jump in GDD since 1970.

GDD focuses on temperature, a key factor for plant development. It doesn't consider precipitation and other factors that contribute to process of plant development. While there are plants that can benefit from more GDD, there are many that are negatively impacted. Drought-prone regions of the U.S. like the west and southwest will especially suffer because warmer growing conditions means more evaporation of water from the surface making it more likely for plants to experience water stress.

Climate Central also points out that their analysis does not include a maximum temperature threshold which means it does not account for periods of extreme heat and its impacts on plant growth. More extreme heat can lead to heat stress and a reduction in productivity and yield.

Many of us experience a more tangible impact from the increase in GDD. More growing degree days can lengthen a pollen season and help start it sooner when it comes to grasses, oaks and birch. This is also bad news for those who deadly with hay fever (like me) and asthma. The responses to pollen from the millions of Americans who suffer from these conditions "accounts for tens of billions of dollars in economic losses each year". This will probably get worse with more GDD because of the longer pollen seasons it can cause.