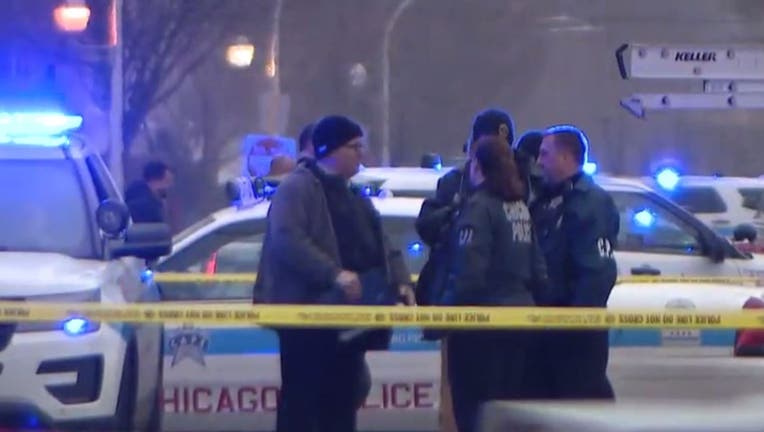 CHICAGO - Six people were shot, one fatally, Wednesday in Chicago, including a man who was killed in front of police in West Garfield Park on the West Side.

An officer was on-duty at 2:26 p.m. in the 4000 block of West Madison Street when he saw someone fatally shoot another person on the sidewalk, interim CPD Supt. Charlie Beck said at a news conference Wednesday outside Stroger Hospital.

The victim, a 26-year-old man, was taken to Stroger Hospital, where he was pronounced dead, according to police. The Cook County medical examiner’s office confirmed the death but did not release the man’s identity Wednesday evening.

The plainclothes officer who witnessed the shooting started to follow the shooter as the man drove off in a pickup truck, Beck said. The suspect realized he was being followed in the 4100 block of West Wilcox, got out of the truck and fired at the officer’s vehicle with a handgun, hitting him in the wrist. He then got back in the truck and drove away.

Responding officers began to take the wounded officer to Stroger Hospital, but on their way spotted the pickup, Beck said. The injured officer told them to follow the suspect instead of continuing to the hospital.

The pickup crashed in the 2000 block of West Congress Parkway and two suspects, a male and a female, were taken into custody, according to police. A weapon was also recovered from the truck.

In non-fatal shootings, a man was shot in an alley in Garfield Park on the West Side.

About 7:20 p.m., the man, 30, was in an alley in the 100 block of North Drake Avenue when someone shot him in the torso, police said. The man was taken to Stroger Hospital where his condition was stabilized.

Two teen boys were wounded after being struck by stray gunfire in Englewood on the South Side.

A 28-year-old man and a female were arguing about 7 p.m. in the 6500 block of South Aberdeen Street, police said. The man pulled out a gun and fired shots at the female.

The shots missed the female but hit two boys who were also on the street, police said. A 13-year-old was hit in the leg, while the other boy, 15, was shot in the buttocks.

Both were taken to Comer Children’s Hospital, where the older boy was listed in good condition and the younger boy was stabilized, police said.

A person of interest was being questioned, police said. Area North detectives are investigating.

Earlier in the evening, a man was wounded in a shooting in Homan Square on the West Side.

He was standing about 6:24 p.m. in the 600 block of South St. Louis Avenue when someone fired shots, police said. The 35-year-old was hit in the abdomen, and taken to Stroger Hospital, where his condition was stabilized.

A man was wounded Wednesday afternoon in a shooting in Austin on the West Side.

Officer responded about 3 p.m. to the first block of North Mayfield Avenue for reports of a person shot, police said.

A witness said the man, 35, was standing in the middle of the street when someone fired shots from a maroon four-door sedan, police said. The man was struck in the knee, and taken to Stroger Hospital. His condition was stabilized.

On Tuesday, six people were shot, two of them fatally, in Chicago.