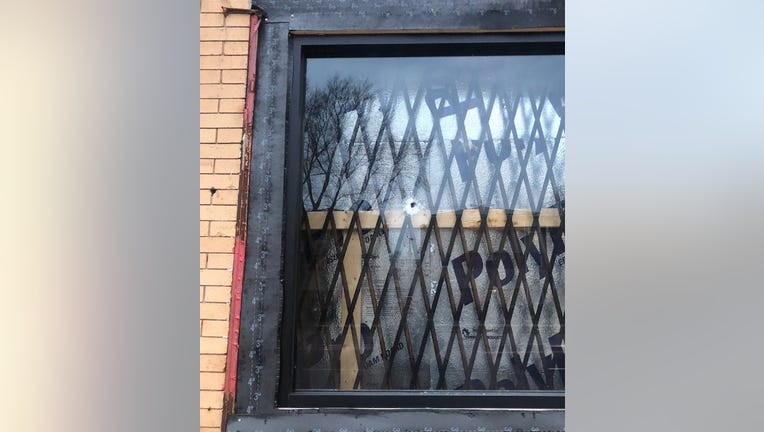 A single bullet hole could be seen in the window of the Get Glammed Beauty Bar, at 8936 S. Cottage Grove., the scene of a shooting Dec. 19. (Sophie Sherry/Sun-Times)

CHICAGO - Six people were killed and at least 32 others wounded in shootings across Chicago this weekend.

The period was twice as deadly as last weekend when 18 people were shot — three of them fatally — between 5 p.m. Friday and 5 a.m. Monday.

The oldest victim this weekend was a 71-year-old grandmother shot dead in Morgan Park on the South Side. Emma Wright was in home about 7:40 p.m. Sunday in the 10800 block of South Morgan Street when two males outside fired shots at the home, authorities said. She was shot multiple times and pronounced dead at Christ Medical Center in Oak Lawn.

Community activist Andrew Holmes said the killing was "devastating to the family and community."

"We should not, and cannot, remain silent about the ongoing violence in the city of Chicago," Holmes said in a statement. "Emma Wright was a grandmother sitting in the comfort of her own home when she became the latest victim of unexplainable shootings in Chicago."

It was unclear if she was the target of the shooting.

Early Saturday, a half dozen people were wounded in a single attack at a South Side party. The victims were holding an after-hours party at Get Glammed Beauty Bar, 8936 S. Cottage Grove, when a person walked in about 12:25 a.m. and started shooting, police said. A woman and five men were wounded — one of them seriously — before the gunman took off, police said. 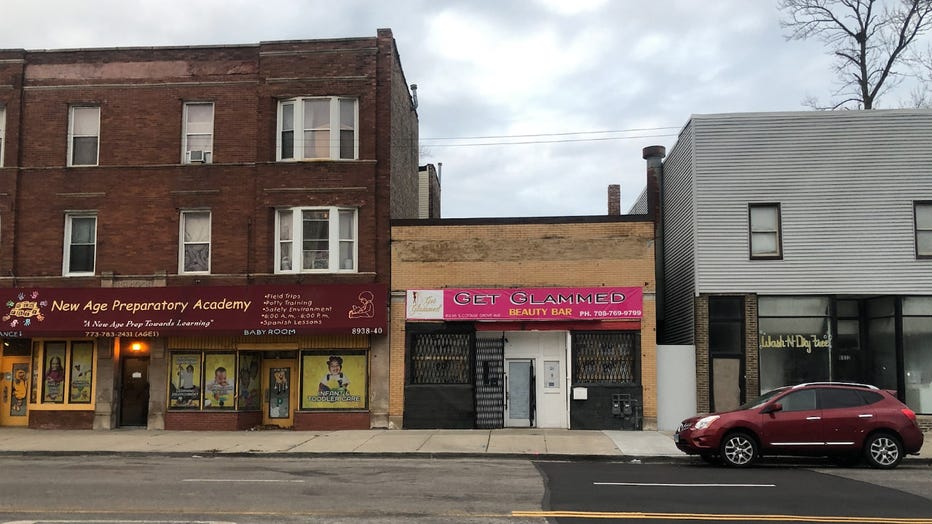 A single bullet hole could be seen in the window of the Get Glammed Beauty Bar, at 8936 S. Cottage Grove., the scene of a shooting Dec. 19. (Sophie Sherry/Sun-Times)

After the shooting, a window at the salon appeared to be damaged by a single bullet hole. No arrest has been made.

In the weekend’s latest fatal attack, a 39-year-old man was killed and another man was wounded early Monday in Humboldt Park on the West Side. The 39-year-old was standing in an alley about 2:55 a.m. in the 2500 block of West Cortez Street when someone fired shots, police said. He was struck in the abdomen and was transported to Stroger Hospital, where he was pronounced dead.

Another man showed up later at St. Mary’s Hospital after being hurt in the same shooting, police said. He was being treated for gunshot wounds to his abdomen and right arm, and was listed in serious condition.

Two hours earlier, a man was shot to death in Back of the Yards on the South Side. Officers responding to a ShotSpotter call found 41-year-old Lyman Bates about 1:10 a.m. in the 5400 block of South Paulina Street, police and the Cook County medical examiner’s office said. He had been shot multiple times in the face and chest, and was pronounced dead on the scene.

Saturday evening, a 19-year-old man was killed in Douglas Park on the West Side. He was in a vehicle about 5:30 p.m. in the 1200 block of South Washtenaw Avenue when a dark-colored vehicle pulled up and someone inside opened fire, police said. The man was shot in the head and neck, and taken to Mount Sinai Hospital, where he was pronounced dead. He was identified as Daron Johnson by the Cook County medical examiner’s office.

About two hours earlier, a man was fatally shot in South Shore. David Green Jr., 23, was on the street about 3:40 p.m. in the 6800 block of South Cornell Avenue when a light-colored car pulled up and someone inside unleashed gunfire, striking him multiple times, police and the medical examiner’s office said. He was taken to the University of Chicago Medical Center, where he was pronounced dead.

Early Saturday morning, a 47-year-old man was fatally shot in Gresham on the South Side. Alex Kinsy was running from a male who was chasing him about 3 a.m. in the 1300 block of West 87th Street when the male fired shots, striking him in the head, police and the medical examiner’s office said. He was taken to Christ Medical Center, where he was pronounced dead.

On Saturday, two people were found fatally shot in a vehicle in Marquette Park on the South Side. A man, 21, and a woman, 19, were found inside the vehicle parked about 1:20 a.m. in a garage in the 3200 block of West 64th Street, police said. Both had suffered fatal gunshot wounds to the head and were pronounced dead on the scene. A police source said a handgun was found inside the vehicle.

Both fatalities are being left off the weekend homicide count pending the release of autopsies, which were scheduled for later Monday.

In nonfatal shootings, three women were injured, two critically, in a shooting early Sunday in Lawndale on the West Side. About 1:35 a.m., they were sitting parked in the 600 block of South Independence Boulevard when someone in a red Jeep Cherokee fired shots into their vehicle, police said.

Saturday evening, a man was critically wounded in a shooting outside a Woodlawn laundromat. He was standing outside of the laundromat about 6:45 p.m. in the 6500 block of South Cottage Grove Avenue when a dark-colored vehicle pulled up and two people got out and fired shots, police said. The 43-year-old was struck in the arm and abdomen, and taken to the University of Chicago Medical Center in critical condition.

A man was in critical condition Sunday after being pistol-whipped during an attempted carjacking in Roseland on the Far South Side. Police initially said he was shot during the carjacking in the 11300 block of South Michigan Avenue, but later clarified the 43-year-old had been pistol-whipped in the back of his head.

At least 21 other people were wounded in shootings across the city over the weekend.