Authorities continued to investigate a mass fatality crash in Imperial County that occurred on the morning of March 2.

HOLTVILLE, Calif. - Officials said 13 people were killed and several others were injured when a Ford Expedition with 25 passengers collided with a semi-truck in Imperial County near the US-Mexico border on the morning of March 2.

Twelve people inside the SUV, including the 28-year-old driver, were pronounced dead at the scene. Another victim died at a local hospital, officials said.

Hours after the crash, ICE confirmed with FOX 11 that federal agents were investigating for possible human smuggling.

A spokesperson with ICE issued the following statement:

"Special Agents from Homeland Security Investigations San Diego responded to the scene of today’s fatal crash in El Centro, California, and have initiated a human smuggling investigation. The investigation is ongoing and no further details are available at this time."

The day after the crash, Border Patrol officials said the SUV entered the U.S. through a hole cut into Southern California’s border fence with Mexico.

The mass casualty crash was reported around 6:15 a.m. Tuesday in the city of Holtville on Highway 115 located 125 miles east of San Diego, according to Battalion Chief Juan Rodelo with the City of Imperial Fire Department.

Watson said the big rig hauling two trailers was traveling northbound and the maroon Expedition was traveling westbound when the truck collided with the left side of the SUV at the intersection of Highway 115 and Norris Road.

It was unclear if the SUV came to a stop at the stop sign on Norris Road, Watson said. He also clarified that the SUV was not being chased by law enforcement.

CHP Commander of Border Division Omar Watson gives an update on the deadly crash that killed more than 13 people near the U.S.-Mexico border.

U.S. Customs and Border Protections were at the scene to assist with translating and lifesaving efforts.

The 69-year-old driver of the big rig was taken to a local hospital with serious injuries. He was later identified as Joe Beltran of El Centro.

Other details of the crash reported by the CHP were grim.

Chief Watson said some victims were ejected onto the pavement, some died inside the SUV, while some who survived were able to pull themselves out. 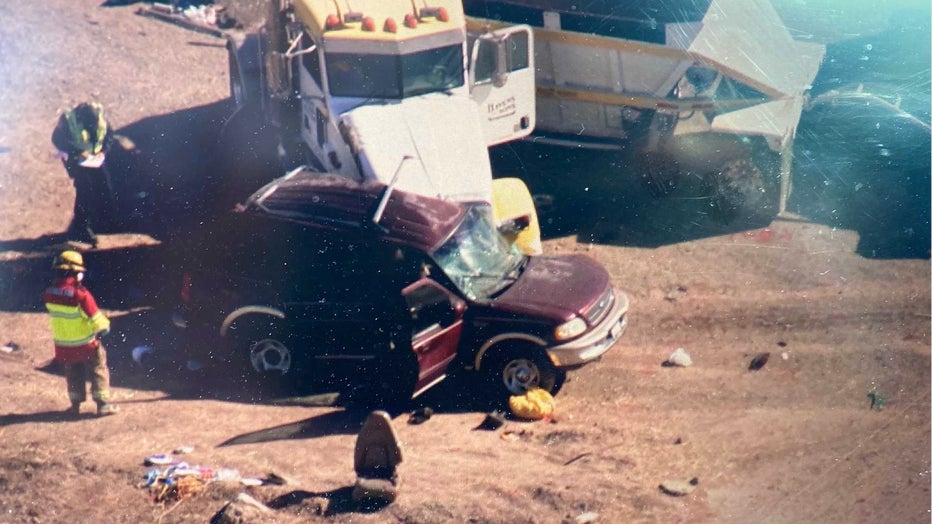 Those who survived suffered minor to severe injuries and are between the ages of 16 and 55 and those who died were in their 20s through 50s.

"Our focus right now is the collision itself," Chief Watson said.

Watson added that the Ford SUV isn’t meant to hold more than 8 people. The investigation also revealed seats were removed from the Expedition.

"It’s unfortunate that that number of people were put in that vehicle because there are not enough safety constraints to keep them safe," Chief Watson said.

The Consulate of Mexico in Mexicali said 10 of the 13 people killed in the crash were Mexican citizens. That information does not necessarily mean that the SUV occupants were undocumented or entered the United States illegally.

Imperial County officials reported multiple fatalities in a mass casualty crash on the morning of March 2.

Two of the three victims taken to Pioneers Medical Center were then transferred to UC San Diego Medical Center due to the severity of their injuries.

Authorities later confirmed the surviving victims were residents of Mexico and Guatemala and were being treated for moderate to serious injuries at Southern California hospitals.