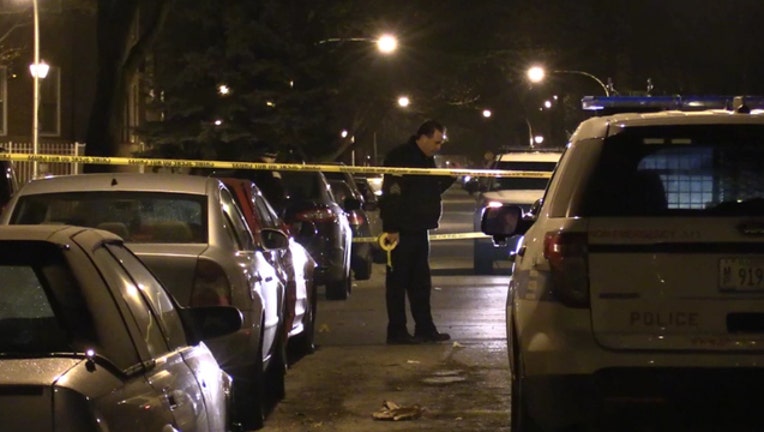 Chicago Police investigate in the 600 block of North Mayfield, where a man was shot in the head early Wednesday. | NVP News

CHICAGO (SUN TIMES MEDIA WIRE) - At least 14 people were shot across Chicago on Wednesday, including six wounded in a mass shooting on the South Side.

Officers responding to a calls of shots fired about 8:15 p.m. found the six gunshot victims inside a restaurant in the 500 block of East 75th Street in Chatham, according to Chicago Police. A bullet grazed a 12-year-old boy’s head, and he was taken in good condition to Comer Children’s Hospital, police and fire officials said.

The latest shooting happened about 10:30 p.m. on the Far South Side, where someone in a passing black car shot a 16-year-old boy in the abdomen in the 400 block of East 133rd Street, police said. He was taken to Christ Medical Center in Oak Lawn in serious condition.

About 9 p.m. at a Chicago Lawn neighborhood bus stop on the Southwest Side, someone walked up to a 21-year-old man in the 6200 block of South Kedzie and shot him in the back, police said. He was taken to Mount Sinai Hospital in serious condition.

About 7:30 p.m., someone robbed an 18-year-old man in Logan Square’s 2800 block of North Troy and shot him in the leg. He was taken to Illinois Masonic Medical Center, where his condition was stabilized, police said.

An hour before that, someone walked up to a 26-year-old man in the 1100 block of East 95th Street in Longwood Manor and shot him in both legs and the chest, police said. He was in serious condition at Christ Medical Center.

At 5:14 p.m., A 20-year-old man was shot in the leg in the 300 block of North Central Avenue in the West Side Austin neighborhood, police said. His condition was stabilized at Stroger Hospital.

Just before 4 p.m., an 18-year-old man was shot in the shoulder in Gage Park’s 2500 block of West 53rd Street. He took himself to Holy Cross Hospital, where his condition was stabilized, police said.

Wednesday morning, someone got out of a gray car in Humboldt Park and shot a 22-year-old man in the leg about 8:45 a.m. in the 900 block of North Monticello, police said. He was in good condition at Mount Sinai.

The day’s first shooting happened just after midnight in Austin. A witness found a 40-year-old man on the ground in the 600 block of North Mayfield with multiple gunshot wounds, and then drove him to Loyola University Medical Center in Maywood, police said. He was in critical condition.

Five people were shot in the city on Tuesday. At least 97 people have been shot in the last seven days.