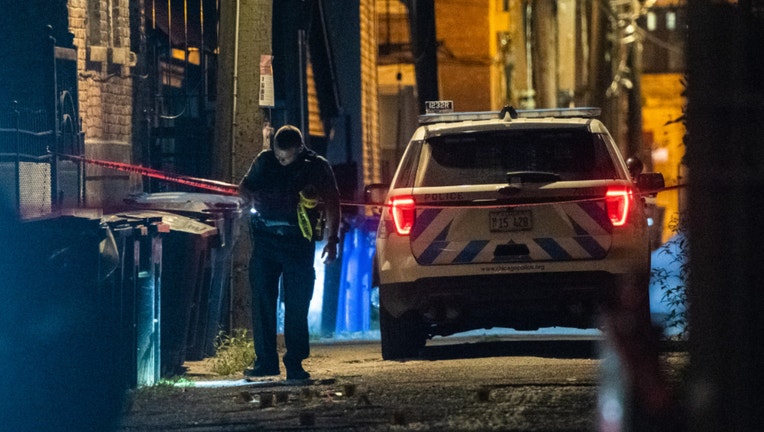 Chicago Police investigate the scene where a man was shot and killed, Tuesday morning, in the 1600 block of South Loomis, in the Pilsen neighborhood. | Tyler LaRiviere/Sun-Times

CHICAGO - Fifteen people were shot — two of them fatally — Tuesday in incidents of gun violence across Chicago, including an 18-year-old man who was gunned down in a Pilsen alleyway.

About 1:25 a.m., officers responded to calls of shots fired in the 1600 block of South Loomis Street and found Eduardo Rendon with multiple gunshot wounds to the neck and chest, Chicago police and the Cook County medical examiner’s office said. Over a dozen shell casings could be observed at the scene of the shooting.

He was taken to the University of Illinois in Chicago Hospital where he was pronounced dead, authorities said. An autopsy released Tuesday found he died from multiple gunshot wounds and ruled his death a homicide.

The day’s first shooting claimed the life of a 27-year-old man in Vittum Park on the Southwest Side.

He was standing on the sidewalk about 12:45 a.m. in the 4700 block of South Cicero Avenue when someone walked up to him and opened fire, police said.

He was struck multiple times in the chest and rushed to Christ Medical Center in Oak Lawn where he was pronounced dead, police said.

An autopsy released Tuesday said he died from his gunshot wounds and ruled his death a homicide, the medical examiner’s office said. His identity has not been released.

In non-fatal incidents, seven people were wounded in less than an hour in a series of shootings across the West Side, including four teenage males shot in West Town. 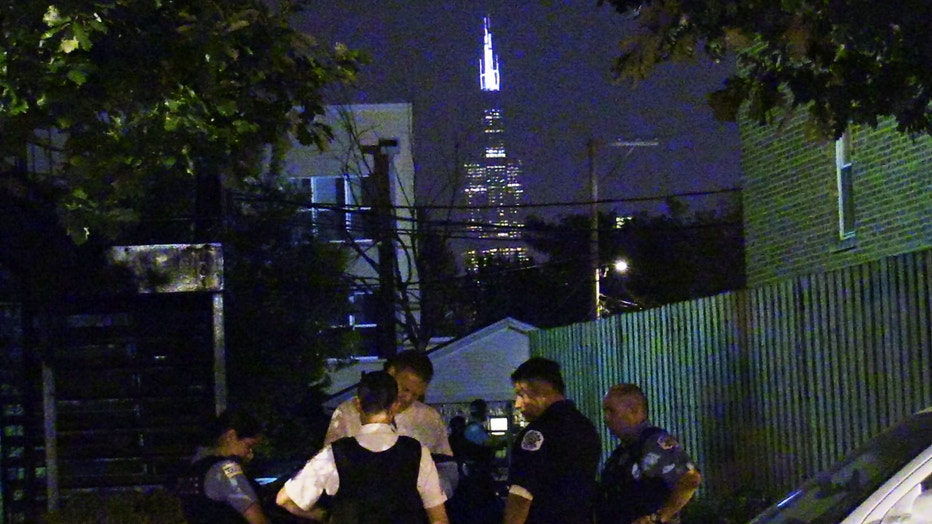 Chicago Police investigate the scene where 4 people were shot , Tuesday evening, in the 2200 block of West Maypole, in the West Town neighborhood. | Jusitn Jackson/Sun-Times

All four have been stabilized and are expected to live, police said. Officers were not given a description of the shooter.

Minutes later, a 16-year-old boy was shot while on his bicycle in Garfield Park on the West Side.

He was sitting on the bike about 9:40 p.m. in the 3500 block of West Huron Street when someone pulled up in a gray SUV and unleashed gunfire, police said.

The teen was struck in the shoulder and ran away as the vehicle drove off, police said. He was taken to Stroger Hospital in serious condition.

About 20 minutes prior, a man and woman were shot in Austin on the West Side.

They were sitting on a front porch about 9:20 p.m. in the 600 block of North Long Avenue when several males approached them on foot and opened fire, police said.

A 69-year-old woman and 36-year-old man were both struck in their legs, police said. Their conditions were stabilized at Stroger Hospital.

Earlier in the day, a woman was critically injured inside an Englewood home when she was hit by stray gunfire in a shooting that also wounded a man outside.

The 21-year-old man was standing on the sidewalk at 12:49 p.m. in front of a house in the 7300 block of South Wolcott Avenue when a white sedan pulled up and two males inside started shooting, according to police.

They were both taken to Christ Medical Center in Oak Lawn, where the woman was in critical condition and the man was stabilized, police said.

The day’s other shooting victims include:

Tuesday’s shootings come after a Monday were two people were killed and five were wounded in gun violence across the city.