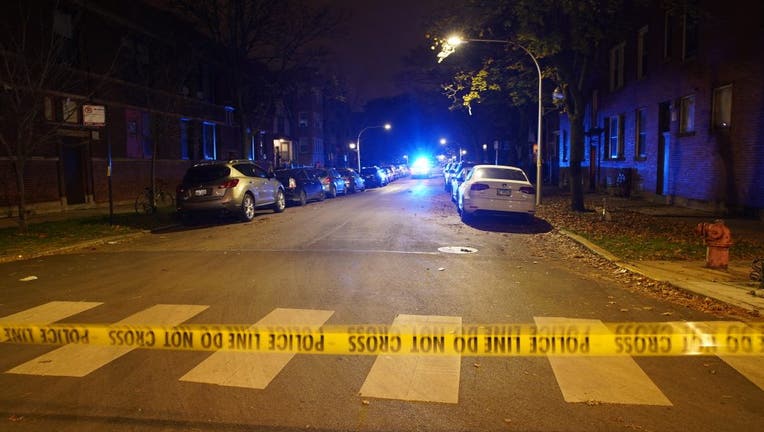 Police investigate the scene where a man was shot in the 4300 block of North Troy Street Nov. 4, 2019. | Carly Behm/Sun-Times

CHICAGO - Four people were killed and 11 others were wounded in gun violence across Chicago this weekend.

A 29-year-old Wisconsin man was fatally shot during a fight Sunday in Roscoe Village on the North Side.

Mario Dingillo was in a physical altercation with a male about 3:20 a.m. in the 2300 block of West School Street, Chicago police and the Cook County medical examiner’s office said. During the fight, a handgun was fired, and Dingillo was shot in the abdomen and arm. He was pronounced dead at Illinois Masonic Medical Center.

Minutes earlier, a 42-year-old man was shot and killed Sunday in Park Manor on the South Side.

Officers responded about 3:05 a.m. to the 600 block of East 75th Street, where they found him on the sidewalk with a gunshot wound to his abdomen, authorities said. The man, who remains unidentified, was taken to the University of Chicago Medical Center in critical condition and died several hours later. Witnesses haven’t told investigators the circumstances of the shooting.

On Saturday afternoon, a 33-year-old man was fatally shot after getting into a fight at a business in Roseland on the South Side.

Eddy N. Vaughns was shot in front of a home about 4:50 p.m. in the 10900 block of South Vernon Avenue, police and the medical examiner’s office said. He had gotten into a “physical altercation” with an unknown person that started at a nearby business earlier. Vaughns, who lived in Roseland, was struck in the chest and taken to University of Chicago Medical Center, where he later died.

Earlier that day, a 27-year-old man died after he was shot while driving in Brainerd on the South Side.

About 2:45 p.m, he was driving south in the 9100 block of South Aberdeen Street when he heard gunshots and was struck in his back and right leg, police and the medical examiner’s office said. He got into a different vehicle and was taken to Little Company of Mary Hospital in Evergreen Park, where he was pronounced dead. He has not yet been identified.

The most recent nonfatal shooting left a man injured Monday in Albany Park on the Northwest Side.

The 43-year-old man showed up at Swedish Covenant and told investigators he was shot in the hand about 4:20 a.m. in the 4900 block of North Kimball Avenue, according to preliminary information from Chicago police. He was listed in good condition.

Another man was shot less than two hours earlier a few blocks away in the same neighborhood.

The 35-year-old was in his vehicle about 2:52 a.m. in the 4300 block of North Troy Street when someone approached him and fired shots, police said. He was hit in the back, and was able to run to Montrose Avenue, where a bystander flagged down officers. He was taken to Illinois Masonic Medical Center, where his condition was stabilized.

Police tape blocked off the Templestowe Pub, 3135 W. Montrose, and blood could be seen on the sidewalk near the entrance. A dark-colored vehicle in the middle of the street on Troy had two bullet holes in its windshield along with shell casings nearby.

On Sunday afternoon, a 13-year-old girl was shot in Lawndale on the West Side.

About 3:30 p.m., she was on a sidewalk in the 1600 block of South Homan Avenue when two people got out of a burgundy-colored SUV and opened fire, police said. She was struck twice in the abdomen and rushed to Stroger Hospital, where she was stabilized.

Late Saturday night, a teen was wounded in Roseland on the Far South Side.

The 15-year-old boy was walking in an alley at 11:14 p.m. in the 11100 block of South Emerald Avenue when a male wearing all black approached him from the gangway and fired shots, police said. He was hit in the leg, and his condition was stabilized at Christ Medical Center in Oak Lawn.

The weekend’s first reported shooting wounded a 31-year-old man in Cragin on the Northwest Side early Saturday.

He was standing in the hallway of an apartment building about 12:24 a.m. in the 5400 block of West Parker Avenue when a male approached him and fired shots, police said. He was shot three times in the leg, and his condition was stabilized at Illinois Masonic Medical Center, police said.

Six other people were injured in shootings across the city between 5 p.m. Friday and 5 a.m. Monday.

Last weekend, four people were shot and 20 others were wounded in Chicago gun violence.