CHICAGO - At least two people were killed and 14 others wounded in Independence Day gun violence across Chicago.

A single shooting killed one man and wounded three others in Humboldt Park on the West Side.

They were standing outside about 11:30 a.m. near Iowa Street and Homan Avenue when a someone inside a car drove by and fired shots, Chicago police said.

A 32-year-old man was killed, police said. His name has not been released. Two other men and a teenage boy were treated for gunshot wounds.

Officers tried to chase a white sedan involved in the shooting but lost sight of it, police said. Police personnel tracked the car on city cameras and found it — but no suspects — by the early afternoon, CPD Supt. Eddie Johnson told reporters a few hours later.

The shooting was the largest so far during the holiday weekend and came less than 24 hours after three men were hurt in another shooting just a half mile away.

At the time Johnson spoke, seven people had been shot — two fatally — in that time span. Asked to compare that total to previous years’ Independence Day violence, Johnson said he wouldn’t comment because he didn’t want to “jinx” the rest of the weekend.

“You know what, I think right now you’ll never hear me say we’re satisfied with anything,” Johnson said. “But let’s see how the rest of the weekend plays out. And I say that because I don’t want to — I’m not superstitious — but I just don’t want to jinx anything.”

About 4 p.m., right as Johnson stepped to a podium to speak with reporters, a woman was struck by stray gunfire in a shooting that wounded another person in South Shore.

People were arguing on a sidewalk about 4 p.m. in the 2800 block of East 77th Street when someone in the group took out a gun and fired shots, police said.

The man was struck in the back and taken in serious condition to the University of Chicago Medical Center, police said. A woman walking on a sidewalk and struck by gunfire in both legs was seriously wounded, police said. She was not involved in the argument.

The shooter fled northbound on South Shore Drive, police said. No arrests have been made.

In other Fourth of July gun violence:

At least six others were hurt in shootings within city limits on July Fourth.

Additionally, at Navy Pier, three people were stabbed, and more than a dozen others were trampled after a fireworks display.

A year ago, seven people were wounded in Chicago gun violence on the Fourth of July. 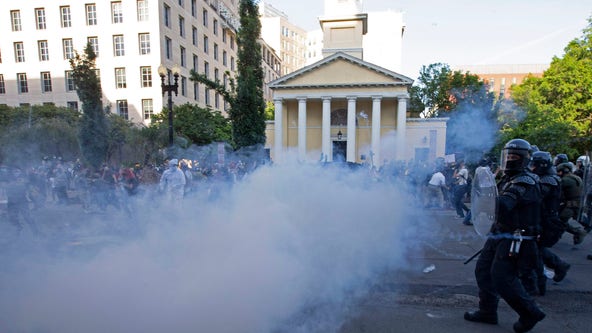