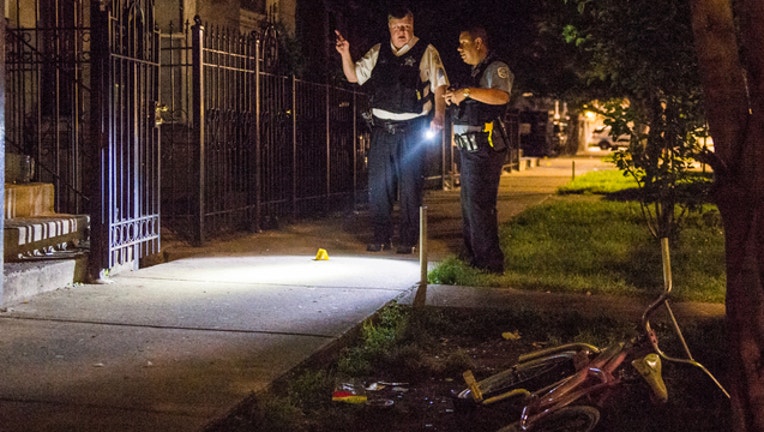 CHICAGO (SUN TIMES MEDIA WIRE) - At least 18 people were shot, two of them fatally, Sunday in gun violence across Chicago in a 24-hour period.

The wounded included a 17-year-old boy walking to the Red Line, four people in a single shooting in Little Village and a man walking near Grant Park downtown.

The last homicide happened in the Marquette Park neighborhood on the Southwest Side. About 9:20 p.m., a 26-year-old man was standing on the sidewalk in the 6500 block of South Maplewood when a male walked up and fired shots, Chicago Police said.

The man was shot in the head and was taken to Holy Cross Hospital, where he was pronounced dead, police said. The Cook County Medical Examiner’s Office hasn’t released details about the death.

The second homicide claimed the life of 19-year-old Kenneth L. Hill.  He was shot to death Sunday morning in the South Side Englewood neighborhood. Hill was standing on the sidewalk about 6:15 a.m. when someone shot him in the head in the 5800 block of South Peoria Street in Englewood, according to authorities. Hill was taken to University of Chicago Medical Center, where he died. He lived on the same block as the shooting.

In the latest nonfatal shooting Sunday, a 16-year-old boy was wounded in the Lawndale neighborhood on the West Side. The boy was standing in a vacant lot about 11:50 p.m. in the 800 block of South California Avenue, police said. Someone walked up and fired shots, grazing the boy in his left leg. He was taken to Stroger Hospital, where his condition stabilized.

About 11 p.m., a 41-year-old man was shot in the Humboldt Park neighborhood on the West Side. The man was standing on a sidewalk with a group of people in the 1000 block of North Drake Avenue, police said. Someone walked up and fired shots in their direction. The man was shot in his right shoulder and was taken to Stroger Hospital. His condition had stabilized.

Four people were wounded in a shooting in the Little Village neighborhood on the South Side. The group was standing on the street when a male walked up and fired shots at 9:27 p.m. in the 2200 block of South Sacramento, according to police.