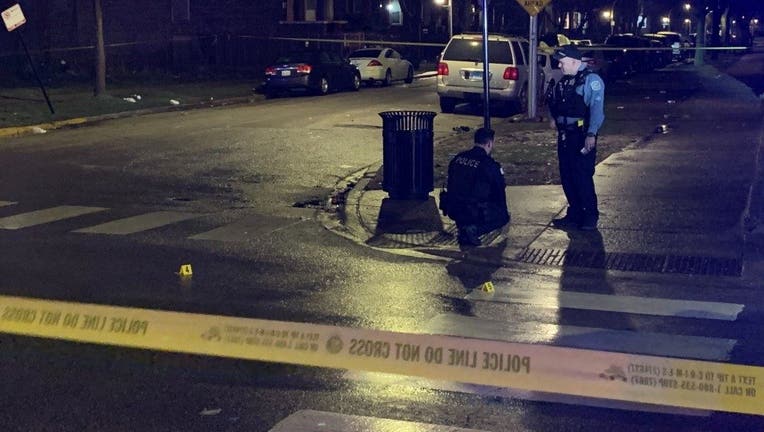 CHICAGO - Twenty people were shot across Chicago over the weekend, including two teenagers who were fatally wounded.

A 16-year-old boy was killed Saturday in West Town.

Someone in a passing silver BMW fired shots about 11 a.m., striking Darius Lane, Chicago police and the Cook County medical examiner’s office said. He was rushed to Stroger Hospital, where he was pronounced dead.

On Friday night, a 19-year-old man was fatally shot during an attempted robbery in Gresham on the South Side.

A male suspect approached Xavier S. Pointer just before 10 p.m. in the 8500 block of South Carpenter Street, authorities said. The suspect announced a robbery and shot Pointer in the chest when he said he didn’t have anything. The shooter ran off, and Pointer was taken to Christ Medical Center in Oak Lawn, where he was pronounced dead.

In nonfatal shootings, a 16-year-old girl was injured when someone fired a gun outside a West Rogers Park apartment on the North Side.

She was in the apartment about 11:35 p.m. when she heard two women outside arguing, police said. Someone fired a gun during the argument and a bullet flew through the door and hit the girl in the arm. The teen was taken to Saint Francis Hospital in Evanston in good condition. The women were last seen entering a black Chevrolet Malibu.

The most recent nonfatal attack left two women injured early Monday in Albany Park on the Northwest Side.

They were arguing with another woman about 2:15 a.m. in an alley in the 3500 block of West Montrose Avenue when someone fired shots from a passing black vehicle, according to police. One woman, 25, was hit in the pelvis, groin, leg and backside and taken to Illinois Masonic Medical Center in fair condition. A 22-year-old was grazed on her shoulder and taken to the same hospital in good condition.

Officers stopped a vehicle near the scene and several people inside were taken in for questioning by Area North detectives, police said.

On Sunday afternoon, two concealed-carry license holders shot a man who fired at them in Scottsdale on the South Side.

The 47-year-old man opened fire at a southbound vehicle about 5:20 p.m. in the 7900 block of South Knox Avenue, police said. Two men inside the vehicle, 21 and 29, returned shots, striking the older man in the abdomen, side and leg. He was taken to Christ Medical Center in Oak Lawn in critical condition.

Neither of the men in the vehicle was hurt, according to police. They both had valid FOID cards and concealed-carry licenses.

Minutes before, a man was shot during an attempted robbery in Austin on the West Side.

The 21-year-old was outside about 5:15 p.m. when another male approached him in the 400 block of South Lockwood Avenue, pointed a gun at him and tried to rob him, police said. After a struggle, the robber shot the man in the thigh. He was taken to Stroger Hospital in good condition.

Early Sunday morning, a man was shot and robbed in Gage Park on the Southwest Side.

The 26-year-old was walking at 12:35 a.m. when two males approached and one put a gun to his chest in the 5700 block of South Sawyer Avenue, according to police. The other suspect took the chain off the man’s neck before the gunman shot him in the hand and leg and the robbers ran away. A relative drove the man to Holy Cross Hospital and he was later transferred to Mount Sinai Hospital in good condition.

Saturday night, two people were wounded in Garfield Park on the West Side.

The 29-year-old man and 18-year-old woman were standing on the corner with a group of people about 9:30 p.m. in the 3900 block of West Van Buren Street when they heard gunshots and realized they’d been hit, according to police. The man was hit several times in the foot while the woman was hit once in the leg. They were both taken to Stroger Hospital in good condition.

In the morning, a 53-year-old woman was grazed by a bullet on the South Side.

About 11:20 a.m. she was in the 10500 block of South Avenue J, when she was grazed in the head, police said. She was taken to University of Chicago Medical Center in good condition.

Less than an hour before, a 27-year-old man was shot during a fight in Humboldt Park on the Northwest Side.

About 10 a.m. officers responding to calls of shots fired in the 4100 block of West Kamerling Avenue, found the man with a gunshot wound, police said. Investigators later learned he got into a fight with someone who pulled out a gun and shot him in the shoulder. He was taken to Mount Sinai Hospital for treatment in good condition.

The weekend’s first shooting injured a 19-year-old woman Friday night in the Back of the Yards on the South Side.

She was riding in a vehicle about 8:07 p.m. in the 5200 block of South Laflin Street when she heard gunfire and felt pain, police said. The woman was struck in the head and was driven to St. Bernard Hospital, where she was listed in fair condition.

Seven other people were wounded in shootings between 5 p.m. Friday and 5 a.m. Monday.

Last weekend’s gun violence saw one person killed and 17 others hurt throughout the city.