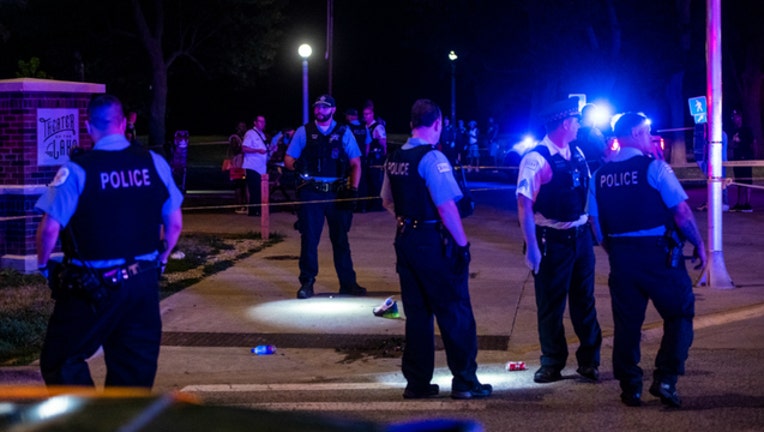 CHICAGO (SUN TIMES MEDIA WIRE) - At least 43 people were wounded — two of them fatally — in gun violence incidents within city limits over the weekend.

The weekend’s latest fatal shooting happened Friday in Englewood on the South Side.

About 11:51 p.m., Reginald Watkins, 23, was was sitting in a vehicle in the 6200 block of South Laflin Street, Chicago police and the Cook County medical examiner’s office said. He got into an argument with a group of people across the street and gunfire rang out.

Watkins was hit in the chest and ran to the corner of 62nd and Laflin where he collapsed, authorities said. He was taken to the University of Chicago Medical Center where he later died.

Earlier, another man was fatally wounded in a drive-by a few miles south in Fernwood.

He was in a vehicle about 7:20 p.m. in the 200 block of West 105th Place when a silver-colored vehicle drove past and someone inside opened fire, police said.

The man, 21, was hit multiple times on his body, police said. He took himself to Roseland Community Hospital where he was pronounced dead.

In non-fatal gun violence, seven people were hurt in a shootout Saturday near Fullerton beach in Lincoln Park on the North Side.

About 3:20 a.m., a group of people walking towards the lakefront in the first block of West Fullerton Parkway got into an argument with a group that was leaving, police said.

People from both groups pulled out guns and opened fire after the argument escalated, police said.

Three women — 28, 27 and 24 years old — were taken to local hospitals with gunshot wounds to the leg, arm and shoulder, respectively, police said. Two men, 28 and 25, were both shot in the leg and taken to Northwestern Memorial Hospital.

Those five people were in good condition, police said.

On Sunday, a 12-year-old girl was hurt in a shooting in Avondale on the Northwest Side.

About 2:24 a.m., she was in a vehicle driven by her father traveling in the 3200 block of North Kimball Avenue, Chicago police said. A man in a gold-colored sedan fired shots, hitting the girl in the leg.

Her father drove her to Swedish Covenant Hospital where she is in good condition, police said.

Minutes before the shooting, the girl’s father was involved in a verbal altercation with the gunman at a retail establishment, police said.

Another girl was shot Friday in Lawndale on the Southwest Side.

The 14-year-old was standing on a sidewalk with a group in the 3700 block of West Douglas Boulevard when a dark-vehicle pulled up and someone inside opened fire, Chicago police said.

She was hit in the foot and arm about 9:45 p.m., police said. Her condition was stabilized at Stroger Hospital.

She did not appear to be the target of the shooting, a police source said.

A 51-year-old man was arguing with a male acquaintance about 5:07 p.m. on a sidewalk in the 700 block of North Lorel Avenue, police said. As the man got into his vehicle to drive away, the acquaintance pulled out a handgun and opened fire.

The man was hit in the foot and drove himself to Stroger Hospital, police said. His condition was stabilized.

At least 31 others were hurt in gun violence incidents from 5 p.m. Friday to 5 a.m. Monday across Chicago.