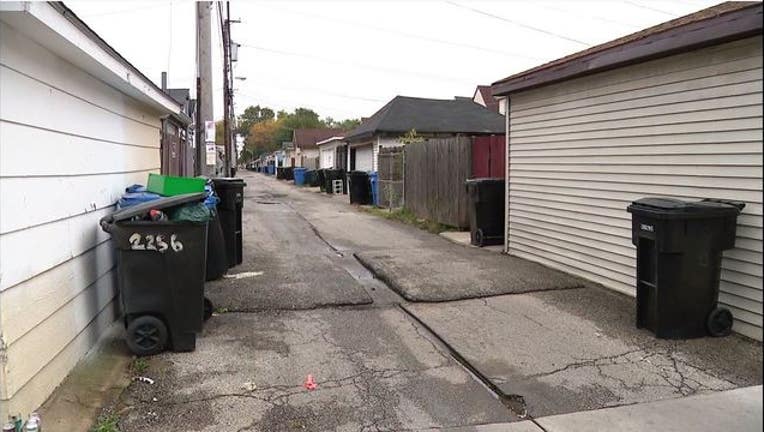 Julien Gonzalez, 2, was shot dead in this alley in Chicago.

CHICAGO (SUN TIMES MEDIA WIRE) - Five people were killed and at least 15 others were wounded in citywide shootings over the weekend, including a toddler who was shot to death in the Hermosa neighborhood on the Northwest Side.

At 10:17 p.m. Saturday, someone unleashed gunfire on the 2-year-old boy and an 18-year-old man, killing the child and marking the neighborhood’s first homicide of the year, according to Chicago police.

The toddler, Julien Gonzalez, was standing with the man at the mouth of an alley in the 2200 block of North Kilbourn when a hail of bullets came from the street’s end, police and the Cook County medical examiner’s office said. Two females had been fighting in the alley between Kilbourn and Kenneth avenues when the shots rang out in their direction.

The bullets struck Gonzalez in the neck, authorities said. He was taken to Stroger Hospital and pronounced dead a short time later.

The man was shot in his leg and taken to Illinois Masonic Medical Center, where his condition was stabilized, police said.

Almost 3 hours earlier, an 18-year-old man was killed and two other people were wounded during a party in the Riverdale neighborhood on the Far South Side.

About 7:35 p.m., the trio was at the outdoor gathering in the 13200 block of South Prairie Avenue when gunfire erupted, police said. Witnesses told investigators that a male and female pulled out guns during an altercation and opened fire on the group.

James Garrett and a 48-year-old man were struck in their bodies and taken to Christ Medical Center in Oak Lawn, where Garrett died less than an hour later and the older man’s condition was stabilized, authorities said. Garrett lived in the Garfield Ridge neighborhood on the Southwest Side.

A 20-year-old woman was shot in the arm and taken to University of Chicago Medical Center, where she was stabilized, police said.

On Sunday morning, a 36-year-old man was found shot to death in the Grand Crossing neighborhood on the South Side.

He was pronounced dead at the scene. He had not yet been identified, authorities said.

Less than an hour later, a home invader was shot with his own gun in the Hollywood Park neighborhood on the Northwest Side.

At 10:34 a.m., the unidentified man was shot multiple times during a struggle at a home in the 5700 block of North Spaulding, authorities said. He was pronounced dead at the scene.

A 43-year-old man who was involved in the struggle was taken to Swedish Covenant Hospital with injuries that weren’t thought to be life-threatening, police said.

The last reported shooting death of the weekend happened early Monday in the Pullman neighborhood on the Far South Side.

About 2:50 a.m., officers responded to a ShotSpotter alert and found three men shot inside a vehicle in the 600 block of East 115th Street, police said.

Darnell Banks, 30, was taken to University of Chicago with gunshot wounds to his abdomen and back, authorities said. Banks, who lived in downstate Urbana, was pronounced dead just over 3 hours later.

A 32-year-old man was shot in the abdomen and both legs and was taken to Christ Medical Center, police said. He was initially listed in serious condition, but has since been upgraded to good condition.

Neither of the men was able to give investigators any details about the shootings because of their conditions, police said.

A 29-year-old man who was shot in the leg was also taken to University of Chicago, where he was treated and released, police said. He was not cooperating with detectives and failed to provide information about the circumstances of the shooting.

At least 10 other people were wounded in weekend shootings across Chicago.

Last weekend, six people were killed and 15 others wounded in shootings between Friday evening and Monday morning.