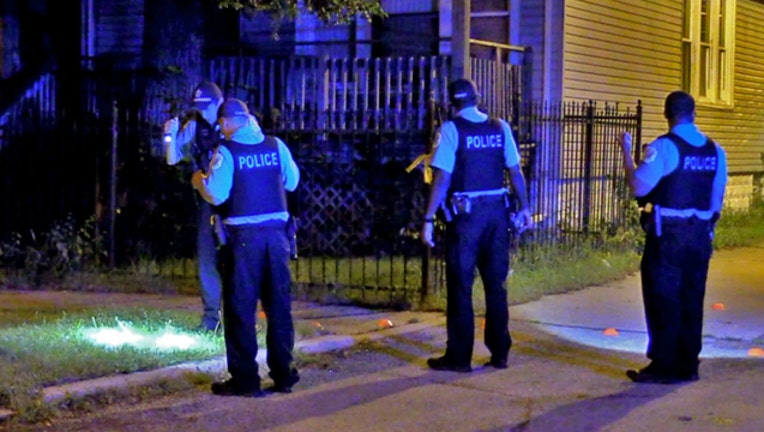 CHICAGO (Sun-Times Media Wire) - Five people were killed and 16 others were wounded in gun violence Saturday across Chicago, including seven people caught in a mass shooting on the West Side.

Over half of the victims suffered gunshots in a series of three fatal shootings over a period of about 30 minutes near the end of the day.

About 9:40 p.m., seven men were gathered at a park bench in the 3100 block of West Fulton when four people approached them and opened fire, Chicago Police said.

Tavish Harris, 30, of Berwyn, was shot in the head and pronounced at Stroger Hospital, according to police and the Cook County Medical Examiner’s Office. Kevontay Montgomery, 22, of Maywood, was also taken to Stroger, where he was pronounced dead at 8:28 p.m. on Sunday. Five other men, ranging from 26 to 47 years old, were shot and taken by paramedics to hospitals in various conditions.

Another man was killed in a shooting in the Rosemoor neighborhood on the Far South Side. About 10:15 p.m., two men were standing on the sidewalk in the 200 block of East 106th Street when several males fired shots from an alley, according to police.

Quentaun G. McClinton, 26, was shot multiple times in the body and was taken to Christ Medical Center in Oak Lawn, where he died, authorities said. He lived on the same block where he was shot. Another 26-year-old was treated for gunshot wounds his hand and back.

Another fatal shooting Saturday left a man dead in the Lawndale neighborhood on the West Side. About 9:45 p.m., officers found 22-year-old Ray Johnson Jr. unresponsive on a sidewalk with multiple gunshot wounds to his upper body, police and the medical examiner’s office said. He was taken from the 1300 block of South Avers to Mount Sinai Hospital, where he was pronounced dead. He lived in the same neighborhood.

The earliest fatal shooting killed 29-year-old Ryan Hatchett in the Humboldt Park neighborhood. About 7:40 a.m., Hatchett was shot during a domestic-related incident in the 1100 block of North Central Park Avenue, according to authorities. He was shot in the abdomen and died two days later at Stroger Hospital.

The last nonfatal shooting wounded two people in the Austin neighborhood on the West Side. A man and women were walking when a dark-colored car pulled up and someone inside fired shots at 5:17 p.m. in the 200 block of South Lavergne, according to police. The 23-year-old man and 21-year-old woman were both taken to Mount Sinai Hospital, where their conditions stabilized.

Minutes earlier, a man was wounded in a shooting in the Bronzeville neighborhood on the South Side. The 22-year-old was suffered multiple gunshot wounds to the back about 5 p.m. in the 1600 block of South Indiana Avenue, according to police.

In other shootings during the 24-hour period Saturday:

Two men were shot while standing on the sidewalk about 11 a.m. in the Austin neighborhood on the West Side. The men, ages 27 and 23, were shot in their lower bodies.

About 9:40 a.m, an intoxicated man was wounded in a shooting in the Wicker Park neighborhood on the West Side. The 23-year-old couldn’t recall where the shooting occurred.

A 23-year-old man was shot in his back about 6:15 a.m. in the Gage Park neighborhood on the Southwest Side.

About 4 a.m., a 25-year-old man was walking in the Rosemoor neighborhood when someone in a passing car fired shots and struck him in the leg.

About 12:30 a.m., a man was about to enter a vehicle in the Gresham neighborhood when he was shot in the hip and lower back.

In the first shooting Saturday, a 22-year-old man was shot in his neck and body in the West Garfield Park neighborhood on the West Side.