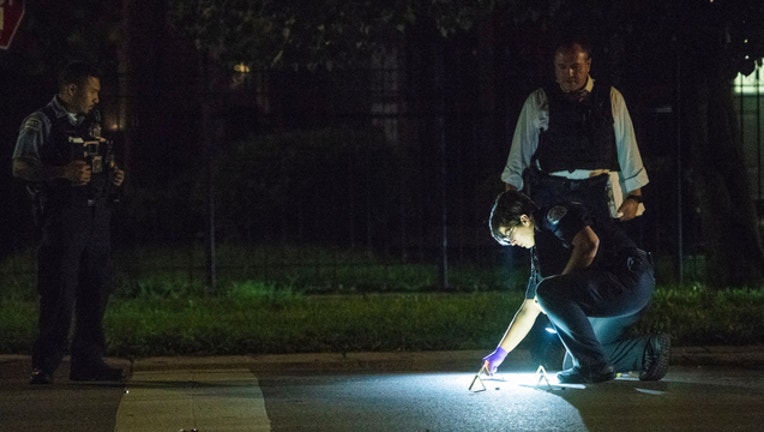 Police investigate a shooting about 11 p.m. Monday in the 7200 block of South Bennett | Tyler LaRiviere/Sun-Times

CHICAGO (SUN TIMES MEDIA WIRE) - Four people were killed and 23 others were wounded in shootings across Chicago over the Labor Day holiday weekend.

The weekend saw a drop in shootings from Labor Day weekend last year, during which 42 people were shot across the city, seven of them fatally.

The most violent period was early Saturday, when several shootings ripped through the West Side Austin neighborhood.

One woman was shot dead after a gunman approached a group of people in an alley and opened fire. Deanna Marie Caudillo, 30, was struck in the back of her head and pronounced dead at the scene, according to Chicago police and the Cook County medical examiner’s office.

No one was in custody that morning, and police were unsure if she was the target of the shooting.

The second homicide happened 20 minutes earlier in the same neighborhood.

Two men were standing in a group about 3:50 a.m. in the 5100 block of West Maypole Avenue when a masked gunman walked up and opened fire, according to police. Roley Johnson III, 32, was shot in his neck and was taken to Stroger Hospital, where he was pronounced dead, authorities said. He lived in the Little Village neighborhood. Another man was treated for a gunshot wound to his wrist, according to police.

On Sunday night, incoming Northwestern University doctoral student Shane Colombo, 25, was shot when two other people started shooting at each other, according to police and the medical examiner’s office. Colombo was caught in the crossfire, and one of the stray bullets pierced his abdomen. He was rushed to Saint Francis Hospital in Evanston, where he was pronounced dead less than an hour later.

A shooting Monday night left three people wounded in the South Shore neighborhood on the South Side.

The group was sitting outside on the hood of a vehicle at 10:58 p.m. in the 7200 block of South Bennett when a vehicle drove by and someone inside fired shots, police said. A 19-year-old man was shot in the head and was taken to the University of Chicago Medical Center where he was in critical condition. An 18-year-old woman was shot in the leg and was taken to the same hospital in serious condition. Another woman, 18, suffered a graze wound to he back and refused medical treatment on the scene.