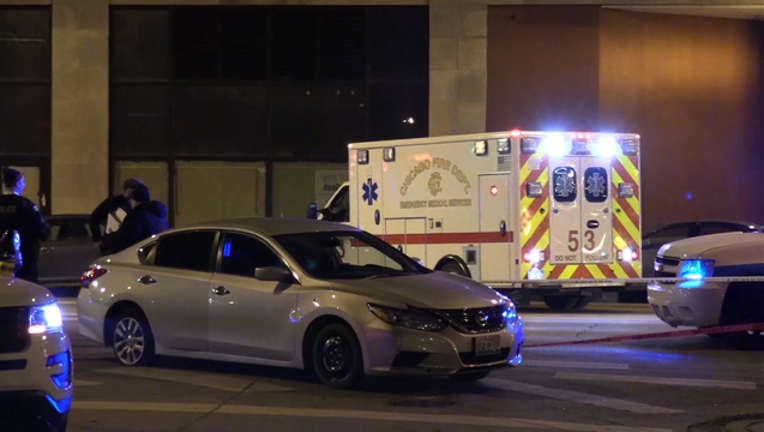 A man was shot shot to death in the back seat of a silver car in the 1600 block of West Monroe late Monday. | NVP News

CHICAGO (SUN TIMES MEDIA WIRE) - Three people were killed and at least 12 more were wounded in shootings across the city Monday, according to Chicago Police.

The day’s latest homicide happened about 11:30 p.m. on the Near West Side. Officers responded to a call of a person shot and found the 20-year-old man in the back seat of a silver car in the 1600 block of West Monroe, police said. He had gunshot wounds to the head and body and was pronounced dead at the scene. The Cook County medical examiner’s office did not immediately provide information on the fatality.

About 4:30 p.m., a 20-year-old man was shot in the lower body near 51st Street and Ridgeway Avenue in the West Elsdon neighborhood on the Southwest Side. He was pronounced dead at the scene at 4:41 p.m., police and the medical examiner’s office said. His name and the circumstances of the shooting have not been released.

About 2 a.m., 20-year-old Jamayah Fields was found dead with a gunshot wound to the head in the 5000 block of West Maypole outside an Austin neighborhood elementary school on the West Side, authorities said. Fields, who lived in South Bend, Indiana, was pronounced dead at the scene at 2:05 a.m.

The day’s latest nonfatal shooting happened at 11:24 p.m. in the South Chicago neighborhood. A 16-year-old boy was standing on a front porch in the 8000 block of South Marquette when another male walked up and opened fire, police said. The teenager suffered multiple gunshot wounds to the body and was taken in critical condition to Northwestern Memorial Hospital.

At 11:08 p.m., a 50-year-old was standing on the sidewalk in the 7600 block of South Cottage Grove in the Chatham neighborhood on the South Side when someone in a vehicle fired shots, police said. She suffered a graze wound to the face and later showed up at Jackson Park Hospital, where her condition was stabilized.

About two hours earlier, three people were wounded in separate shootings on the West Side in a 25-minute spate of violence.

About 9:30 p.m. in Lawndale, two people opened fire on a 24-year-old man on a sidewalk in the 3900 block of West Flournoy, striking him in the leg. He was taken to Mount Sinai Hospital, where his condition was stabilized, police said.

About 9:15 p.m. in Austin, two people tried to rob a 16-year-old boy in the 4900 block of West Hubbard, and then one of them shot the boy in the leg, police said. His condition was stabilized at Mount Sinai.

About 9:05 p.m. in Austin, a 29-year-old woman was shot in the back at the corner of Gladys and Cicero, police said. She was listed in serious condition at Mount Sinai.

A 21-year-old man was wounded in a Wrightwood neighborhood shooting about 6:50 p.m. on the Southwest Side. Someone pulled up in a vehicle as the man was walking in the 2400 block of West 79th Street and they began to argue, police said. A gunman then got out of the car, opened fire, got back in and took off. The victim was shot in the ankle and taken to Christ Medical Center in Oak Lawn, where his condition was stabilized.

Two men were, ages 22 and 35, were shot in the back about 6:15 p.m. in the 800 block of East 133rd Street in the Far South Side Altgeld Gardens neighborhood, police said. They were both taken in serious condition to Christ Medical Center.

Two more men were wounded in separate Lawndale neighborhood attacks that happened within 10 minutes and two blocks of each other.

About 5 p.m., someone opened fire from the passenger side of a dark-colored SUV in the 1400 block of South Spaulding, hitting a 19-year-old man in the hip, according to police. He was taken in good condition to Mount Sinai.

At 4:50 p.m., two people walked up to a 20-year-old man in the 1200 block of South Spaulding, demanded his things and then shot him in the abdomen, police said. He was also taken in good condition to Mount Sinai.

Early Monday, someone in a gray vehicle fired shots at a 24-year-old man walking at 1:23 a.m. in the 2000 block of West Diversey on the North Side, police said. He suffered a graze wound to the face and was listed in good condition at Swedish Covenant Hospital.

The day’s first shooting happened about 12:30 a.m. in the Portage Park neighborhood on the Northwest Side, where someone in a red vehicle shot a 22-year-old man in the arm as he drove in the 3600 block of North Central. He kept going to Community First Medical Center, where his condition was stabilized, police said.

Monday’s violence followed a weekend that saw more than 50 people shot across Chicago. At least 242 people have been shot in the city since the start of 2017.