3-year-old with autism banned from airline over not wearing mask, Chicago family says

A Chicago family says their 3-year-old boy with autism has been banned from an airline since he would not wear a mask.

CHICAGO - A Chicago family says their 3-year-old boy with autism has been banned from an airline since he would not wear a mask.

The family says Spirit Airlines kicked them off the flight, but the airline says the family started swearing at flight attendants and would not cooperate.

The mom says she did swear, but was not belligerent. It all started over her autistic son not being able to keep a mask on for the 4-hour flight.

“They just put him on the autism spectrum. He has sensory delay and speech delay,” said Zana Shelton.

Cebastian Lewis, 3, is nonverbal and at his age cannot read yet.

“It was a layover and everything, so it was two flights that we took to go there and he didn’t wear a mask,” Zana said. 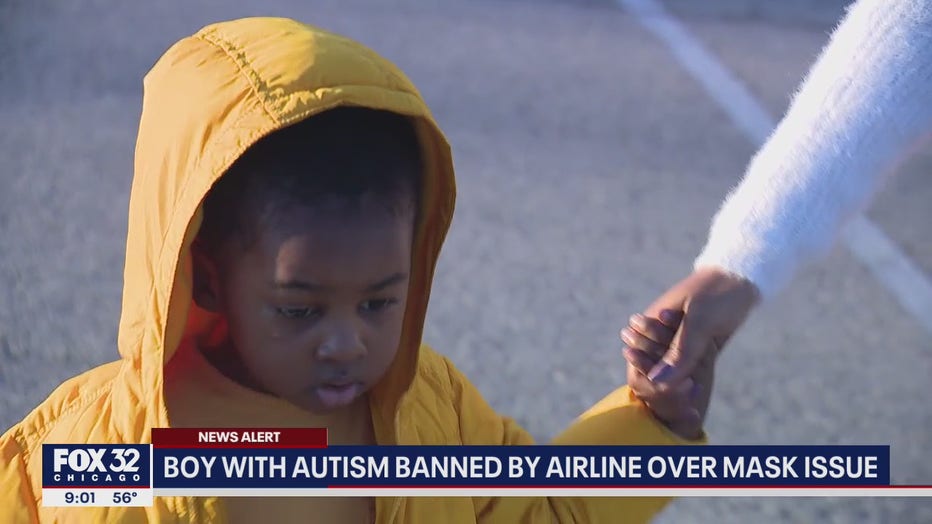 Zana, her son and two other family members took the 1,700 mile trek to visit family when it was time to return on Spirit.

“On the way back, she stopped us. She said if he doesn’t wear a mask he can’t get on the plane. I’m like well he’s autistic and we didn’t have this problem coming up here,” Zana said.

The family got the 3-year-old to wear the mask right before takeoff, but it did not last long.

“Soon as he sat in the seat he took it right back off,” Zana said. “Everybody had to deplane and then the police were called and they put in a police report on him.”

Spirit released a statement, saying they require face covering during the entire flight. The only exceptions are children under 2. Travelers unable to wear them for any reason, including medical, won’t be able to fly Spirit.

Days later, letters arrived in the mail, one to Zana’s sister and another addressed to 3-year-old Cebastian, banning the toddler from flying Spirit for non-compliance of the airlines face-covering policy. In 2 years, he can write a letter explaining why the carrier should reconsider.

Spirit says the letter sent to the child was a mistake, but that the family refused to cooperate and a family member used profanity towards the flight attendants while refusing to get off the plane.

Spirit did refund the family their money for the ticket back home. In total, the family spent $1,400 one-way to return to Chicago on Southwest Airlines.