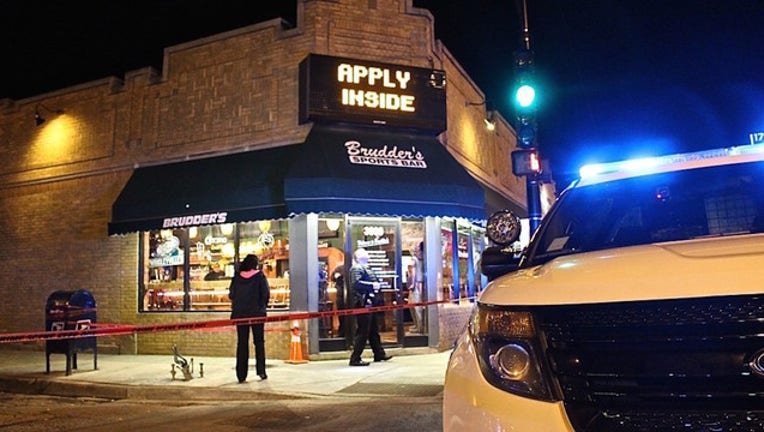 Police investigate a shooting at a bar in Irving Park late Saturday. | Daniel Brown for the Sun-Times

CHICAGO (Sun-Times Media Wire) - At least 33 people have been wounded in shootings across Chicago between Friday afternoon and early Monday.

Most recently, a 25-year-old man was shot early Monday in the South Shore neighborhood. He told investigators he was shot about 1:25 a.m. in the 7100 block of South Euclid, according to Chicago Police. He suffered a gunshot wound to the left foot and took himself to Jackson Park Hospital and Medical Center, where his condition was stabilized.

About an hour earlier, a man was shot in the Lawndale neighborhood on the Southwest Side. The 21-year-old was walking about 12:20 a.m. in an alley in the 1300 block of South Millard when someone in a dark-colored car shot him in the left leg, police said. He was taken to Mount Sinai Hospital, where his condition was stabilized.

About 10:35 p.m. Sunday, two men were shot in the South Side Woodlawn neighborhood. The men, ages 20 and 21, both suffered multiple gunshot wounds to their backs in the 6500 block of South Kenwood, police said. They were both taken to Northwestern Memorial Hospital, where their conditions were stabilized. A police source said the men were not cooperating with investigators.

About 30 minutes before that, a 31-year-old man was shot in the Canaryville neighborhood on the South Side. He was sitting in the back seat of an SUV in the 4800 block of South Wallace Street at 10:05 p.m. when a male standing on the sidewalk fired shots, hitting him in the right arm. He refused medical attention, police said.

About 9 p.m. on the Southwest Side, a 20-year-old man was riding a bike in the 6400 block of South Richmond in the Chicago Lawn neighborhood when two males walked out of a gangway and fired shots. He suffered a gunshot wound to the right cheek and was taken to Stroger Hospital where his condition stabilized, police said.

Twenty minutes earlier, a teenage boy was injured in a drive-by shooting in the Brighton Park neighborhood on the Southwest Side. The 16-year-old boy was standing on the sidewalk in the 3100 block of West 40th Street at 8:40 p.m. when a grey SUV drove by and someone inside fired shots, hitting him in lower right leg. The boy was taken to Mount Sinai Hospital where his condition stabilized, police said.

At 8:15 p.m., a 19-year-old man was walking in the 11000 South Indiana Avenue in the Far South Side Roseland neighborhood, when two males walked up to him and fired shots, hitting him in the left arm. He showed up at Roseland Community Hospital where his condition stabilized, police said.

A 27-year-old man was shot three blocks away an hour earlier in a separate Roseland shooting. The man, who is a gang member on parole, was shot in the left leg, right thigh and abdomen during a domestic fight in the 11300 block of South Indiana Avenue at 7:22 p.m. He was taken to Advocate Christ Medical Center in Oak Lawn in critical condition. The shooter was taken into custody, police said. Charges were pending Sunday night.

About 11:50 a.m. in the Park Manor neighborhood on the South Side, a 28-year-old man was sitting in a parked vehicle in the 7100 block of South Vincennes when a black four-door vehicle pulled up and someone in the front passenger seat started shooting, police said. He was shot in the left leg and a family member drove him to St. Bernard Hospital, where he was listed in good condition.

At least 21 more people have been shot across Chicago in other attacks between 5 p.m. Friday and 6 a.m. Monday.