A rare piece of history went on display Tuesday at the Field Museum in Chicago - a 3,500-year-old sword from the Bronze Age.

CHICAGO - A rare piece of history went on display at the Field Museum in Chicago on Tuesday - a 3,500-year-old sword from the Bronze Age.

The museum, which received the 3-foot-long weapon nearly 100 years ago from the Hungary National Museum, initially believed it was a replica. But new analysis shows that it's actually the real deal.

The sword was retrieved from the Danube River in Hungary back in the 1930s, where experts believe it may have been tossed as part of an ancient ritual to commemorate those lost in battle.

"Sometimes they seem to commemorate a treaty — literally, sometimes they are burying the hatchet: You’ll get a deposit of hatchets that are brand new," William Parkinson, curator of anthropology at the Field, said Tuesday.

Parkinson was on hand in the museum’s main hall to offer a teasing view of the Field’s upcoming exhibit, "First Kings of Europe," which will transport visitors back 5,000 years. 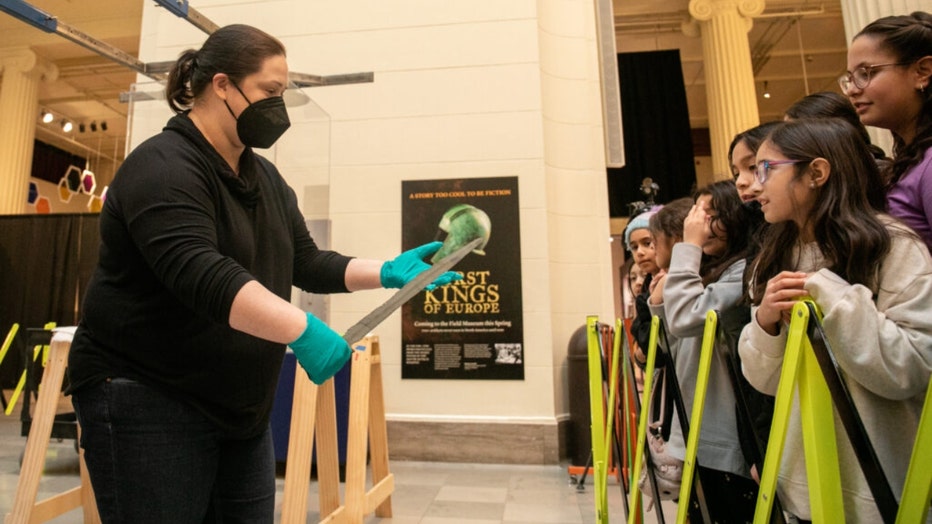 Ann Prazer, a mount shop supervisor, shows a 3,000-year-old Bronze Age Era sword to visitors during a press event at the Field Museum, Tuesday, Jan. 17, 2023. Found in the Danube River in Budapest, Hungary in the 1930s, scientists initially thought i (Pat Nabong/Sun-Times)

"Explore the rise to power of ancient Europe’s first kings and queens and discover how once egalitarian farming communities developed power, inequity, and hierarchy for the first time," according to the exhibition’s promotional materials.

Museum officials say a scholar visiting Chicago from the Hungarian museum last summer identified the clerical error and was the first to flag the sword as a historical object.

"So I pull it out, he looks at it for half a minute and says 'this isn't a replica, this is a real sword,'" Parkinson said. "This is a real 3,000-year-old sword that was thrown into the Danube River at the end of the Bronze Age."

"And usually it goes the other way. It's seldom that you've got something in your collection that said in the collection records for 100 years, ‘this is a replica’, that you find out that no, it's actually the real deal."

"At the very beginning of the Bronze Age, they already know how to smelt copper. Already extracting copper from ore. Then they start mixing it with tin, which is the big game changer," Parkinson said of the additive that made the metal much stronger.

At some point toward the end of the Bronze Age — which ran from about 3,000 B.C. to 800 B.C. — bronze swords likely clashed with the new-fangled iron ones, Parkinson said. But the moment wasn’t recorded for later generations.

And somewhere, too, European farmers saw horses for the first time, which arrived from southern Russia. That’s something visitors will hear about in the exhibition, which opens on March 31.

"That happened sometime about 5,000 years ago. We don’t know exactly when … but there was a moment when there were villagers working their farms and some guys come up on horseback. Can you imagine how mind-blowingly world changing that is?" Parkinson said.

The sword is being unveiled ahead of the "First Kings of Europe" exhibit, opening March 31 at the museum.

In the meantime, visitors can view the sword at the museum's Stanley Field Hall through Apr. 3.