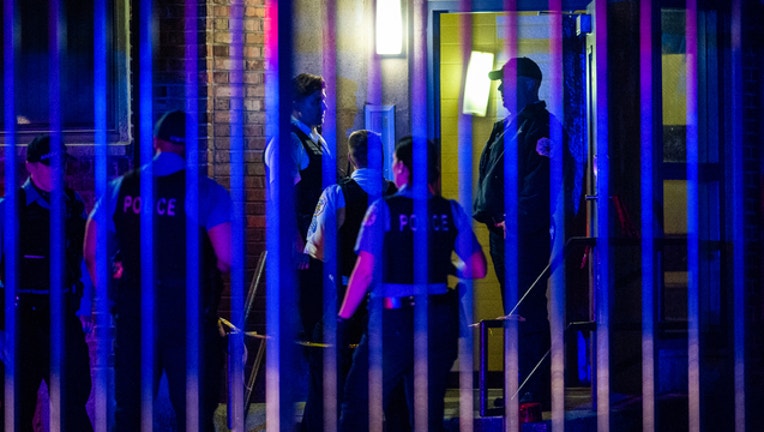 Chicago police on scene where four people including a pregnant woman, were shot, Friday morning, in the 6300 block of South King Drive, in the Parkway Gardens neighborhood. | Tyler LaRiviere/Sun-Times

CHICAGO (SUN TIMES MEDIA WIRE) - Four people were killed and 12 wounded in shootings on Friday across Chicago, including a pregnant woman who was among four people shot in Parkway Gardens on the South Side.

Just after 3 a.m., someone walked up the back alley stairs of a building in the 6300 block of South King Drive and fired shots into an apartment, according to Chicago police.

A 22-year-old woman who is seven months pregnant was hit in the leg, arm and upper body, leaving her in critical condition, police said. Another woman, 29, was struck in the leg, and her condition was stabilized.

Officers found a 20-year-old man with a gunshot wound to the foot outside the building, and his condition was stabilized, police said. All three were taken to the University of Chicago Medical Center.

A fourth man, 26, was found with a gunshot wound to the arm in the hallway of the building, police said. His condition was stabilized at Saint Bernard Hospital.

No arrests have been reported as Area South detectives investigate.

Several males approached him at 10:11 p.m. as he was walking in the first block of North Kilbourn Avenue, police said. They fired shots striking him in the back and upper body.

The man died at Mount Sinai Hospital, police said. No witnesses have come forward, and the circumstances of the shooting were unknown.

Less than an hour earlier, a 27-year-old man was killed in Lawndale on the West Side.

He was standing on a sidewalk about 9:20 p.m. in the 1500 block of South Christiana Avenue when someone opened gunfire, striking him in the head, police said. The man was pronounced dead at Mount Sinai Hospital.

Friday afternoon, a man was fatally shot during an argument in Englewood.

Jevonte Washington, 20, was in an alley about 1:50 p.m. in the 6600 block of South Winchester when the person he was arguing with pulled out a gun and fired shots, according to police and the Cook County medical examiner's office.

He was shot multiple times in the torso and back, authorities said. He died at the University of Chicago Medical Center.

No arrests have been reported as Area South detectives investigate.

In Friday's first fatal shooting, a man was killed in Chatham on the South Side.

The Bronzeville resident was taken to the University of Chicago Medical Center, where he was pronounced dead at 1:09 p.m. No one was in custody.

Eight more people were wounded Friday in shootings across the city. On Thursday, 10 people were shot and one killed.