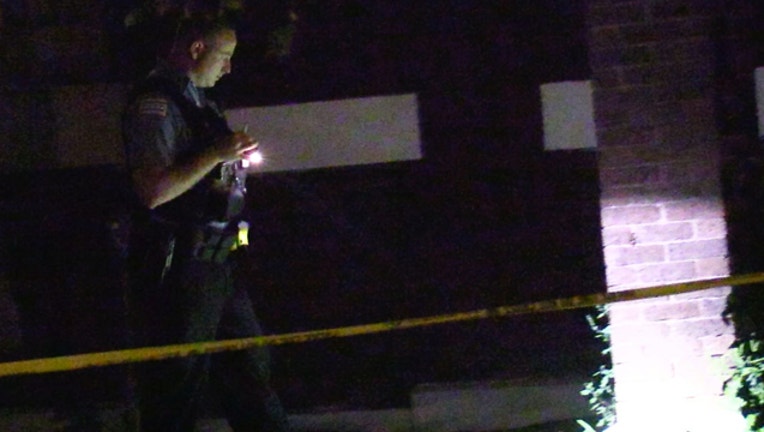 Chicago police investigate the scene where a man was shot, Wednesday morning, in the 7200 block of South May Street, in Englewood. | Justin Jackson/Sun-Times

CHICAGO - Four people were wounded Wednesday in shootings across Chicago, including a 24-year-old man who was shot in West Garfield Park.

He was on a sidewalk about 9 p.m. in the 200 block of North Kostner Avenue when two vehicles drove up and three people got out with guns, Chicago police said.

They fired shots as the man ran away, police said. The 24-year-old was struck in the shoulder and finger, and was taken to Mt. Sinai Hospital in good condition.

Earlier in the evening, a 19-year-old woman was wounded in a shooting in the South Side Marquette Park neighborhood.

She was on a sidewalk in the 7100 block of South Washtenaw about 6:45 p.m. when a vehicle approached her and someone inside fired shots, police said.

The woman was struck in the knee and taken to Christ Medical Center in Oak Lawn, police said. She was listed in good condition.

A person was being questioned by detectives after a man was wounded by gunfire earlier in the afternoon in Bronzeville on the South Side.

A 22-year-old man was on a sidewalk about 4 p.m. in the 600 block of East 47th Street when a Jeep approached him and someone inside fired shots, police said.

The man was struck once in the leg and taken to the University of Chicago Medical Center, police said. His condition was stabilized.

Police said a person of interest was detained and questioned by Area Central detectives.

The day's first reported shooting happened in Englewood on the South Side.

A 30-year-old man told police that he was sitting on a porch about 1 a.m. in the 7200 block of South May Street when a man in a red jacket approached him and opened fire before fleeing, police said.

He was struck in the leg and taken to the University of Chicago Medical Center where his condition was stabilized, police said.

On Tuesday, three people were killed and two more were wounded in citywide shootings.