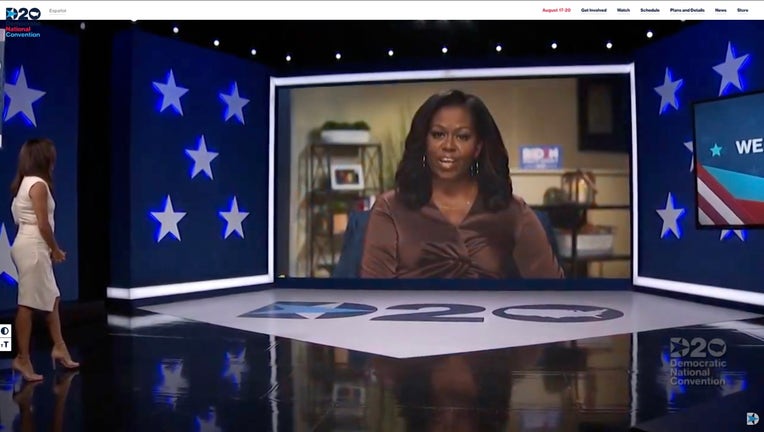 In this screenshot from the DNCC’s livestream of the 2020 Democratic National Convention, actress and activist Eva Longoria (L) introduces Former First Lady Michelle Obama to address the virtual convention on August 17, 2020. (Photo by Handout/DNCC via Getty Images)

LOS ANGELES - In another profound way that the coronavirus pandemic has upended American life, the Democratic National Convention started Monday with no convening. Instead, Democrats opted for the first virtual convention as the party begins the formal process of nominating Joe Biden as its candidate for president.

Here are five takeaways from the first night.

Michelle Obama, in an uncharacteristically pointed and political speech, said President Donald Trump is “simply in over his head,” as she forcefully made the case against his administration and tried to create a sense of urgency and energy for Joe Biden's candidacy.

Michelle Obama spoke during the 2020 DNC and gave her support for Joe Biden.

As one of the most popular women in the world, the former first lady's words carried added weight and set a tone for a convention that will try to make the election a referendum on the president's character as much as his record.

Four years ago, she used her Democratic National Convention speaking slot to highlight a slogan that didn’t work, politically, for her party in 2016: “When they go low, we go high!”

She insisted that was still the right path, but said that did not mean she wasn't vigorously opposed to Trump. “Let’s be clear,” Obama said. “Going high does not mean putting on a smile and saying nice things when confronted by viciousness and cruelty.”

She then pivoted to a searing critique of Trump.

“Donald Trump is the wrong president for our country,” Obama said during her prerecorded 18-minute speech — more than twice as long as any other speaker had. “He has had more than enough time to prove he can do the job but he is simply in over his head.”

The first chunk of the convention’s primetime hour was dominated by a quartet of Republicans -- part of Democrats’ effort to emphasize the breadth of their party’s coalition, and implicitly contrast it with the narrower one Trump has built.

The four prominent former Republican officials all slammed Trump and praised Biden, hoping to speak to what the Biden campaign believes is a big swath of the electorate that remains uncomfortable with the president. Biden's ability to unite the country has been a centerpiece of his campaign, and on Monday night Democrats tried to show that by cramming as wide an ideological spectrum as possible into a single hour.

“This isn’t about Republican or Democrat. It’s about a person — a person decent enough, stable enough, strong enough to get our economy back on track,” former Environmental Protection Agency chief Christie Todd Whitman said. “Donald Trump isn’t that person. Joe Biden is.”

That open-door approach for Democrats is an implicit contrast with Trump, who is notorious for slamming any Republican who publicly criticizes him and whose convention next week is not likely to feature as wide an ideological range. It makes it harder to agree on a governing platform besides Don’t-Be-Trump. But Democrats are gambling on that being sufficient to win.

Bernie Sanders spoke for the second time in four years as runner-up. But this one felt different.

In 2016, he led a surprising progressive insurgency. The palpable tensions between Sanders and nominee Hillary Clinton were on display even as Sanders nominated Clinton from the floor of the Philadelphia convention.

This time, Sanders delivered an unqualified endorsement of Joe Biden and a harsh indictment of Trump.

“At its most basic, this election is about preserving our democracy,” Sanders said, adding that “authoritarianism has taken root in this country” under Trump. “As long as I am here, I will work with progressives, with moderates and, yes, with conservatives to preserve this nation,” he said.

He added a litany of policy examples of “how Joe will move us forward” to address the fundamental economic inequities that Sanders has railed against for decades.

As runner-up, Sanders got his own time slot Monday night. He followed a video montage of more than a dozen other Democratic primary contenders introduced by Minnesota Sen. Amy Klobuchar. They all offered praise of Biden.

“Out of many, one,” Klobuchar said, translating the national motto “e pluribus unum.”

Together, it highlighted both Biden’s personal relationships in his own party and how much of a unifying force the desire to defeat Trump is for the Democratic Party in 2020.

When are the 2020 presidential debates?

With many of the usual staples of presidential campaign politics scrapped because of the pandemic, the debates between President Trump and Joe Biden likely will take on outsized importance.

One of the most urgent questions heading into a virtual convention was whether the format could generate enthusiasm. The first impression, charitably, is that it remains a tall order.

Actress Eva Longoria emceed the night’s programming, a combination of prerecorded and live material, from a studio. On one hand, Longoria’s video interactions with everyday Americans — a farmer, a student, a small business owner, among others — offered a better look at their lives than having them on a traditional convention stage in front of thousands of delegates.

But there’s also something lost when the headliners — well-known politicians who are used to much different environs — can’t feed off the crowd. You can take the same zinger against Trump or a wrenching personal biographical pitch about Biden, and it just won’t land the same way when delivered straight to a camera.

Democrats are clearly aware that they also lost the camera shots that at a normal convention would capture the party’s racial, ethnic and gender diversity — that much is assured by party rules on state delegations. They tried to make up for it from the start, with an invocation delivered in Spanish and English and a national anthem sung by children and adults from all over the country, representing a range of races and ethnicities.

Conventions have long been derided in some circles as infomercials. Now the evolution is complete.

Democrats showed out of the gate that they will continue to draw a sharp contrast with Trump and Republicans on the matter of racial justice — giving the issue emotional prominence on the opening night.

In the first half-hour, Democrats showcased the family of George Floyd, the Black man whose killing by a white Minneapolis police officer on May 25 spawned nationwide protests and intensified calls to address the nation’s history of systemic racism. One of Floyd’s brothers spoke about him and named a litany of other Black Americans killed by police, followed by a moment of silence.

George Floyd's death in Minneapolis police custody in May sparked waves of anti-racism protests across the country.

Mayor Muriel Bowser of Washington, D.C., introduced the Floyd family from Black Lives Matter Plaza, the stretch of 16th Street in Washington leading up to the White House that was repainted and renamed in the wake of Floyd’s death.

Bowser compared the history of peaceful protest in the nation’s capital with Trump ordering Lafayette Square cleared with tearing agents so he could walk to a nearby church to be photographed with a Bible.

“While we were peacefully protesting, Donald Trump was plotting,” Bowser said. “I knew if he did this to D.C., he would do it to your city or your town, and that’s when I said enough.”

Trump, meanwhile, confirmed two guests he has invited to participate at his convention next week: a white St. Louis couple who gained national headlines when they emerged from their house wielding weapons to confront protesters who were in their neighborhood.