CHICAGO - At least 34 people were shot — six of them fatally — over the weekend in gun violence across Chicago, including a 17-year-old girl who was killed Sunday in Back of the Yards on the South Side.

She was walking about 9:30 p.m. in the 900 block of West 52nd Street, when a man emerged from an alley and the two of them got into “a verbal altercation,” Chicago police said. The man then pulled out a handgun and shot her three times in the head and multiple times in the upper body.

The teen was pronounced dead at the University of Chicago Medical Center, police said. 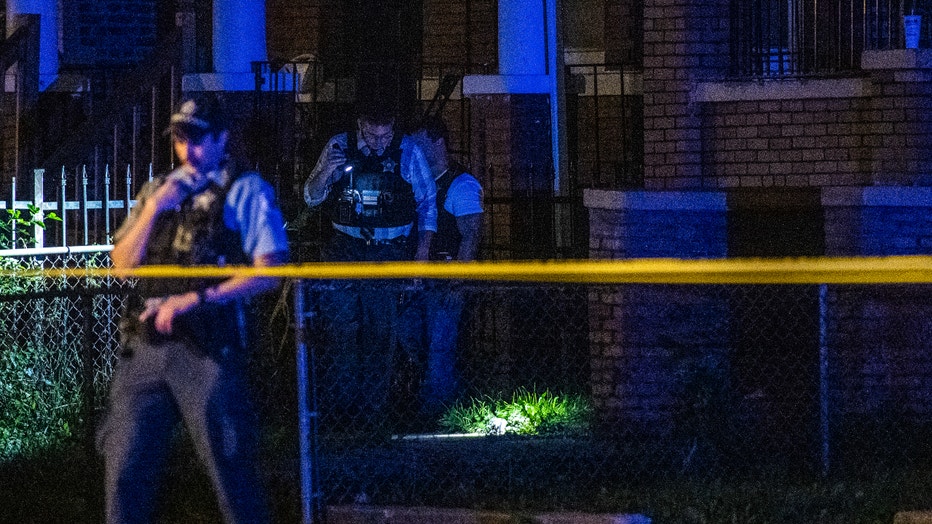 Chicago Police investigate the scene where a man was shot and killed, Sunday night, in the 900 block of North Long, in the Austin neighborhood. | Tyler LaRiviere/Sun-Times

A 32-year-old man was driving about 3:10 a.m. in the 7500 block of South Coles Avenue when someone unleashed gunfire, police said. The man was struck in the head and crashed into a parked car.

He was taken to the University of Chicago Medical Center where he was pronounced dead, police said. The Cook County medical examiner’s office hasn’t released details about his death.

On Sunday, a man was shot to death in Austin on the West Side.

Officers responded to a ShotSpotter alert about 11:15 p.m. in the 900 block of North Long Avenue and found the 49-year-old unresponsive, police said. He was found with multiple gunshot wounds to the head and one to the back.

He was rushed to West Suburban Medical Center where he was pronounced dead, police said.

A few hours earlier, a man was found dead with a gunshot wound on the Southwest Side.

About 7 p.m., officers found the body of a man in an alley in the 5400 block of South Lawndale Avenue, police said. The man thought to be between 40 and 50 years old was found with at least one gunshot wound to the neck.

Saturday, a man was killed and another wounded in a shooting in Little Village on the Southwest Side.

Albert Delgado, 43, and a 21-year-old man were traveling in a vehicle about 1:17 a.m. in the 2200 block of South Spaulding Avenue when someone on foot opened fire, police and the medical examiner’s office said.

Delgado was struck twice in the abdomen and was pronounced dead at Mount Sinai Hospital, authorities said. The 21-year-old was hit in the face and arm and was taken to the same hospital in critical condition.

Later that morning, a 48-year-old man was killed in a triple shooting in the same neighborhood.

Efren Gonzalez-Guerrero had just gotten into a vehicle with two other men about 6:15 a.m. in the 3900 block of West 31st Street when someone in another vehicle began shooting at them, police and the medical examiner’s office said.

Gonzalez-Guerrero was struck twice in the face and pronounced dead at Mount Sinai Hospital, authorities said. He lived in Archer Heights.

A 26-year-old man was shot five times in the chest and taken to Mount Sinai Hospital in critical condition, police said. The third man, 38, was taken to the same hospital with two gunshot wounds to the chest. His condition was stabilized.

At least 25 others were wounded in shootings between 5 p.m. Friday and 5 a.m. Monday.