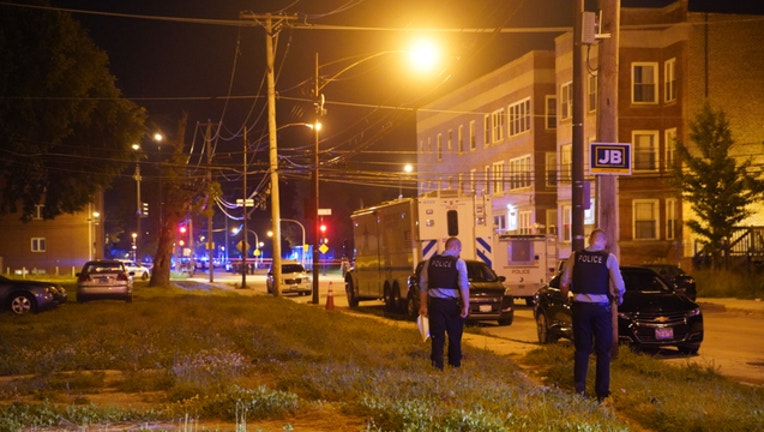 CHICAGO (SUN TIMES MEDIA WIRE) - Seven people were wounded and one killed Wednesday in citywide shootings, including an off-duty Chicago police officer who was shot while driving by an elementary school in Bronzeville on the South Side.

The off-duty officer, a 25-year-old man, was driving about 1:38 a.m. in the 200 block of East 37th Street when someone in a black vehicle opened fire, Chicago police said. The officer was shot in the head and taken to University of Chicago Medical Center where he is in critical condition.

No one is in custody as Area Central detectives.

In Humboldt Park, a teenager was shot to death while riding a bicycle.

The 17-year-old boy was riding a bike on a sidewalk about 5 p.m. in the 3900 block of West Iowa Street when a red Hyundai SUV approached, two people got out and one of them fired shots, Chicago police said.

The teen was struck multiple times in the head and body, police said. He was pronounced dead on the scene.

A 49-year-old woman was wounded in a shooting in West Pullman on the Far South Side.

About 3 a.m., she was walking past a gate to a sidewalk in the 12100 block of South State Street when she heard gunfire and thought she had been struck by debris, Chicago police said.

She didn’t realize she had been hit by a bullet in the thigh until hours later, police said. She was taken to Christ Medical Center in Oak Lawn where her condition was stabilized.

A man is in critical condition after he was shot in Austin on the West Side.

About 12:15 a.m., the 23-year-old was on the sidewalk with a group of people in the 700 block of North Menard Avenue when two men got out of a black Nissan sedan and fired shots at the group, Chicago police said.

He was struck in the shoulder and leg and rushed to Stroger Hospital for treatment, police said. The shooters got back in their car and drove away.

No one is in custody as Area North detectives investigate the shooting.

A teenager was seriously wounded in a shooting in the Marquette Park on the Southwest Side.

The 19-year-old man was walking with his mother on a sidewalk when he heard gunshots and started to run, Chicago police said. He was struck in the back and collapsed to the ground.

The shooting happened about 11:25 a.m. in the 7100 block of South Artesian Avenue, police said.

He was taken to Christ Medical Center in Oak Lawn in serious condition, police said. Shell casings were found at a second scene in the 2400 block of West 71st Street.

A 56-year-old man was shot in the back in Garfield Park on the West Side.

He was walking about 12:05 a.m. in the 3900 block of West Jackson Boulevard when heard gunfire and realized he had been hit, Chicago police said. He was rushed to Mt. Sinai Hospital where his condition was stabilized.

The man told police that he did not see the shooter and did not know where the shots came from, police said.

Two men were wounded in a shooting in Roseland on the Far South Side.

About 3 p.m., they were sitting on a curb in the 10400 block of South Maryland Avenue when an black vehicle approached and someone inside opened fire, Chicago police said.

A 19-year-old was hit in the thigh and the other man, 23, was struck in the thigh and leg police said. They were both taken to the University of Chicago Medical Center where their conditions were stabilized.