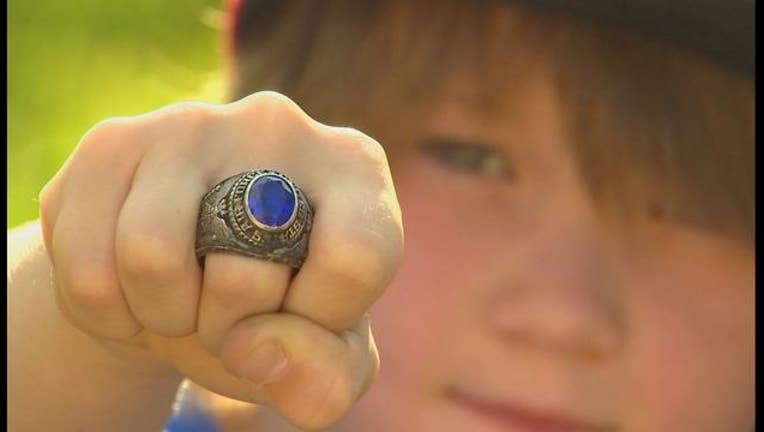 (KMSP) - An 8-year-old boy is trying to find the rightful owner of some type of Air Force ring he found in the dirt near the Crow River in Delano, Minn. last week. The military ring features a blue stone, an eagle with a shield on the side, the words United States Air Force prominently engraved on the top, along with the roman numerals of 1947, when the USAF was founded.

Wyatt Groff said he saw something shimmering in the sunlight partially buried in the dirt so he reached down and grabbed it. He rushed home with his find and had to make a tough decision: keep the ring for himself, or search for the owner.

He said he chose to find the person it belongs to because if it was his ring he would want it back.

“He knows the right thing to do,” his mom Nachelle Groff said.

Nachelle started to get the word out through social media and also contacted the local VFW and American Legion, but no luck.  Then she reached out to the United States Air Force Academy -- a representative said it didn't look like one of the rings given to graduates, but he wasn't 100 percent sure.

“My first inclination would say this is from the Air Force Academy,” John Bibeault, Vice President of the Scholastic division at Jostens, said.

“If it's an older ring, I believe it could be 10k gold, that's what I believe it is,” Louis Kruger, National Director of Scholastic Sales at Jostens, said.

Not only is Jostens the makers of Superbowl and class rings, but they make all the rings for every branch in the U.S. military.

Bibeault and Kruger believe their company can help find the owner if Wyatt brings it in. They said chances are better than not that Jostens made the ring.

“So we would have to go back and trace, pull up that year, trace the designs and see if we could go help locate who this person is,” Bibeault said.

For now, Wyatt is keeping the ring in a secret hiding place until someone steps forward.  In order to claim this ring, the owner will have to verify the initials engraved inside the band.

If you think it belongs to you or someone you know, we have more info on our Fox 9 News app. Or you can email Nachelle at nachelleg88@gmail.com