According to CWB Chicago, Flossmoor police arrived at the couple's home just 67 seconds after Kelley called 911.

CWB shared the audio from that call with FOX 32.

In the audio, you can hear Kelley say to the 911 dispatcher "No, not yet" when the dispatcher asked if anybody is hurt.

Kelley says, "Don't touch me." A woman's voice can then be heard saying, "Everybody's touching you. Get out."

Foxx allegedly slapped her husband during the domestic dispute, according to her spouse.

A police officer from the Flossmoor Police Department in Illinois was dispatched to a home on June 4 at around 10:00 p.m. in response to a domestic dispute between Kim Foxx and her husband, Kelley Foxx. Kelley Foxx dialed 911 to report a domestic dispute with his wife, according to the police report, which states that the officer was told that the dispute was physical but there were no injuries "yet."

Flossmoor police responded to the home of Cook County State's Attorney Kim Foxx last weekend after her husband called 911 to report a domestic dispute, according to a police report.

When the police officer arrived, he activated his body camera and saw Kelley Foxx and Kim Foxx standing on the front step. Kelley told the officer, according to the police report, that "Kimberly got mad about something that was posted on Facebook that he did."

Kelley claims that Kim Foxx then asked him to leave, which he refused. The situation then became physical, according to Kelley Foxx.

Paraphrasing what Kelley Foxx said, police wrote in the report "[Kelley Foxx] explained that Kimberly blocked him from leaving a bathroom."

Kelley also told the police officer that Kim Foxx grabbed his collar and threw his video game controller on the ground.

"He tried to turn on the TV and Kimberly snatched the controller out of his hand and threw the controller," the report states, paraphrasing what Kelley Foxx said.

The police officer wrote that Kim Foxx was close enough to Kelley Foxx while he was speaking to him, and could hear Kim Foxx say "all that is true." 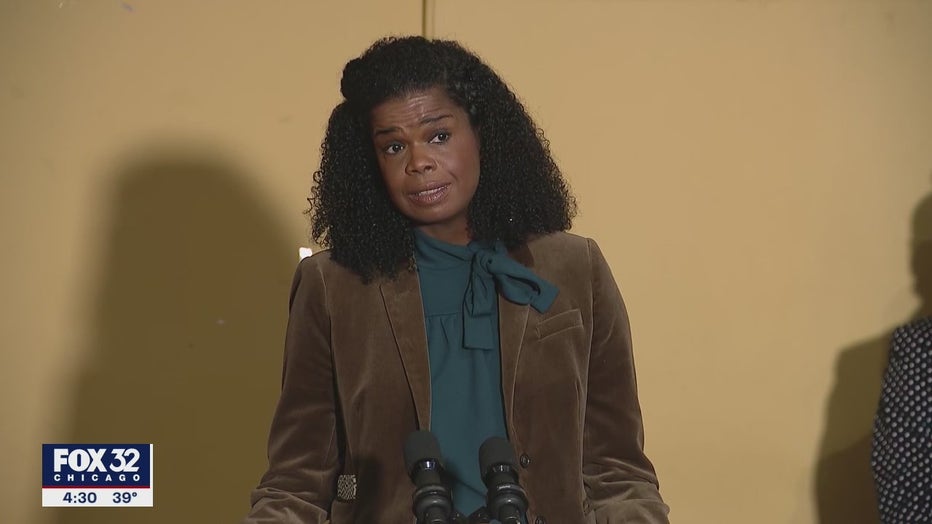 Kelley Foxx then alleged that Kim Foxx slapped him across the left cheek. The officer wrote that he did not "observe any indicators to support his claim of being struck. There was no redness or swelling visible on his face."

When told by the officer that he didn't see any marks on his face, he responded that he wants to be left alone.

"She can't come in my personal space and put her hands on me," Kelley said, according to the report.

The officer asked Kelley Foxx if he felt safe in the house, and he responded that he wanted to make sure someone understands what was going on.

"I asked him to explain what is happening here meant and he said she is being physically aggressive. He added that he just wanted it to stop," the officer wrote.

A separate police officer spoke to Kim Foxx, and said that she had an argument with Kelley Foxx and wanted him to leave.

Police also spoke with the Foxx's 19-year-old child about the incident, who said that she heard a disagreement "but could not tell what was going on and did not see anything."

Kim Foxx told police, according to the report, that she did put her hands on Kelley Foxx, but it was only to guide him out of the house and says she didn't slap him.

The embattled state's attorney, who won a second term while taking credit for a decline in shootings and killings during her first term, suggested she should not be held to account for the explosion of violence during her second term, pointing to many other cities across the U.S.

Kim Foxx and Kelley Foxx both told police they have been together for over 20 years and things have never gotten physical.

No arrests were made, according to the police report.

A source inside Foxx's office told Fox News that "we all" knew about the incident right away.

"We all knew about it right when it happened but we were waiting for the corruption to start. How would they make this go away," the source said. "We’re always told we have to be held to a higher standard, she is our boss."

The source added that the incident will likely "go away."

"I’m born and raised here in Chicago, I think it’s going to go away. Like everything else. When the machine democrats get in trouble, they make it go away," the source said.

Kim and Kelley Foxx released a statement: "This is a personal family matter, and we ask that you provide our family with respect and privacy."