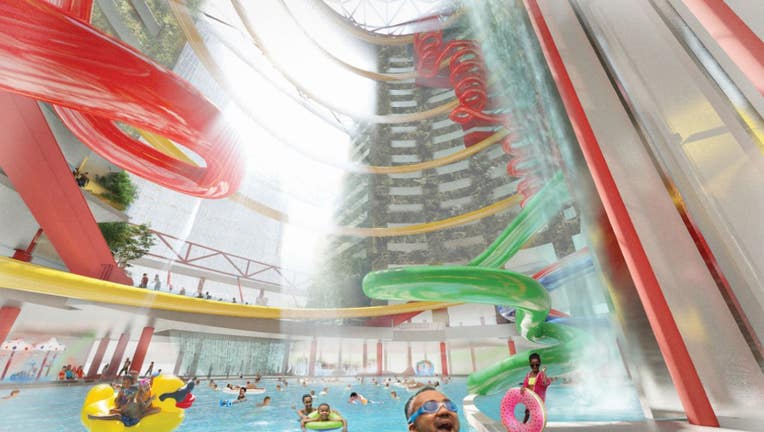 CHICAGO - A waterpark? A school? A gigantic electronic art project? Those are just some of the ideas submitted to a contest looking for out-of-the-box ideas for the future of Chicago's James Thompson Center.

The Thompson Center is located in the Loop and owned by the state of Illinois. It was designed by legendary architect Helmut Jahn and built in 1984. The state put it up for sale in May 2021, citing the massive costs of repairing and maintaining the building, which is mostly a gigantic glass atrium.

One of the entries, called "Public Pool," recommends that the offices around the atrium be turned into a hotel. The hotel would ring an indoor waterpark with massive waterfalls set in a garden. "Public Pool" was submitted by David Rader, Jerry Johnson, Ryan Monteleagre, and Matt Zelensek of the Perkins & Will architecture firm of Chicago.

The winners will be announced on Sept. 14.

Helmut Jahn, a prominent German architect who designed an Illinois state government building and worked on the design of the FBI headquarters in Washington, was killed when two vehicles struck the bicycle he was riding outside Chicago.