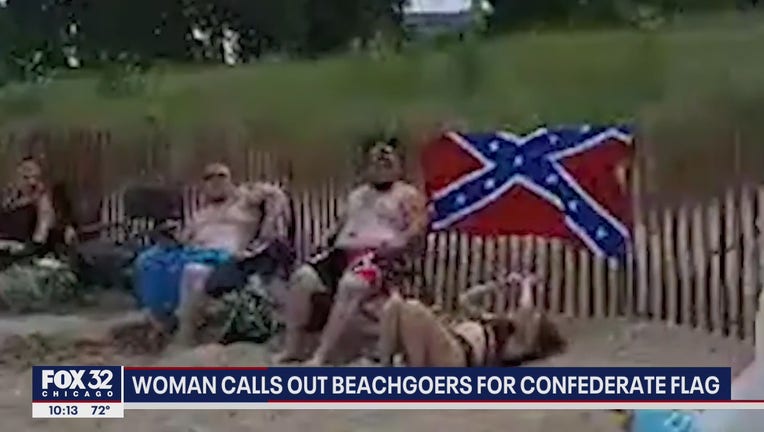 EVANSTON, Ill. - A day at the beach turned into a history lesson on racism - and it was all caught on camera.

“This is Lighthouse Beach and I happen to be the only black person on the beach and I can’t feel comfortable in my own neighborhood,” said Evanston resident and history teacher Lashandra Smith-Rayfield in a Facebook Live video.

“This is the United States of America, not the Confederacy of America. That flag had validity for two years. I am here to tell you, that flag is a racist symbol of hate,” said Smith-Rayfield.

The Facebook Live video was recorded Wednesday afternoon, which has garnered over 140,000 views and a lot of support from the community.

“This represents what Evanston is in its majority,” said Smith-Rayfield.

Smith-Rayfield even offered to pay for the towel so the family would remove it, but then a man who wasn’t with the group chimed in.

“These guys have done nothing, they aren’t bothering anyone. That’s so sad, the problem that it is bothering someone,” the man said.

The towel was there for at least 30 minutes before the family took it down.

“The guy said he was fine with it and shook his hand. He validated their racism and then I became the angry black woman,” said Smith-Rayfield.

The mayor of Evanston, Steve Hagerty, said that he believes Evanston is a welcoming city, where no would should feel threatened.

“This is not a place where you should feel threatened or bullied or make anyone feel less than anyone else,” said Hagerty.