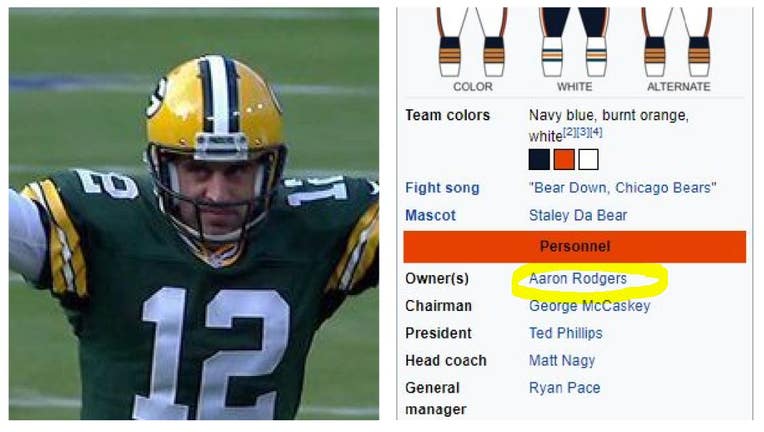 CHICAGO - Green Bay Packers quarterback Aaron Rodgers led the team to another victory over the Chicago Bears on Sunday, and he was reveling in it, to the disgust of many Bears fans.

"I still own you," Rodgers shouted at Bears fans as he celebrated a touchdown.

The Packers have beaten the Bears 20 times in the past 23 games, if you count the playoffs.

Later, Rodgers said that he made the comment as he looked up into the stands and saw a woman (presumably a Bears fan) giving him a "double bird."

Someone went into Wikipedia on Sunday and changed the Chicago Bears page to list Rodgers as the owner of the team. Wikipedia accuracy is maintained by volunteer editors, and the listing was changed back within minutes.

Some Bears fans thought Rodgers' comment went beyond trash talk. Dan Katz of Barstool Sports tweeted: "Did Aaron Rodgers just say "I own you" to the crowd? That’s disgusting. How do we let kids watch this? Do something @nfl."

The Chicago Bears are officially buying Arlington Park, which makes their move from Soldier Field look even more realistic.