Some demanding caged coyote in Cook County be moved to sanctuary

As the temperatures drop, a coyote controversy heats up in a Cook County forest preserve.

NORTHBROOK, Ill. - Ricky Gervais is calling on Cook County officials to surrender a coyote that has been confined for most of its life in an outdoor enclosure at a Northbrook forest preserve.

The actor and comedian said Tuesday he is lending his support to a campaign led by animal protection group In Defense of Animals, demanding the River Trail Nature Center surrender Rocky to a more suitable facility in Colorado.

The 4-year-old coyote has lived at the north suburban preserve since 2018 due to a case of mistaken identity.

"Rocky should not suffer the consequences of human error– it’s not his fault that people mistook him for a German Shepherd puppy," Gervais said in a statement.

Rocky was surrendered to an animal control facility in Tennessee after someone had mistaken the coyote for a dog. By the time the mistake was discovered, the pup had "imprinted on humans", and was deemed unreleasable into the wild. 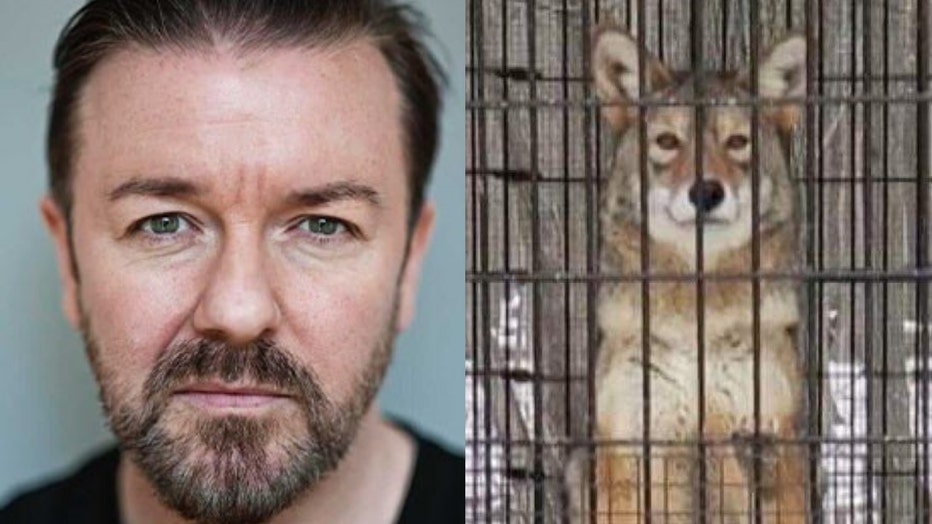 Since then, Brian Winters and his team at the River Trail Nature Center have cared for Rocky along with other animals, including injured birds. The forest preserve calls them "ambassador animals" that help educate visitors about wildlife.

"This coyote doesn't just require the usual care that one would give to an animal like this, but also regular human interaction. For all intents and purposes, we are his family," said Winters, River Trail Nature Center Naturalist, Assistant Director.

But Gervais said Rocky's captivity has resulted in various signs of stress including pacing, biting and licking his paws, and scratching, for which he is on antidepressant and anti-anxiety medications.

"His physical and psychological deterioration must end. The fact that Rocky is on antidepressant and anti-anxiety medications is evidence of his inhumane captivity and urgent action is needed to help him," Gervais said.

Coyote to remain at Northbrook nature center, but animal program to be reviewed

The coyote being kept at a Northbrook nature center will remain there.

In Defense of Animals along with Chicago Alliance for Animals have called on Cook County officials to transfer Rocky to The Wild Animal Sanctuary in Keenesburg, Colorado, a facility they say will give the coyote more freedom and reduce his stress, allowing him to be taken off medication.

"For his well-being and his long-term health, Rocky should be surrendered to The Wild Animal Sanctuary in Colorado," said Brittany Michelson, Captive Animals Campaigner for In Defense of Animals. "Just because he interacted with humans instead of other coyotes at a young age, doesn't mean he should be deprived of the opportunity to socialize with members of his own species. Rocky is clearly suffering at the River Trail Nature Center and the ethical thing to do is to allow him to live out his days in a sanctuary."

On July 26, Cook County officials made the decision to expand Rocky's enclosure at the forest preserve rather than transfer the coyote to the wildlife sanctuary in Colorado.

A petition to relocate the coyote to the Colorado sanctuary has garnered more than 20,600 signatures.