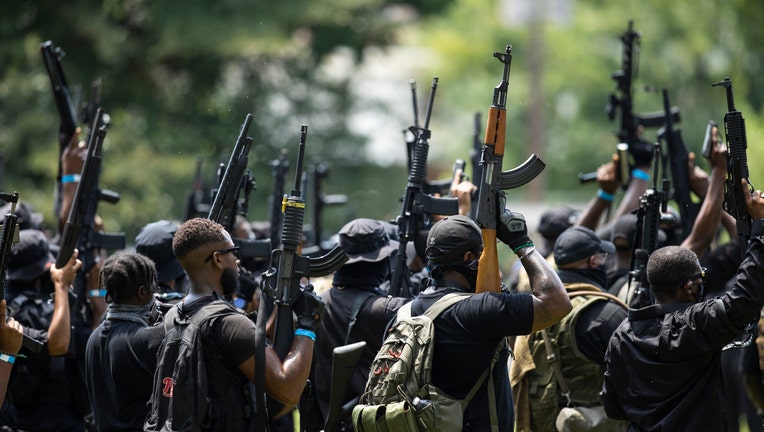 LOUISVILLE, KY - JULY 25: Members of NFAC hold up their firearms before a march on July 25, 2020 in Louisville, Kentucky. The group is marching in response to the killing of Breonna Taylor. (Photo by Brett Carlsen/Getty Images)

Police closed streets and set up barricades to keep the two groups apart as tensions remained on edge in Louisville, where protests have flared for months over the death of Taylor, a Black woman killed when police busted into her apartment in March.

By the time Black activists dressed in black fatigues arrived in the heart of downtown Saturday afternoon, most of the white militia members had already left. Police in full riot geared looked on.

Earlier in the day, police say three Black activists were accidentally shot in a park where the militia had gathered. Police say the victims had non-life-threatening injuries.

Black activists converged on Louisville to demand justice for Taylor. Calls for a national reckoning over racism and police brutality intensified following the deaths of Taylor and George Floyd in Minneapolis.

"This is something that has been happening around the country for years and years and years," said Brianna Wright, who joined in the demonstrations Saturday. "This is nothing new. The justice we get for her will influence justice around the entire country. And if we don't get justice ... it will also influence the entire country. Because they'll think, `It's OK, we can get away with it.' But we need to show them that Black people are not going to stand for this anymore."

The only confrontation among the competing groups appeared to occur earlier Saturday when white militia members and Black Lives Matter activists yelled at each other over the police barricades.

Taylor, a 26-year-old EMT, was fatally shot when police officers burst into her Louisville apartment using a no-knock warrant during a narcotics investigation. The warrant to search her home was in connection with a suspect who did not live there and no drugs were found.