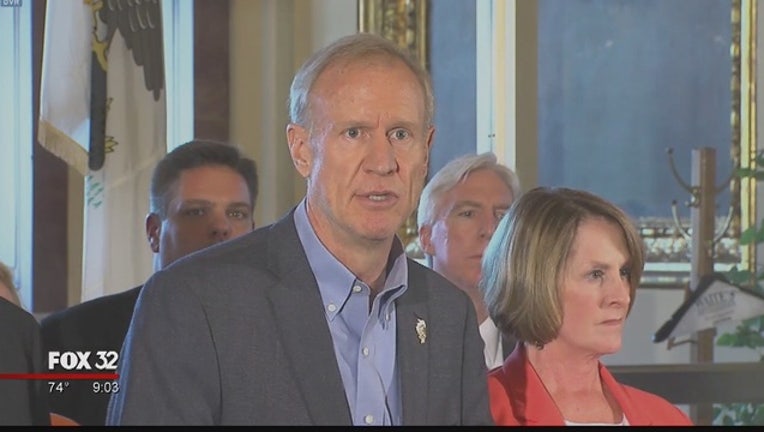 SPRINGFIELD, Ill. (AP) — Illinois has redefined what it means to have a late budget.

Other states have gone several months without a spending plan before, and Illinois has had prior delays that caused great anxiety. But going an entire fiscal year without a full budget? It's the only time in post-World War II history it's happened in the country.

"Late budgets will have a new meaning after you guys are done," said Arturo Perez, a fiscal analyst with the National Conference of State Legislatures who has researched past overdue budgets nationally.

So what did past budget delays here and elsewhere look like? And how did Illinois get to this point? Here's a look.

Jim Edgar found himself in an unsettling position as Illinois governor in 1991 when the state went 18 days without a budget.

"We thought '91 was protracted and it looks like child's play compared to what they've gone through this year," the former Republican governor said.

The 1991 standoff, which Edgar said "seems like just a moment" compared to today, kept staff at colleges from collecting their paychecks.

At the time, Edgar said the state had not experienced a budget delay like it.

REASONS FOR PAST DELAYS

Back then, Edgar found himself disagreeing with Democratic House Speaker Michael Madigan, much like current Republican Gov. Bruce Rauner. The sticking point now is Rauner wants business-friendly, union-weakening legislation as a condition of raising taxes to pass a full, balanced budget.

In 1991, a bad economy forced layoffs and budget cuts, but the gridlock was over what to do about a temporary two-year income tax surcharge that brought $700 million annually to schools and local governments. Edgar and legislators resolved their differences by agreeing to make the surcharge for education permanent, while extending the tax for local governments for another two years.

There were other late-budget scares in the 1980s and '90s that had state workers worried about getting paid, said Kent Redfield, a professor emeritus of political science at the University of Illinois in Springfield. One of those times, Redfield said he considered getting a short-term bank loan to make a mortgage payment, but the budget was resolved in time.

In the late 2000s, the state had three straight years where the budget was delayed for several weeks.

This year, Pennsylvania went nine months without a budget because the Democratic governor wanted a multibillion-dollar tax increase from ruling Republicans. Ultimately, Republicans passed a spending package without new taxes.

Prior to Pennsylvania and Illinois, the distinction for having the longest-budget stalemate belonged to Kentucky, which went nine months without a spending plan in 2002 because of a disagreement over campaign finance legislation.

One big reason Illinois' standoff has gone for so long is court-ordered spending has guaranteed payments to state workers and other critical government obligations, like funding for Medicaid. Illinois is among 13 states where some or all payments continue without a budget, according to NCSL.

Rauner and the Democrat-led Legislature had a breakthrough Thursday, agreeing to fund state government for the next six months and giving schools enough money to stay open a full academic year.

However, in six months the partisan gridlock will likely continue. Rauner plans to keep pursuing the agenda that has angered Democrats, and they've shown no desire to give him what he wants.

And the legacy of this fiscal year's impasse will remain for years. Illinois is about $8 billion backed up on bills and the autopilot spending is increasing the state's debt.

"It's going to take forever to get out of the debt," Redfield said.