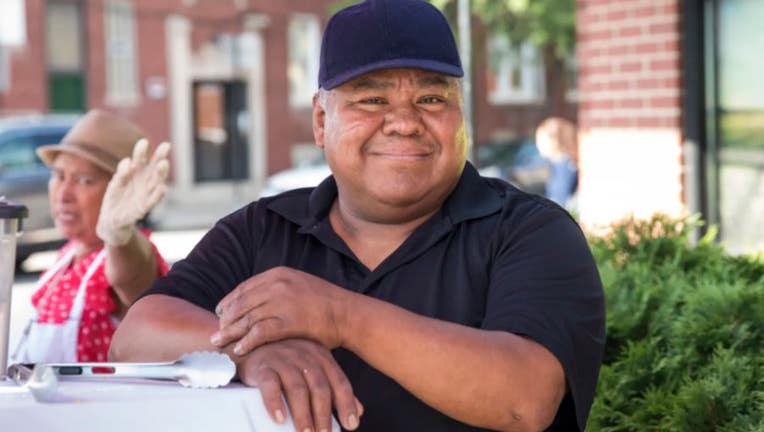 Felipe Vallarta, 58, an elotero, serves corn from his stand at the intersection of Clark and Rogers in Rogers Park, Sunday afternoon, June 24, 2018. | Ashlee Rezin Garcia/Sun-Times

CHICAGO - Felipe Vallarta — a beloved elotero who has sold everything from corn to tamales on a Rogers Park street corner for several years — was hospitalized last month with COVID-19 and is currently in a medically induced coma.

When he wasn’t selling elotes — the popular Mexican street food of corn drizzled with butter, mayonnaise, cheese and seasonings — Vallarta was working a part-time job at a restaurant, his granddaughter, Jany Andrade said.

Vallarta, 60, does not have health insurance, and Andrade has set up a GoFundMe page to cover his medical expenses.

Vallarta was diagnosed with COVID-19 in mid-April, just five days before he was scheduled to receive his first dose of the vaccine, Andrade said. He was transferred to the Intensive Care Unit and placed in a medically-induced coma April 25.

Vallarta’s wife, Zenaida Castillo, said she plans to return their stand to the corner of Rogers Avenue and Clark Street on Tuesday, after a difficult couple of weeks following Vallarta’s diagnosis.

"In truth, I’ve never lived with depression and I don’t want to accept it, but these days I’ve been going to bed really late and I don’t feel normal. I’m not doing well," Castillo said in Spanish.

"It’s more sad than it is difficult," Castillo said of going back to work without her husband. "We’ve worked together for years; he always knew what he had to do and I knew what I had to do… we understood each other really well."

Castillo said she’s grateful for the donors who have contributed to the GoFundMe page —which has raised over $5,000 of its $25,000 goal — as well as friends and customers who have reached out to offer their best wishes.

"[They tell me] they miss him a lot, that they want him back selling [food]. People ask my daughter and I what we’re doing and where we’ve been. They say they want to eat our tamales and elotes," Castillo said.

Vallarta’s immediate family in Chicago has been calling him via Zoom every day, and connecting him with relatives in Mexico the same way, Andrade and Castillo said.

"He’s was on a paralytic because he’s mentally there and can hear us, and he’s been very anxious and his body has been moving a lot," Andrade said. "They had to give him more sedation, because he just wants to wake up."

Vallarta has another week to go before doctors will consider awakening him from his coma, according to Castillo. Until then, she said she just hopes that he knows how much his family and friends love him.

"All his family is worried about him, especially his kids and grandkids; we just all want him to get better, God willing," Castillo said. "There’s a lot of people who like to sleep a long time, so I think he’s just sleeping."