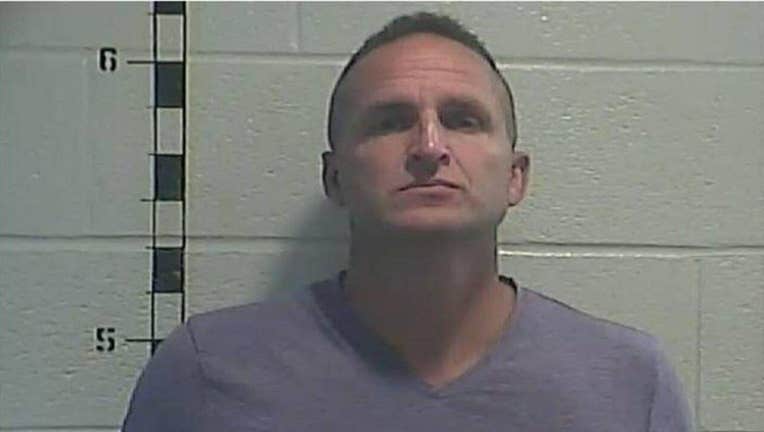 Mugshot of fired Louisville police officer Brett Hankison. (A grand jury announced that former Hankison was charged with three counts of wanton endangerment in connection to the police raid on the night of March 13. His bond was set at $15,000.)

LOUISVILLE - Det. Brett Hankison, the since-fired Louisville police officer who now faces charges in connection with the Breonna Taylor case, was “visibly shaking” soon after the March drug raid that left Taylor dead -- and feared losing his job, a city police chief – who also lost his job -- testified soon after the incident.

Former police Chief Steve Conrad – who himself was fired in June by Louisville Mayor Greg Fischer because the raid officers were reportedly not recording body-camera footage of the raid – said he encountered Hankison at the hospital where another officer, Sgt. Jonathan Mattingly, had been taken after being wounded in the raid, Louisville FOX affiliate WDRB-TV reported.

Conrad told investigators March 18 – five days after the raid – that he thought it was unusual for Hankison to be at the hospital – rather than in the company of personnel from the police department’s Public Integrity unit, who normally meet immediately with officers involved in shootings.

“It’s just so contrary from what I’ve seen in previous officer-involved shootings,” Conrad said in the March interview, a transcript of which WDRB obtained Saturday.

“I mean, they … My experience is they are brought to the Public Integrity by, you know, members of – of this unit,” Conrad continued.

Conrad said he recalled offering Hankison his support after hearing the officer was worried about being fired.

“Man, I hope you’re OK,” Conrad recalled telling the officer. “You know, we’ll work through this.”

The former chief said Hankison was “visibly shaking” at the hospital – “You know, not kinda – not scared – not scared but that – that kind of nervous sort of energy that you have after – after something traumatic, you know, happens.”

What happened March 13, according to authorities, was that police entered Taylor’s home as part of a drug investigation and faced gunfire from Taylor’s boyfriend -- with one officer being wounded. The officers returned fire, with several of the resulting shots striking Taylor, 26, resulting in her death. Authorities later said Taylor was unarmed.

Walker’s attorneys have argued that it remains unclear whether Mattingly was wounded by a shot from Walker’s gun or from a fellow police officer’s weapon, WDRB reported.

In the hours immediately after the raid, Conrad told investigators, two police commanders – Lt. Col. Josh Judah and Lt. Les Skaggs -- initially gave him an inaccurate version of Taylor’s role in the events of March 13.

According to the transcript obtained by WDRB, Conrad said the commanders initially told him Taylor had pointed a rifle at police after they entered the apartment.

“And she was the one directing the fire, you know, at them,” Conrad told the questioners, who were identified as Sgt. Amanda Seelye and Sgt. Jason Vance.

Conrad said he was initially told that “the woman was in fact the shooter.”

Neither Seelye nor Vance appeared to question Conrad further about the inaccuracy about what he heard about Taylor – or whether Conrad had had further conversation with the commanders about the case, WDRB reported, citing the transcript.

Conrad later said it was Hankison who told him that a man, not a woman, had fired at police, the transcript said.

Mattingly, Hankison and a third officer, Det. Miles Cosgrove, all fired their weapons during the raid, authorities have said.

Only Hankison faces charges following a review of the case by a Kentucky grand jury. That panel’s decision last week to indict only Hankison – and on charges of wanton endangerment that are not directly related to Taylor’s death – helped spark rioting in Louisville over the past several nights.

Hankison has been accused of firing wildly into the apartment, with some shots entering a neighboring residence, according to reports.

Hankison posted bail and was freed within hours of being booked last week.

Both Walker and Taylor’s family have filed lawsuits in connection with the case.

Meanwhile, Mattingly reportedly plans to sue those who have referred to him as a “murderer” in connection with the case, the Courier Journal of Louisville reported.

Nothing illegal was found inside Taylor’s apartment, and neither she nor Walker were targets of the police investigation.

The main target – Jamarcus Glover, reportedly a previous boyfriend of Taylor’s – had already been arrested at a separate location miles away from the apartment, attorneys have said, according to WDRB.

For updates, go to FoxNews.com.