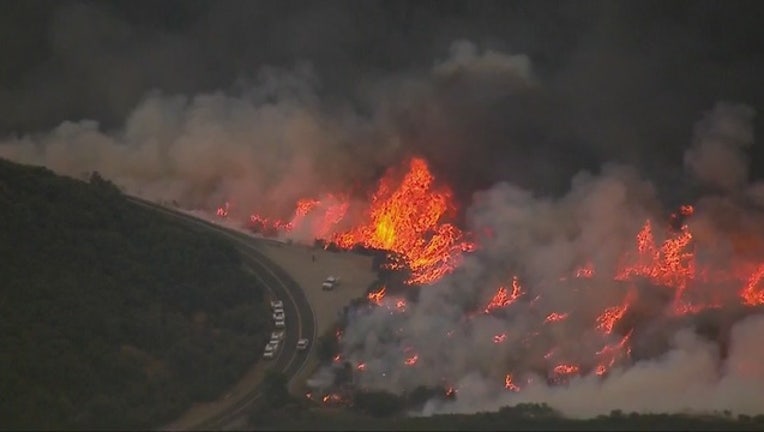 Brown on Saturday toured Ventura County neighborhoods ravaged by a weeklong wildfire that killed at least one person and destroyed hundreds of homes and other buildings.

At a news conference, Brown said drought and climate change mean California faces a "new reality" where lives and property are continually threatened by fire, at a cost of billions of dollars.

He added that gusty winds and low humidity are continuing and warned that there's a good chance of seeing "firefighting at Christmas."

He said it will take "heroic" efforts in the U.S. and abroad to stem climate change and urged U.S. lawmakers to pay more attention to dealing with natural disasters such as fires, floods and earthquakes.

Authorities say they've counted some 800 homes and other buildings destroyed by wildfires ravaging Southern California for the past week.

One person died in a car crash Wednesday trying to escape the largest fire in Ventura County.

The fire also is burning toward a sanctuary for the endangered California condors in Los Padres National Forest.

California Gov. Jerry Brown will visit the scene of a deadly wildfire in Ventura as firefighters continue the battle against wind-whipped blazes that have torched hundreds of homes.

Brown will survey damage from the Thomas Fire on Saturday and will meet with emergency management officials and residents.

The fire is the largest of six that have scorched Southern California. The fires from Ventura County to San Diego County have destroyed more than 500 buildings, killed dozens of horses and forced hundreds of thousands of people to evacuate.

One death is blamed on the Ventura blaze: A 70-year-old woman who crashed her car while evacuating.