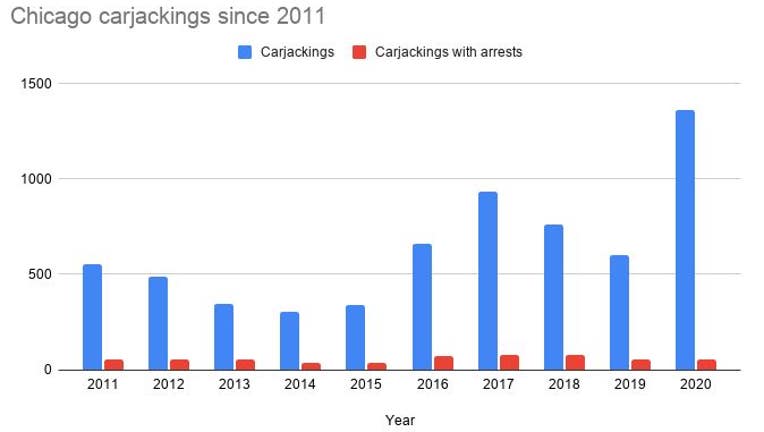 While the coronavirus pandemic and widespread mask use may have emboldened criminals, police officials said carjackings were rising well before the March stay-at-home order.

Still, the pandemic placed even greater economic pressure on some residents in areas where good jobs are scarce.

"COVID has made a situation that’s already desperate even more desperate," said David Stovall, professor of African American Studies and criminology at the University of Illinois-Chicago.

"It’s never excusing the action. It’s about understanding it. It’s an act of desperation."

In July, a group of armed kids, some as young as 10, were wanted for more than a dozen carjackings on the South Side. And earlier this month, retired firefighter Dwain Williams, 65, was killed when he exchanged gunfire with four carjackers outside a Morgan Park popcorn shop.

Last year, 663 carjackings were reported, police data shows. This year, with carjackings occurring at the rate of four per day, all 22 Chicago police districts saw an increase in carjackings — but the tallies were highest in some South and West side neighborhoods.

Three districts had more than 100 carjackings in 2020: The Near West, Gresham and Harrison districts, which each saw more than double the carjackings over last year.

But in one district, carjackings tripled: the Town Hall district, covering parts of Lincoln Park, Lake View, Uptown and Ravenswood on the North Side. It had 38 carjackings, compared with 11 in 2019.

CPD Supt. David Brown has acknowledged the "extraordinary spike" in carjackings and said the department was "doubling down," arresting more than 130 for carjacking by mid-December.

But despite the increase, police made roughly the same number of carjacking arrests both years: 53 so far this year versus 51 in all of 2019, according to police records.

In February, with carjackings already spiking in the city and suburbs, Chicago police partnered with Illinois State Police and Cook County sheriff’s office to set up a dedicated unit. The city has said it "increased the strategic use" of license plate readers on Lake Shore Drive and downtown to match plates with vehicles reported stolen.

The jump in carjackings stands alone among other rising crime in the city. Even the city’s increase in gun violence this year doesn’t compare. Chicago saw a 50% jump in shootings and murders over last year, and is closing out 2020 with nearly 800 homicides.

Carjackers also targeted ride-hail drivers more frequently in 2020. This year, 14 carjackings involved drivers for services such as Uber and Lyft; compared to one each in 2019 and 2018, according to police records.

Just this week, police said a trio had targeted four ride-share drivers in Roseland. In each case, the driver was given a destination near 113th Street and King Drive; once there, the rider would pull out a gun and take the vehicle.

Experts say the pandemic may have shifted criminals toward carjackings and away from other crimes.

Working from home may explain a 9% decrease in burglaries from last year, and closed shops may have contributed to a 20% decrease in theft, according to Art Lurigio, professor of criminology at Loyola University.

"The carjacking opportunity has always been there," Lurigio said.

A carjacking — stealing a car by force or by threatening force — is more predictable than a typical armed robbery, from the criminal’s point of view, Lurigio said.

"In a carjacking, you know exactly what you’re stealing," he said. "It’s a profitable crime, with mostly low risk."