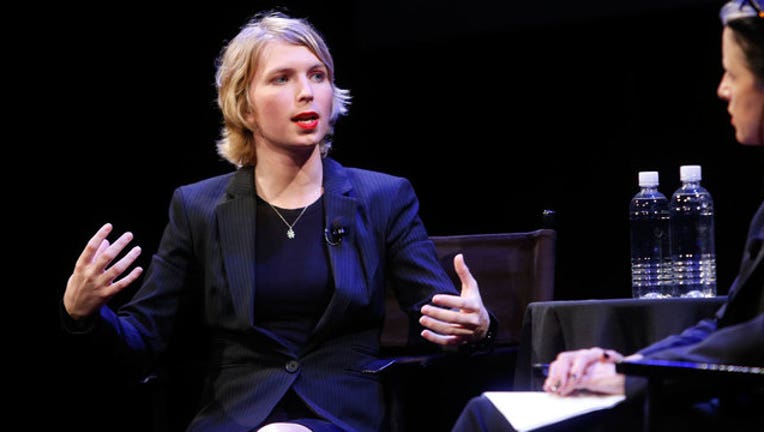 NORTH BETHESDA, Md. (AP) - Chelsea Manning intends to run for the U.S. Senate in Maryland, returning the transgender former soldier to the spotlight after her conviction for leaking classified documents and her early release from military prison.

Manning, 30, filed her statement of candidacy with the Federal Election Commission on Thursday, listing an apartment in North Bethesda as her address.

She is running as a Democrat and will likely challenge two-term Sen. Ben Cardin in the primary. The state's senior senator is an overwhelming favorite to win.

Known as Bradley Manning at the time of her 2010 arrest, the former Army intelligence analyst was convicted of leaking more than 700,000 military and State Department documents to the anti-secrecy website WikiLeaks. She's been hailed as a traitor as well as a courageous hero.

Manning came out as transgender after being sentenced to 35 years in prison. President Barack Obama granted Manning clemency before leaving office last year.

A spokeswoman for Cardin, Sue Walitsky, did not immediately return a phone call. Nor did Fabion Seaton, a spokesman for the Maryland Democratic Party.

Manning would not be the first transgender candidate to challenge a sitting member of Congress.

Kristin Beck, a retired Navy SEAL who is transgender, failed to unseat U.S. Rep. Steny Hoyer in Maryland's Democratic Primary in 2016. Beck got 12 percent of the vote.

"It was too much for me to run for Congress," Beck said in a phone interview Saturday. "I should have run for something lower. She might as well be running for president."

"I totally, 100 percent disagree with everything she did," Beck said. "She's just grabbing headlines. I know what that feels like. I've been in the headlines. You get a sense that you're worthy and doing something that counts. And when you lose that, you try to do something to grab a headline."

Manning was held at Fort Leavenworth, Kansas, where she attempted suicide twice, according to her lawyers.

Obama's decision to commute Manning's sentence to about seven years drew strong criticism from members of Congress and others, with Republican House Speaker Paul Ryan calling the move "just outrageous."

When Manning was released in May, she told The AP in an email that she was eager to define her future — but made no mention of politics.

"I'm figuring things out right now — which is exciting, awkward, fun, and all new for me," Manning wrote.

She added: "I am looking forward to so much! Whatever is ahead of me is far more important than the past."

The Oklahoma native had planned to move to Maryland, where she has an aunt. She has been registered to vote at the apartment in North Bethesda since mid-August, according to the Maryland Board of Elections.

In September, Manning spoke at the annual conference for The Nantucket Project in Massachusetts, a venture founded to bring together creative thinkers to uncover ideas.

Her appearance came just after Harvard University reversed its decision to name Manning a visiting fellow. CIA Director Mike Pompeo had scrapped a planned appearance over the title for Manning, calling her an "American traitor."

Manning told the audience in Massachusetts that Harvard's decision signaled to her that it's a "police state" and it's not possible to engage in actual political discourse in academic institutions.

"I'm not ashamed of being disinvited," she said. "I view that just as much of an honored distinction as the fellowship itself."