A 22-year-old woman is in critical condition after debris from a building fell on her in Wicker Park.

CHICAGO - A lawsuit filed Friday in Chicago accuses a building owner of negligence after a "substantial portion" of the building’s facade crumbled and struck a 22-year-old woman, nearly killing her, the woman’s attorneys said.

On Wednesday, the woman suffered "critical head injuries" when a part of the Wicker Park building fell on her, the lawsuit states. The building is located at 1227 North Milwaukee Avenue.

The victim’s law firm, Romanucci & Blandin, LLC, claims the "near fatal injury" could have been prevented and is likely the result of the building owner’s disregard for safety.

According to the legal team’s preliminary investigation, the Chicago Department of Buildings notified the building owner in March to erect scaffolding and make emergency repairs to the "crumbling" structure. The victim’s attorneys say the owner appears to have taken shortcuts, which led to the injury.

"There is never an excuse for a shortcut to safety and it was clear the owner did not make proper or timely repairs, leading to this needless and nearly fatal injury. This 22-year-old student is facing significant medical challenges and her life has been meaningfully changed because of this clear and utter disregard for safety," Founding Partner of Romanucci & Blandin Antonio M. Romanucci said in a statement. 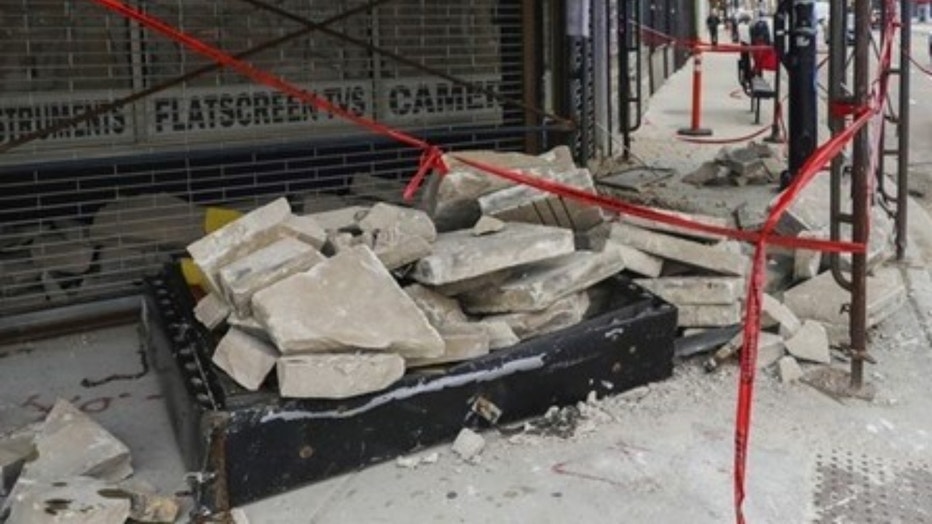 Neighbors in Wicker Park say the building had been crumbling for weeks, according to the law firm.

"If the owner of this property had taken the proper precautions, our client would be celebrating her college graduation in a few weeks and walking across the stage to get her diploma. The owner’s selfish negligence has taken that from her and it’s not clear what her future will look like. We are proud to fight for the justice this young woman deserves," Partner of Romanucci & Blandin Bruno R. Marasso said in a statement.