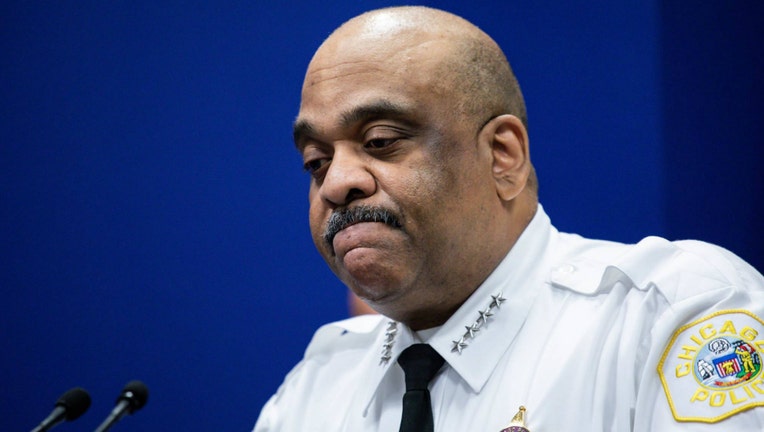 CHICAGO - A female officer who was reportedly caught on video kissing then-Chicago Police Superintendent Eddie Johnson at a popular restaurant in October was transferred weeks later from his personal security detail to another role on the police force, a department spokesman said.

Police spokesman Anthony Guglielmi confirmed to WBEZ that the officer, who was appointed to Johnson's security detail in 2016, was reassigned in early November to the technical services bureau. He said he didn't know if the two had a romantic relationship and couldn't say if the officer's reassignment was connected to one, but that the move was neither a promotion nor a demotion and was not done for disciplinary reasons.

Johnson’s attorney, Thomas Needham, didn't respond to questions about a relationship or the officer’s transfer, the radio station reported.

Mayor Lori Lightfoot fired Johnson on Monday over what she called “ethical lapses.”

Chicago officers found Johnson, 59, asleep in his police SUV early on the morning ofOct. 17. They did not conduct any sobriety tests and let Johnson drive himself home. The Chicago Tribune has reported that Johnson partially rolled down the window, showed his superintendent’s badge and drove away.

Johnson, who is married, initially blamed his failure to take his blood pressure medication and said he had a few drinks with dinner earlier in the evening.

But the Chicago Sun-Times reported that Johnson was drinking for hours that night with the female officer at a downtown restaurant and that sources told the paper that restaurant video showed the two kissing repeatedly. The Tribune reported that an inspector general’s investigation includes video showing Johnson drinking for hours with a woman in a restaurant in the Chicago Board of Trade building. Both newspapers attributed the information to unnamed sources.

Johnson said in a statement after his firing that he “did not intentionally mislead or deceive the Mayor or the people of Chicago.” He acknowledged that he “made a poor decision and had a lapse of judgment on the night of October 16.”

Johnson was set to retire at the end of December after three decades with the Chicago Police Department. Former Los Angeles Police Chief Charlie Beck was named interim replacement.