Ousted Chicago Police Superintendent Eddie Johnson said Tuesday that he didn’t “intentionally mislead or deceive” anyone about the mid-October night he was found sleeping behind the wheel of his SUV.

CHICAGO - Ousted Chicago Police Superintendent Eddie Johnson said Tuesday that he didn’t “intentionally mislead or deceive” anyone about the mid-October night he was found sleeping behind the wheel of his SUV.

Johnson, 59, released a statement through his attorney a day after Mayor Lori Lightfoot fired him for “ethical lapses,” just weeks before he was set to retire. She said an inspector general’s report, which hasn’t been released publicly, revealed he misled her and the public about the circumstances of that evening and showed “flawed decision-making.”

Two Chicago newspapers published reports Monday night that seem to contradict Johnson’s public account in which he blamed an issue with his medication, saying he felt lightheaded while driving home and fell asleep after pulling over. Lightfoot said he’d told her he had “a couple of drinks with dinner.”

One of the newspapers, the Chicago Sun-Times, reported that multiple employees are under investigation for an alleged cover-up the night Johnson was found asleep in his vehicle and the next day. Department spokesman Anthony Guglielmi said he did not know what the inspector general is investigating but that the inspector general’s office has not requested any member of the department’s command staff or any officers be relieved of their police powers or that any other action be taken.

The Sun-Times reported that Johnson, who is one of the most recognizable figures in Chicago, was drinking for hours with a female member of his security detail at a downtown restaurant and that sources told the paper that restaurant video shows the two kissing repeatedly. The Chicago Tribune reported that the inspector general’s investigation includes video showing Johnson drinking for hours with a woman at a Chicago Board of Trade building restaurant. Both newspapers attributed the information to sources they didn’t identify.

“One thing I want everyone to know is this: I did not intentionally mislead or deceive the Mayor or the people of Chicago,” Johnson said in the statement. “I acknowledge that I made a poor decision and had a lapse of judgment on the night of October 16. That was a mistake and I know that.”

Johnson said he has “no interest in fighting a battle” for his reputation after three decades with the police department.

“Reputations are not built in a day and not damaged in a day either,” he said. “I will simply rely on the reputation for integrity that I think I have earned during my long career, with the faith that we should all be judged by the entirety of our lives and not on what happened on our worst days. 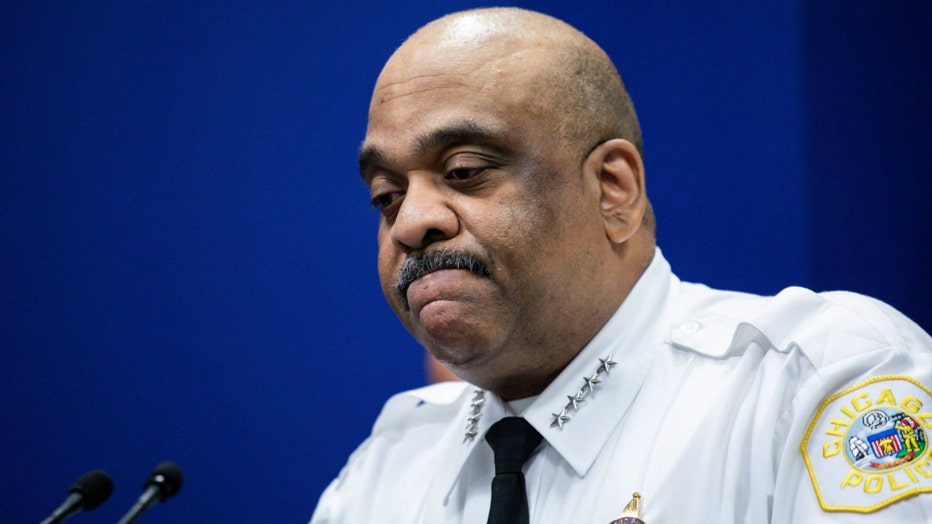 Johnson’s attorney, Tom Needham, said Tuesday that the former police chief would not have comments beyond his statement.

Lightfoot fiercely criticized Johnson Monday for a series of ‘’intolerable” actions, at a City Hall news conference, including lying to her and public about that evening. She said an inspector general’s report, which includes video evidence, showed a different account. She declined to discuss it.

“While at some point, the inspector general’s report may become public and those details may be revealed, I don’t feel like it is appropriate or fair to Mr. Johnson’s wife or children to do so at this time,” Lightfoot said.

Johnson, who during his term as chief has been hospitalized for a blood clot and a kidney transplant, was found in his car by officers early Oct. 17. The officers did not conduct any sobriety tests and let their boss drive home. It was unclear if they would be disciplined. The Tribune reports that Johnson partially rolled down the window on his police vehicle, showed his superintendent’s badge and drove away.

Johnson was set to retire at the end of the month after three decades with the Chicago Police Department. Former Los Angeles Police Chief Charlie Beck, who was named as an interim replacement, took over Monday and spent the day meeting with department officials.

“This is not at all how I envisioned the transition but, and I think this is very important, this will not deter the transition,” he said Tuesday at a news conference on an illegal gun operation. “You know, Superintendent Johnson and I will talk. We have talked. He has the best interests of the city and CPD at heart as do I.”

He said he and Johnson are friends, but everyone has to be accountable.